Memory Market for Autonomous and Connected Vehicles to Grow at 23.9% CAGR during 2020–2030

The demand for a better driving experience is rising around the world, as are the concerns regarding the safety and security of vehicles, passengers, and pedestrians. Similarly, the rates of transition to electric vehicles (EVs) and usage of internet of things (IoT) in automobiles are also high. As a combined effect of all these factors, the global memory market for autonomous and connected vehicles is predicted to experience a 23.9% CAGR between 2020 and 2030, after having generated $4,310.8 million in 2019. 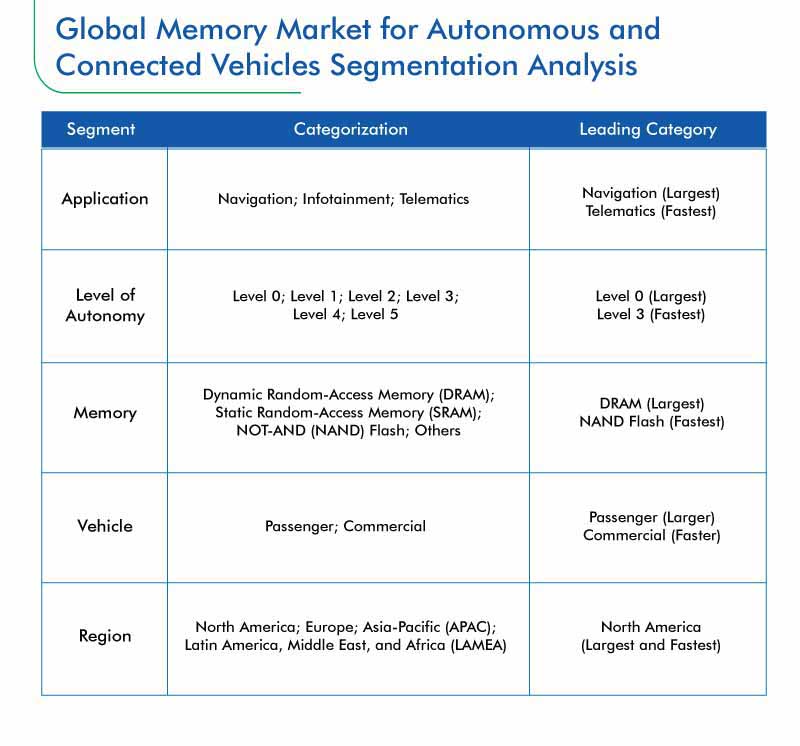 The largest share in the market in the past few years was held by the level 0 category. This is credited to the large number of non-autonomous vehicles in operation and the increasing preference for infotainment and navigation services in these automobiles.

In the last few years, North America has been the most significant user of automotive memory, as a large number of companies offering automobile technology suits and memory chips exist here, primarily in the U.S. Moreover, the continent is witnessing the rapid deployment of autonomous vehicles, driven by the high disposable income of the people.

Players in the global memory market for autonomous and connected vehicles are benefiting from the partnerships between technology companies and automakers, which are together coming up with new tech solutions, which make use of physical and cloud memory.

For instance, in February 2020, Momenta, a Chinese startup developing autonomous driving technology, and Toyota Motor Corporation partnered for developing a high-definition (HD) mapping platform for autonomous vehicles. The automated mapping platform (AMP) being developed by Toyota, for creating data for accurate maps, will be available for industry players as well.

In the same vein, in May 2017, a partnership was formed by NTT DOCOMO INC. and Continental AG to develop 5G mobile device communication technology for futuristic automotive functions, such as connected vehicle infotainment. Under the partnership, the companies will create the foundation of the cellular-based network of vehicle-to-everything (V2X) and 5G connectivity, for wireless communication.