Other than the prevalence of chronic diseases, the incidence of injuries and infections by needlesticks is also rising. Moreover, lancets are being used for the testing of allergies, and governments are pushing for the adoption of single-use lancets. As a result of all these factors, the global lancet market is projected to witness a 9.5% CAGR during 2020–2030 (forecast period), after having reached $830.3 million in 2019. 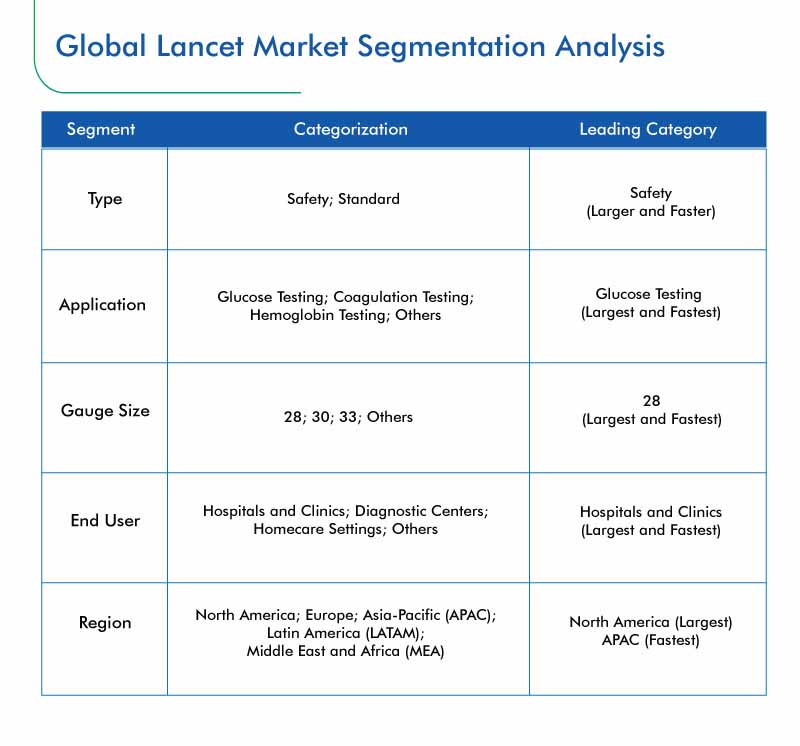 During the forecast period, the safety bifurcation is expected to witness growth at the higher CAGR in the lancet market, because of the rising demand for such variants, as they are intended for disposal after every use. These lancets are designed in a way that after use, the needle automatically retracts, which reduces the risk of accidental pricks and injuries. Moreover, they can be used to prick the capillary without the use of a lancing device, which further makes them popular.

The glucose testing division dominated the lancet market in 2019, due to the increasing number of people being diagnosed with diabetes. As per the World Health Organization (WHO), across the globe, around 422 million people are living with this endocrine disorder, and about 1.6 million die of it each year. For effective diabetes management, it is essential that the units of insulin being administered are regulated, for which measuring the blood sugar level on a periodic basis is necessary.

Till 2030, the fastest growth in the lancet market would be experienced in Asia-Pacific (APAC). This is attributed to the increasing geriatric population, rising purchasing power, bettering healthcare infrastructure, surging incidence of chronic diseases, and high number of initiatives being taken by private and public bodies to make people aware about diabetes. For instance, 6 million people in Southeast Asia have diabetes; of them, 90% have type 2 diabetes, according to the WHO. Similarly, as per the United Nations Economic and Social Commission for Asia and the Pacific (UNESCAP), by 2050, one in four people in APAC will be over 60 years old.

In recent years, a number of new and improved products have been launched by the lancet market players, as a means to expand their portfolio and offer customers better blood testing solutions.

For instance, in October 2019, the OneTouch Delica Plus series of lancets was launched by LifeScan Inc. These lancets are coated with silicone, which allows them to glide smoothly through the skin, to the capillary.

In the same vein, Owen Mumford Ltd. launched Ateria SafeControl, which is an improved variant of its safety pen needle, in September 2019. This active safety pen needle has been designed for doctors and other healthcare professionals, who predominantly use injection pens to administer medication, particularly insulin. While letting healthcare professionals control the injection process better, this product also protects them from needlestick injuries.