Hydrogen Storage Market to Generate Revenue Worth $991.7 Million by 2026

This category is further expected to grow fastest in the market during the forecast period, owing to its ability to be stored in tanks. With this type of storage, hydrogen can be used later as and when required for applications in crude oil refining, metal working, transportation, and ammonia production, along with several other uses.

A recent trend observed in the hydrogen storage market is the investments by governments across several countries to develop new hydrogen storage technologies. For instance, in October 2015, the U.S. Department of Energy awarded two new research projects to Berkeley National Laboratory (Berkeley Lab) for the development of next-generation fuel cell and related energy-conversion technologies, optimizing the performance and durability of fuel cell technologies, and to find new materials for hydrogen storage.

The increasing shift toward lower emission fuels in China, India, and Southeast Asia is likely to drive the growth of hydrogen storage during the forecast period. The implementation of strict emission standards in the U.S. the U.K., and several other countries are likely to create awareness among consumers toward the significance of using clean energy and low emission fuels. According to the Environmental Protection Agency (EPA), as of 2015, the U.S. had over 10,000 fuel stations, providing alternative fuels such as hydrogen fuels. This number is expected to increase during the forecast period, in turn, further spurring the growth of the hydrogen storage market. 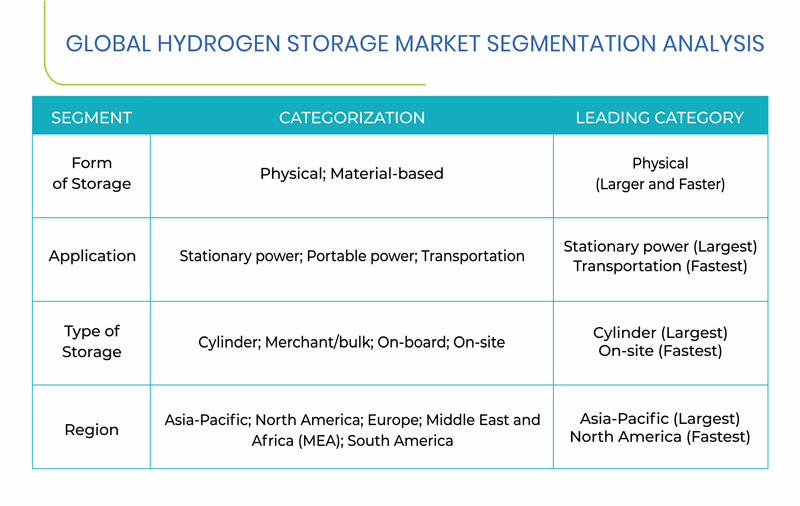 The physical category, on the basis of form of storage, accounted for the largest share in 2015 in the hydrogen storage market. Also, this category is expected to demonstrate faster growth during the forecast period. This can be attributed to the usage of stored hydrogen for future requirements in a wide range of end-use applications, including ammonia production, crude oil refining, metal working, glass production, and transportation.

The transportation category on the basis of application is expected to demonstrate the fastest growth during the forecast period in the hydrogen storage market. This is majorly ascribed to the increase in adoption of stored hydrogen for usage as a fuel in ships and aircraft.

The cylinder category in terms of storage type accounted for the largest revenue share in 2015, and the trend is likely to continue throughout the forecast period. This can be attributed to the growing demand for cylinder-based hydrogen storage from end-use industries, such as metal working, food, and electronics industries.

Collectively, Asia-Pacific and North America held a share of nearly 70% in the global hydrogen storage market in 2015. This is ascribed to the increasing usage of hydrogen for production of methanol. In addition, increasing adoption of hydrogen-based fuels in order to abide by government regulations is expected to further propel the market in China, India, Malaysia, and other countries during the forecast period.

In order to garner a larger share, market players are involved in several strategic developments. For instance, in December 2015, Worthington Industries Inc. entered into multi-year agreement with Teijin Engineering, under which the former would supply hydrogen tanks to a major Japan-based automotive original equipment manufacturer for new fuel cell vehicles.