Overall GDP per capita of nations across the globe is increasing, which indicates an increase in individual spending. According to the World Bank data, GDP of the U.S. was $18.2 trillion in 2015, which increased to $20.5 trillion in 2018. This growing GDP is expected to augment the growth of the private healthcare insurance industry in the coming years. In addition, a significant amount of GDP is spent on healthcare and associated services, which is also a key factor supporting the demand for private healthcare insurance plans.

These countries are currently witnessing significant increase in geriatric population. According to the United Nations Department of Economic and Social Affairs (UN DESA), in France, 25.7% of the total population was aged 60 years and above in 2017, which is expected to reach 32.2% by 2050. Additionally, this age-group accounted for 23.9% of the total population in the U.K. in 2017, which is expected to reach 31.5% by 2050. The geriatric population is expected to rise faster than the younger age groups across all studied countries. Elderly population is prone to suffer from various chronic diseases, which at times require surgical intervention. Therefore, to meet these medical costs, the aging population is opting for healthcare insurance.

The private healthcare insurance industry is expected to witness significant growth in major countries, such as the U.S., Germany, France, the U.K., China, and Brazil. These countries have a number of giant players offering private healthcare plans.

According to the Association of the German Insurance Industry, the German insurance market held 4.6% of global insurance premiums in 2017, and is the sixth largest in the world in terms of premium income. This is ascribed to the economic stability and supplementary long-term care insurance. In 2016, the insurance portfolio in the country reached about 434.9 million policies. The German healthcare insurance industry is marked with the presence of private healthcare insurance providers, such as Allianz SE, AXA Group, Assicurazioni Generali S.p.A., Globality S.A., HUK-COBURG Insurance Group, SIGNAL IDUNA Group, HanseMerkur Krankenversicherung AG, Barmenia, Debeka Group, and Continentale Krankenversicherung.

The French insurance sector saw marginal premium growth in 2017, largely due to the economic recovery and political and regulatory uncertainty. According to the French Insurance Federation, insurance premiums rose by 1.4% in 2017. In the same year, sickness and personal injury accident insurance achieved the strongest growth, of 4.8%; property and casualty (P&C) insurance grew by 2.3%, particularly in personal lines; and life, health, and protection insurance rose by a mere 1.1%. Since 2012, the industry has shifted toward unit-linked and capital-light products, and away from traditional guaranteed-return savings offerings. Many private insurance companies are seeking to differentiate themselves and find new ways for growth, and they are developing new health and protection offerings. Some of the major private healthcare insurance companies operating in the French market include Allianz SE, AXA Group, CNP Assurances Group, Continentale Krankenversicherung, Assicurazioni Generali S.p.A., Ag2r La Mondiale, MGEN Group, GIE BNP Paribas Cardif, Malakoff Mederic Humanis Group, and Aviva plc.

In the U.K., around 11% of the population has some form of voluntary healthcare insurance (VHI) or private medical insurance plans. Some private healthcare policies (whether company-paid or provided, or individually paid) also cover maternity and mental health coverage. Moreover, the level of coverage varies significantly among different types of policies. The VHI plays significant role in providing access to a broad range of benefits available through the National Health Service (NHS). It provides facilities to select choice of private provider (private hospital or private wing of an NHS hospital), and specialist acting in a more comfortable care environment. The VHI also offers benefits that are not covered by the NHS, including coverage for complementary and alternative therapies. In the supplementary VHI market, British United Provident Association Limited, AXA Group, Aviva plc, and Vitality Corporate Services Limited are the major players, holding around three-fourth shares of the market.

In China, around 95% of the country’s 1.4 billion population is covered by basic, government-sponsored health insurance. The country stands only one rank behind the U.S in terms of total healthcare expenditure. Recently, a rise has been seen in the demand for health insurance as the country is witnessing aging population, increasing healthcare expenditure, changing consumer habits, digitalization, and greater private sector offerings. According to an article from Daxue consulting, during 2014–2018, the compound annual growth rate of China’s commercial health insurance was 36%, 17% for life insurance, and 11% for property and casualty insurance. This is due to two reasons: economic development and limitations of the national medical insurance. As China’s economy is developing, more people are interested to spend more money on healthcare, including private health insurance. Allianz SE, AXA Group, Ping An Insurance (Group) Company of China Ltd., China Life Insurance Co. Ltd., New China Life Insurance, China Pacific Life Insurance Co. Ltd., Cigna Corporation, MSH China, British United Provident Association Limited (Bupa), and Assicurazioni Generali S.p.A. are some of the major private healthcare insurance providers operating in the country. 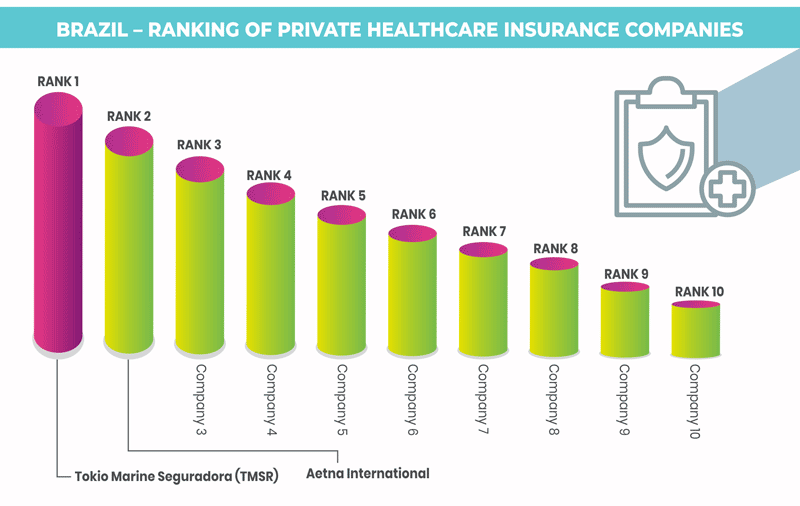