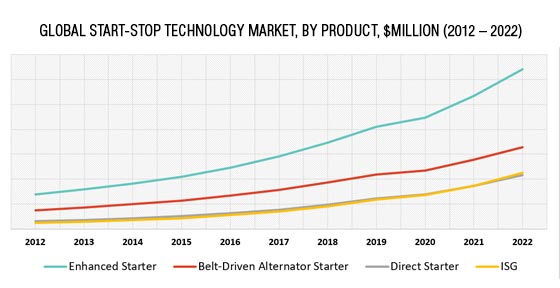 The factors driving the growth of the market include increasing need for fuel efficient vehicles and stringent emission control norms globally. In North America, Environmental Protection Agency (EPA) introduced emission standards for cars and light trucks. According to the target set by EPA, the permissible emission from a passenger car should not exceed 225 grams per mile (g/mi) in 2016. The planned permissible emission limits for passenger cars is 143 g/mi for 2025 in North America. Additionally, the permissible combined fuel economy for cars and trucks was 35.5 miles per gallon (mpg) for 2016, which is expected to increase up to 54.5 mpg by 2025 in North America. According to the government regulation in Europe, the average emission level from new cars reduced by 160 grams per kilometer (g/km) during 2006 - 2012. The regulation requires reducing the emission levels from new cars to 95 g/km by 2020. Such stringent regulations have resulted in increasing use of start-stop technology by automobile manufacturers.

Additionally, the Organization of the Petroleum Exporting Countries (OPEC) imposed new regulations on its members and restricted the production and export of crude oil. Such initiative has a negative impact on the crude supply to the developing countries including India, Brazil and China which mainly rely on crude imports. These imports could be reduced by increasing fuel efficiency in vehicles through the use of start-stop technology, which leads to its increased demand.

The research states that the global start-stop technology market had a consolidated structure in 2015, where the top six competitors accounted for a major share of the market. Some of the key players in the global market include Robert Bosch GmbH, Continental AG, Denso Corporation, Delphi Automotive PLC, Johnson Controls, Inc, Hitachi, Ltd., Mitsubishi Electric Corporation, Valeo SA, and BorgWarner Inc.