Solar Encapsulant Market to Generate Revenue Worth $4,555.4 Million by 2023

Historically, the polyvinyl butyral (PVB) category exhibited fastest growth among all materials and is projected to maintain the same trend during the forecast period. The market growth in this category is mainly driven by the increasing demand for laminated safety glass in the aerospace, automotive, and architectural industries.

Rising Awareness about the Advantages of Solar Cell Technology

Increasing awareness about the advantages of solar cell technology is one of the major factors driving the solar encapsulant market. This technology helps meet energy needs in both private and commercial sectors as renewable source of energy. Additionally, with increase in the awareness regarding green construction, people have shifted their focus on sourcing power from solar energy, owing to its benefits, such as low maintenance costs, availability of state tax credits, and renewable energy source. This is leading to an increase in the demand for solar products. 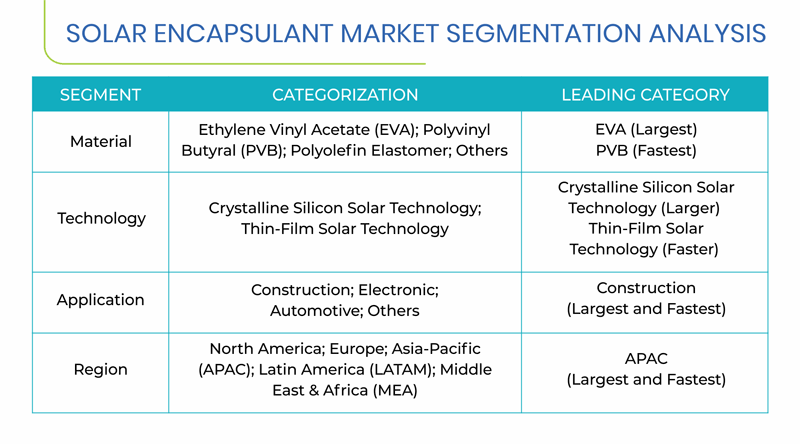 The EVA category held the largest share in 2017 in the solar encapsulant market, among all materials. Owing to several properties, such as elasticity, high adhesive strength, and protection against corrosion and delamination, EVA is highly preferred over other encapsulating materials for application in Photovoltaic (PV) cells.

The thin-film solar technology category is witnessing the fastest growth in solar encapsulant market during the forecast period. This is mainly attributed to the low consumption of resources (raw material) for the production of solar cells, consequently, large-scale production of modules is possible at lower cost.

The construction category in terms of application held the largest revenue share in 2017 in the solar encapsulant market. Also, it is projected to maintain the same trend during the forecast period. This can be attributed to the increased rooftop panel installation in the construction industry in response to growing awareness of benefits of renewable energy.

North America and APAC are expected to account for over 60% share in the global solar encapsulant market by 2023. This can be mainly attributed to the presence of established players, increase in the solar panel installation in residential and commercial buildings, and increase in the number of solar cell production units.

Other geographies, which include Europe, LATAM, and MEA, also hold considerable shares in the solar encapsulant market, on account of the presence of prominent encapsulant film manufacturers, increase in investments in the solar cell technology, increasing government initiatives toward solar energy development.

Germany is expected to lead the European solar encapsulant market, generating revenue of over $218.7 million by 2023. This can be mainly attributed to the presence of prominent encapsulant film manufacturers and increase in investments for research and development of solar materials.

Brazil is the fastest-growing market for solar encapsulant in the LATAM region. Inefficient electricity networks and increasing government initiatives toward solar energy development are the major factors contributing to the growth of the market in Brazil.

Growing demand for PV technology and products, and favorable demography and geography have made parts of the MEA prime locations for solar power installation. Saudi Arabia is expected to hold a considerable share in the MEA solar encapsulant market in the forecast period.

In July 2016, Suzhou Zhongkang Power, a subsidiary of Jiangsu Akcome Science & Technology Co. Ltd., invested $150.57 million (RMB 1 billion) for the building of three PV power stations, with a combined installed capacity of 110 MW. The investment aimed at expanding the company’s solar power business in the country and increasing its presence at the global level.