Globally, the APAC region is expected to witness the fastest growth in the industry during the forecast period both in terms of volume and value. This can be mainly attributed to an increase in the production capacity of solar modules by key manufacturers in the region. In recent years, the price inflation of solar products in Europe resulted the shift of module manufacturers from Europe to China. According to the National Energy Board data of 2016, China expanded its PV power generation capacity by 34.54 GW.

Moreover, favorable governmental policies and easy availability of low-cost skilled labor in this region have led to the growth of the APAC solar encapsulant market. 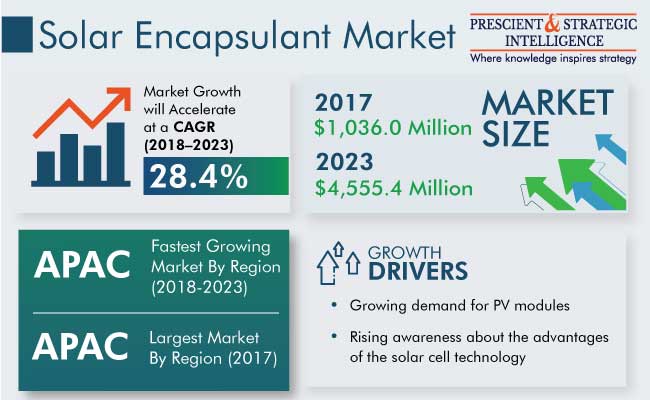 A major factor driving the growth of the solar encapsulant market is the growing demand for PV modules, which convert solar energy in electrical energy through solar cells. Following this, solar material manufacturers have increased their production capacity. Owing to their benefits, such as economic viability, and ability to provide environmentally sustainable solutions, many countries have increased their production capacity of PV modules. For instance, according to the China Photovoltaic Industry Association (CPIA), in 2016, China increased its solar panel production capacity to 48 gigawatt (GW), which is expected to reach 110 gigawatt (GW) by 2020.

There have been continuous research and development activities in the solar energy sector, particularly solar cell technology, for efficiency improvement and durability of solar cells. This has resulted in the development of third-generation PVs that possess the potential to overcome current efficiency and performance limits. Growing energy requirements and technological advancements in the solar PV module industry have led to sharp decline in the price of these materials in recent years. This scenario attracts heavy investments by investors for the development of solar PVs, which generates ample growth opportunities in the solar encapsulant market.

The ethylene vinyl acetate (EVA) category in terms of material held the largest revenue market share, generating $724.5 million, in 2017. Since EVA provides excellent elasticity and toughness, efficient adhesive strength, and strong protection against corrosion and delamination, it is highly preferred over other encapsulating materials for application in PV cells.

The crystalline silicon solar technology category is expected to exhibit the faster growth with a CAGR of 28.1% during the forecast period in the solar encapsulant market. This is mainly due to its ability to provide high conversion efficiency and quick payback in terms of energy savings, owing to which its demand is expected to increase.

The APAC region accounted for the largest share in the global solar encapsulant market during the historical period and is expected to maintain the same trend during forecast period as well. This can be owing to an increase in the production capacity of solar modules by key manufacturers in the region. According to Energy Trend, in 2017, the global PV installation production capacity was 70.3 GW, of which China accounted for 31%. Considering the future industry scenario, China is expected to lead the APAC region market, generating revenue worth $1,097.9 million in 2023. 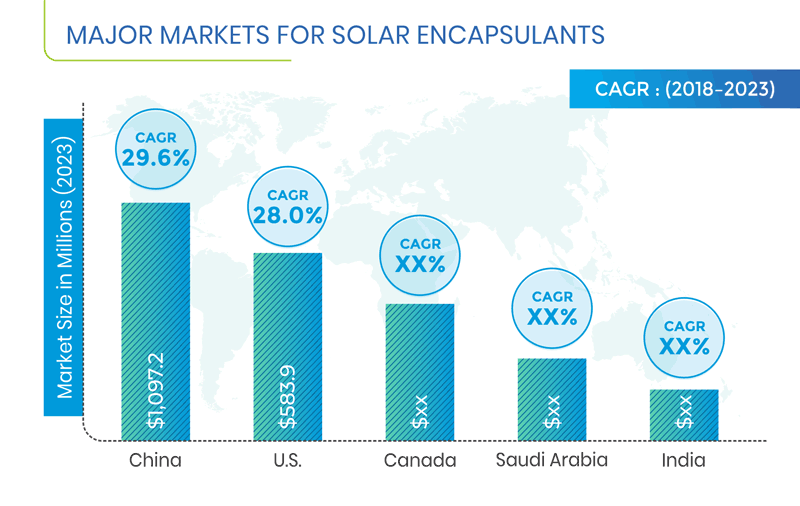 In recent years, major players in the solar encapsulant market have taken several strategic measures, such as product launches and investment aimed at expansions, to gain competitive edge in the industry. For instance, in July 2016, Suzhou Zhongkang Power, a subsidiary of Jiangsu Akcome Science & Technology Co. Ltd., invested $150.57 million for building three PV power stations, with a combined power generation capacity of 110 MW.