Seasonings and Spices Market to Generate Revenue Worth $30.4 Billion by 2023

The sesame category held the largest share in the whole seasonings and spices market in 2017. The high consumption of sesame in Asian countries and Mediterranean cuisine is the major factor driving the growth of this category.

Online or internet advertisement requires the use of the internet for providing marketing solutions to spice companies through digital marketing and social media. Many seasonings and spices companies have started online advertising campaigns to encourage consumers to create new recipes at home. In order to gain popularity and increase consumer engagement, many firms are adopting different ways, such as creating their own apps for product recipes, organizing online contests, and posting content on social media, which would further help in establishing brand identity in the minds of customers, which is becoming a key seasonings and spices market trend. For instance, in December 2013, McCormick & Company Inc. launched the “Flavor of Together” campaign and asked people around the world to share their "flavor stories," including recipes and family traditions, through a dedicated site (FlavorofTogether.com), an app, Facebook, Twitter, and Pinterest.

Increasing Awareness on Medical Benefits of Spices is Driving the Market

Due to the various advantages of seasonings and spices in the management of various diseases and disorders, consumers are increasingly preferring them around the globe. Further, as consumers are increasingly preferring a natural, sound, and eco-friendly way of life, the demand for seasonings and spices is increasing substantially. For instance, the use of cinnamon helps lower blood sugar levels and heart disease risk factors. Similarly, eating sesame seeds helps improve the blood pressure and heart health, fight cancer, balance hormones, burn fat, and enhance nutrient absorption. Hence, the increasing use of spices for their benefits to the overall health is driving the seasonings and spices market. 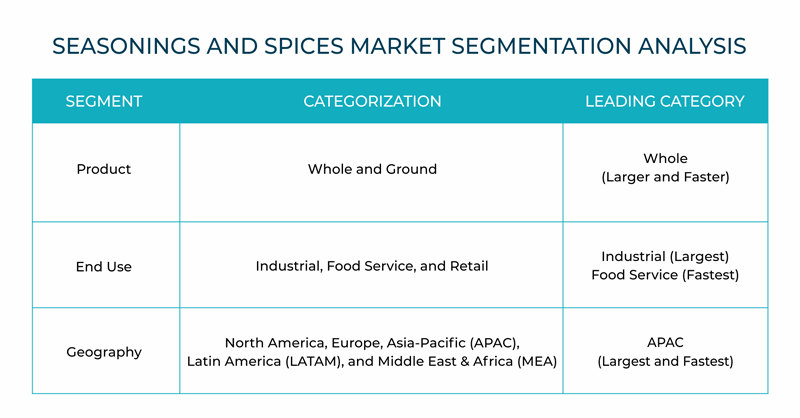 Other regions, which include Europe and North America, also hold considerable shares in the global seasonings and spices market. This is due to the huge consumption of a variety of spices, such as chili, vanilla, turmeric, and black pepper. For instance, Brazil is a major producer of pepper, capsicums, and cloves in the region. Moreover, due to the increasing preference of the Brazilian population toward spices, various ingredients, such as garlic and cardamom are being imported to the country, from the trade hub of Latin America.

In 2017, Fuchs Group acquired Bart Ingredients Company Limited, the second largest spice and herb company in the U.K., to expand its international reach and presence in the country.