Electric motors are widely used in various applications such as industrial machines, household appliances, HVAC applications, and motor vehicles. Rising industrial activities as well as growing demand for electric vehicles across the globe are among the major factors pushing the growth of electric motors during the forecast period. 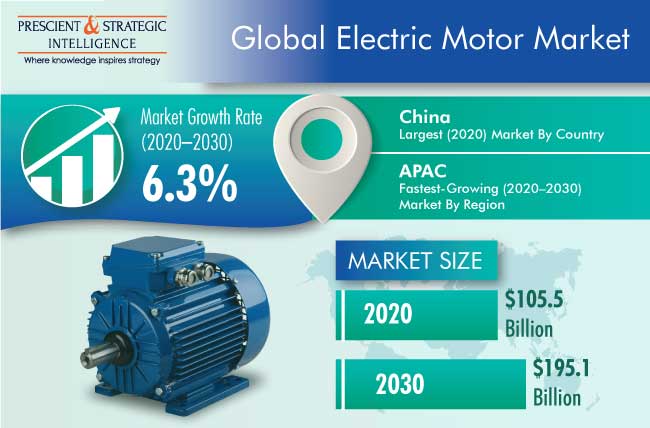 Based on motor type, the electric motor market is categorized into AC motor, DC motor, and hermetic motor. AC motor accounted for the largest market share in terms of revenue in 2017, and is further expected to lead the market during the forecast period. AC motors are deployed for variety of applications, ranging from heavy industrial machineries to household appliances. Their constant high rotary speed makes them useful in a wide range of applications, namely railway traction mechanisms, high-power engineering and commercial drill machines, industrial and kitchen blenders, vacuum cleaners, dryers and trimmers.

In terms of DC motor, the market is bifurcated into brushless and brushed DC motors. Owing to its advantages such as better speed control, higher efficiency, no sparking, longer lifetime, higher torque to weight ratio, more reliability, and less noise, brushless DC motor category contributed higher revenue share in 2017. The growth of this category is further expected to be driven by surge in demand for more efficient, more controllable, durable, and low noise electric motors in industrial applications such as actuators, feed drives for computer numerical control (CNC) machines, industrial robots, extruder drives, and others.

On the basis of application, the electric motor market is categorized into motor vehicles, industrial machinery, HVAC equipment, transportation, and household. Motor vehicles category was the application area for electric motors in 2017, and this category further expected to register highest CAGR during the forecast period. The growth would be owing to the exponential surge in demand for electric vehicles. For instance, according to Organisation Internationale des Constructeurs d'Automobiles (OICA), the production of motor vehicles in 2017 was 97 million units, up by 2.4% over 2016.

Globally, APAC was the largest market for electric motors, contributing over 55% revenue share to the electric motor market in 2017. This can be attributed to growing demand for electric vehicles predominately in China, due to government initiatives and environmental regulations in the country. The region is further expected to exhibit highest growth rate during the forecast period owing to increasing government incentives supporting adoption of electric vehicles, and rising demand for HVAC equipment from real estate sector in countries such as China, India and South Korea.

Rising concerns pertaining to reducing energy consumption and pollution, and the need to develop and implement high energy efficient motors expected to increase the demand for super premium efficient IE4 electric motors during the forecast period. The IE4 electric motors are 14% more efficient than IE1 motors and 3% than IE3 motors. These motors are designed for line operation (DOL) and can also be operated with frequency converters. Hence, demand for high energy efficient motors and development of IE4 motors, would create wide opportunities for motor manufacturers in the coming years.