Digital Oilfield Technology Market to Generate Revenue Worth $34,871.6 Million by 2023

The production optimization category, by process, is expected to exhibit the fastest growth during the forecast period. The digital oilfield technology market growth in this category is mainly driven by the rising number of mature fields, resulting in the need for enhanced technologies, to optimize the production of crude oil from such sites.

Technological Advancements by Major Players are Trending in the Market

Globally, the increasing demand for energy has significantly raised the oil and gas exploration and production (E&P) activities. In order to meet the requirements, major players are actively advancing their technology portfolio to battle competition, innovate, and help of E&P firms maximize the revenue from existing and upcoming assets. To meet the demand, several players, such as Baker Hughes, a GE Company, and Schlumberger N.V., are working on the innovative digital solutions to allow E&P companies to increase their production, which, in turn, is boosting the digital oilfield technology. Further, to cater to the increased demand, these companies have taken a transitional shift toward advanced digital oilfield technology. The digital oilfield technology supports E&P companies during well development as well as at the time of production, by providing real-time analysis from all parts of the oil and gas value chain.

Growing Production of Shale Gas is Driving the Market Growth

Over the years, there has a been a significant rise in the shale gas production in the U.S., which requires large amounts of data regarding climate, topography, drilling and production, and seismic activities. According to the U.S. Energy Information Administration (EIA), in 2017, about 16.76 trillion cubic feet (Tcf) of dry natural gas was produced from shale reserves in the U.S., accounting for about 60% of the country’s total dry natural gas production. In addition, the growing technological advances in horizontal drilling and multistage fracturing are translating into an increasing production of shale gas, and in due process, driving digital oilfield technology market. 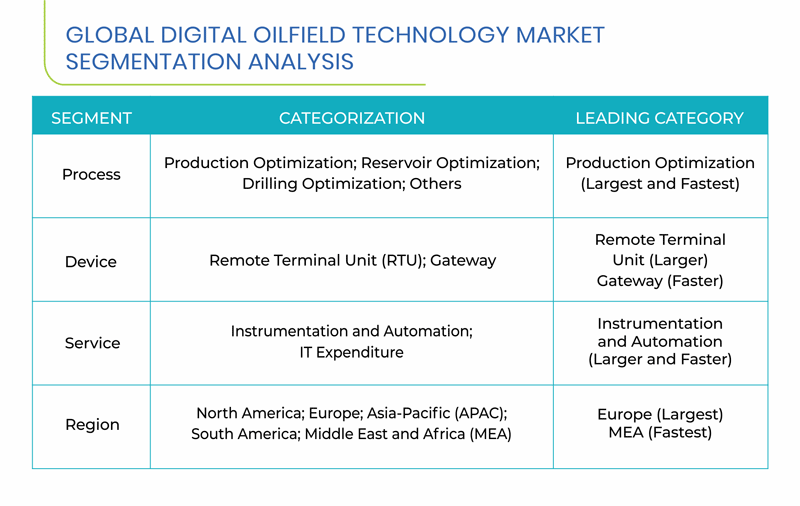 In 2017, production optimization held the largest revenue share, of over 35.0%. This is mainly attributed to the high number of mature fields, which is resulting in the need for enhanced oilfield technologies, in order to extract the crude oil.

RTUs accounted for the larger market share in 2017, owing to the high-volume adoption of these systems in remote onshore and offshore facilities.

Instrumentation and automation category by services is predicted to witness faster growth during the forecast period (2018–2023). This is attributed to the significant demand for cost-effective devices and equipment, such as distributed control systems, supervisory control and data acquisition (SCADA), sensors, and safety systems.

In 2017, together, North America and Europe accounted for nearly 60.0% revenue share in the global digital oilfield technology market. This is mainly attributed to the large number of oilfields, growing E&P activities for shale gas, high capital investments, and integration of advanced technologies by the E&P firms in these regions.

Other regions, which include APAC, South America, and MEA, also hold considerable shares in the global digital oilfield technology market, on account of technological advancements and the discovery of new reserves, which, in turn, are boosting the adoption of such solutions.

The digital oilfield technology market is consolidated in nature, with Schlumberger N.V., Siemens AG, Honeywell International Inc., Baker Hughes, and Halliburton Company being some of the major players.

In August 2017, Microsoft and Halliburton Company announced plans to enter into a strategic alliance, to drive digital transformation across the oil and gas industry. This relationship is combining Microsoft’s expertise in cloud and digital transformation with Halliburton’s E&P science, software, and services. Furthermore, in January 2017, Schlumberger N.V. announced the acquisition of Peak Well Systems (Peak), a designer and developer of advanced downhole tools for flow control, well intervention, and well integrity, which is assisting the former company in expanding its mechanical offerings. Strategic partnerships such as this are helping in the growth of the digital oilfield technology market around the world.