The pneumatic control valve category is also expected to witness the fastest growth during the forecast period, mainly due to pneumatic valves’ ability of providing precise linear motion and usability in a wide temperature range.

Development of New Valve Technology the Key Trend in Market

Historically, control valves weren’t integrated with a chip or processor, therefore had to be operated manually. But, with an increase in the demand for energy, the power sector is realizing the need to better its performance, which is why control valves equipped with processors are becoming a major control valves market trend. Such variants offer data about their operating condition and flow rate in real time, which helps in getting them repaired before an unexpected shutdown. For instance, in June 2017, Velan Inc. introduced the new Securaseal R-series cast metal-seated ball valve at the Valve World Expo in Houston, Texas. The new R-series ball valves are suitable for most processes involving fluid slurries and high temperatures.

With an increase in the population, the demand for energy rises, which leads to the expansion of the power sector. In order to keep the demand–supply gap as narrow as possible, it is important that the equipment engaged in producing, processing, and transporting the energy is upgraded. This requirement is being met by control valves, which is helping the control valves market prosper. 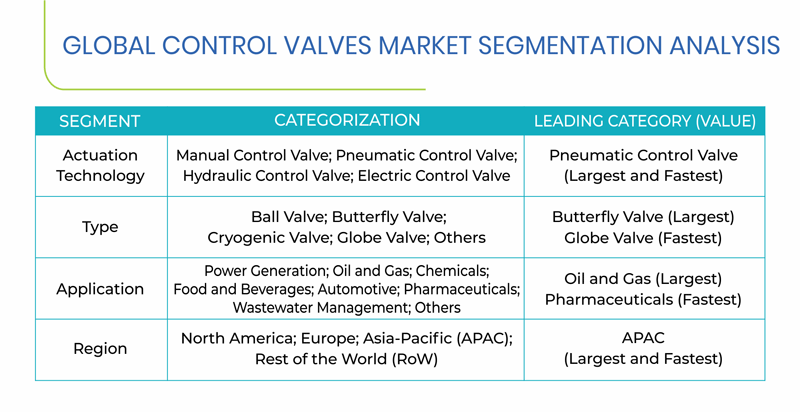 The butterfly valve category held the largest share, in terms of volume, during the historical period (2013­–2017), by type, as such variants are compact and when actuated, can be opened and close quickly. Further, butterfly valves control the fluid flow precisely, which is why they are preferred in an array of industrial applications.

The pharmaceuticals category, by application is expected to witness the fastest growth during the forecast period, as the pharmaceutical industry is subject to stringent safety standard to reduce risk and simultaneously increase operational efficiency. Control valves aid manufacturers in bolstering their manufacturing operations to minimize the uncertainties and maximize efficiency.

Together, North America and APAC accounted for over 65.0% revenue in global control valves market in 2017. This is attributed to the demand for control valves from numerous industries, for maintaining production and flow rate of fluid. Furthermore, the discovery of new oil and gas fields and rising investments in the oil and gas industry, to cater the surging energy demand, also contribute in the increasing adoption of control valves in these regions.

Europe also holds a significant share in the global control valves market, on account of the rising demand for power, with the increase in the economic standards. This has led to the setting up of new power generation plants, which use control valves to maintain the flow of the raw materials.

In April 2017, Emerson Electric Co. acquired Pentair plc’s valves & controls business, in a $31,500 million deal. The acquisition serves to grow Emerson Electric Co.’s global footprint in automation and expand its presence in key markets, such as chemical, power, mining, and oil and gas.