Cell Isolation Market to Generate Revenue Worth $12.6 Billion by 2023

The global cell isolation market was assessed to be $4.6 billion in 2017 and is further projected to generate $12.6 billion revenue by 2023, growing at a CAGR of 18.8% during the forecast period (2018–2023). The consumables product category dominated the market, primarily on the account of growing requirement of media, various reagents, beads, sera, kits, and disposables as these products are essential for carrying out cell isolation.

Increasing government funding and investment has led to greater availability of technologically advanced processes for cell isolation and biopharmaceutical production. These advances result in increased demand for cell separation procedures, thereby boost the cell isolation market. The use of cell therapies is on the rise for treating neurological diseases, stroke, renal, amyotrophic lateral sclerosis, spinal cord injury, skeletal, and autoimmune diseases, such as type 1 diabetes, Crohn’s disease, and multiple sclerosis. Globally, government funding for cell-based research is growing due to its ability to treat and control conditions such as cancer and other chronic diseases.

In the recent years, governments have shown their interest and increased funding toward developing new and efficient cell isolation procedures or biopharmaceuticals for diagnostic and treatment purposes. In 2015, Governor of New York Andrew M. Cuomo awarded $36 million to three research groups for the development of stem cell research for the treatment of sickle cell anaemia, ovarian cancer, and cord blood collections. Also, biotechnology firm OmiX Labs is funded by the Indian government under Biotechnology Ignition Grant. All these factors showcase the rise of such therapies in the treatment of cancer and other chronic diseases, which, in turn, drives the growth of the cell isolation market. 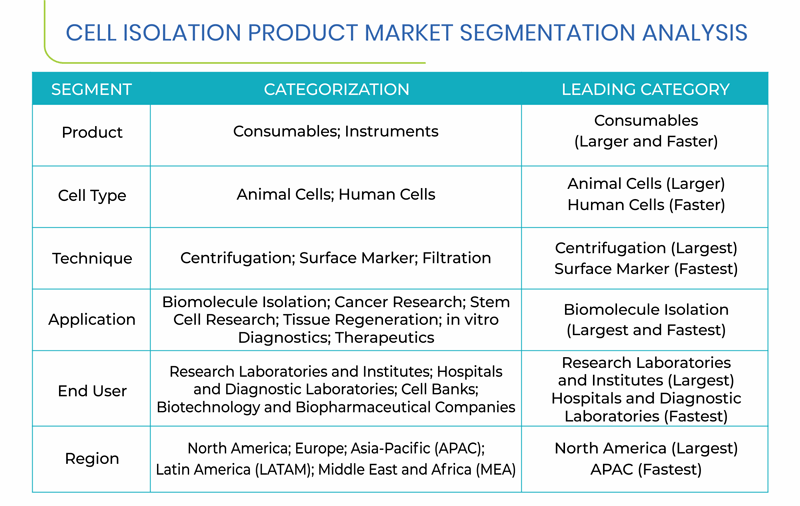 Together, North America and Europe accounted for 68.8% of the global cell isolation market size in 2017. This is due to the existence of a significant number of research institutions, academic institutes, pharmaceutical and biotechnology firms, as well as hospitals and testing laboratories, performing extensive research using cell isolation methods and consumables.

APAC is expected to witness fastest growth during the forecast period, mainly due to rising focus of researchers on applied and basic research. In 2017, Japan held the largest market share in the APAC region. This is primarily attributed to advanced healthcare infrastructure, the presence of a large number of research institutions, government funding for basic and applied research, and the availability of technologically advanced cell isolation products.

The Brazilian cell isolation market is projected to grow at a lucrative rate during the forecast period, due to the increasing life science–related research activities and developing healthcare infrastructure. For instance, in May 2013, São Paulo Research Foundation announced a long-term investment of $680 million for 17 academic centers known as Research, Innovation and Dissemination Centers (RIDCs).

South Africa is expected to witness fastest growth in the cell isolation market in the MEA region, primarily due to the rising government initiatives to improve the healthcare facilities.

Additionally, mergers, acquisitions, and collaborations are the key strategies adopted by the leading companies for sustainable market growth. For instance, in February 2017, Thermo Fisher Scientific Inc. acquired Finesse Solutions Inc., a player of scalable control automation systems and software for bioproduction, with an undisclosed amount. The business was integrated into Thermo Fisher’s Life Sciences Solutions Segment.