The global cell isolation market had the value of $9,845.7 million in 2022, and the size is predicted to reach $34,746.3 million by 2030, advancing at 17.1% CAGR during 2022–2030. It is driven by the rising demand for biopharmaceuticals, increasing government funding for cell-based research, and growing research on personalized medicine.

Germany is a one of the major contributors in the market. Cell isolation products are widely used by researchers in R&D facilities and research laboratories for various applications including biomolecule isolation, cancer research, stem cell research, and tissue regeneration. Thus, presence of large number of research institutes and biotechnology companies in the country is the foremost factor promoting the growth of the industry in the country.

Increase in investments and fundings by the government has led to an increase in the availability of technologically advanced processes for this technique and biopharmaceutical production. These advancements have resulted in an increased demand for cell separation procedures, thus boosting the market. The usage of cell-based therapies is on the rise for the treatment of neurological diseases including, amyotrophic lateral sclerosis, Parkinson's disease. In recent years, there has been an increase in the funding from government organizations for cell-based research owing to its ability to treat and manage cancer and chronic diseases. 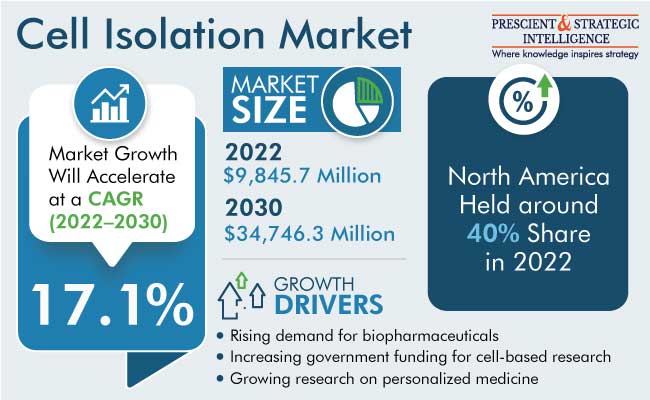 Centrifugation technique accounted for the highest revenue share, around 40%, in 2022. It is the most often used technique in biological sciences for particle/microorganism separation via centrifuge. Particles are separated, based on their size, shape, density, medium viscosity, and rotor speed. 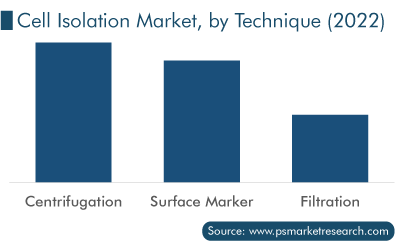 Biomolecule Isolation is Dominating the Market

The biomolecule isolation category will grow the fastest during the forecast period progressing at a CAGR of around 20% for biomolecule isolation application as there has been an increasing interest of pharmaceutical companies in the development of drugs based on biomolecules due to their fewer side effects compared to small molecules. Since biomolecules are essential in many biological activities, including disease development, reliable detection of biomolecules is vital for disease diagnosis and therapy. Also, the focus on biological compounds as medicine is increasing. It contributes to new developments in gene and cell therapies, immunotherapies, and antibody-drug conjugates.

North America was the largest market for cell isolation products, contributing around 40% in 2022. The largest share of the market is attributable to the presence of large number of research laboratories, academic institutes, pharmaceutical and biotechnology companies as well as hospitals and diagnostic laboratories, which carry out extensive research that utilizes cell isolation instruments and consumables.

The cell isolation product manufacturers are majorly focusing on development, commercialization, and distribution of advanced products to cater the needs of researchers and healthcare professionals.

Increasing focus on biomedical, stem cells, and cancer research is a key factor contributing toward its largest share. The increasing prevalence of chronic diseases such as cardiovascular diseases will fuel growth of the industry. Prevalence of cancer is increasing, thus, there is increasing focus on cancer and stem cell research. Stem cell therapy is the most promising technique to treat severe medical conditions, including cancer and blood diseases. Thus, biotechnology and biopharmaceutical companies are adopting advanced cell separation products, such as magnetic beads for the research and development of stem cells, which is projected to drive the market growth. 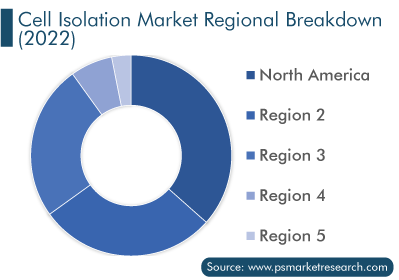 Also, in Canada there has been an increasing investment in research by the government and companies, which is projected to reinforce the market. In addition, the rising number of product approvals and presence of broad network of distribution channels of global players in Canada will boost the industry in the country.

Moreover, Europe was the second largest cell isolation market in 2022. It will showcase lucrative growth during the forecast period, owing to the presence of well-developed research infrastructure, availability of advanced products, and skilled professionals. Rising demand for progressive diagnostics and therapeutics products in Europe is another factor, which will support the growth of the industry. Furthermore, relatively less stringent product approval processes in this region are projected to boost the market growth.

In the U.K., there is an increasing focus on drug discovery and development and increasing government funding for new drug development. Cell isolation plays a vital role in the discovery and development of biologics. Thus, the demand for these products will rise in the near future. In addition, escalating demand for personalized medicine in the country will support the industry development. Personalized medicine is a medical therapy in which the treatment is customized for an individual based on the genetic or molecular analysis of the patient. Cell separation techniques can be used in personalized medicine for early detection of disease, selection of appropriate treatment, and determining the prognosis of the therapy.

This fully customizable report gives a detailed analysis of the market from 2017 to 2030, based on all the relevant segments and geographies.

Based on Cell Type

Frequently Asked Questions About This Report
What is the total size of the cell isolation market in 2022?+

What are the key driving factors for the growth of the cell isolation market?+

Which technique was the most used in the cell isolation industry?+

Which region largest user of consumables in cell isolation industry?+

North America made the greatest use of consumables in cell isolation industry.

What is the major trend observed in the cell isolation market?+

Inclination toward personalized medicine is trending in cell isolation market.