Breast Biopsy Devices Market to Generate Revenue Worth $1,426.2 Million by 2023

The study of circulating tumor deoxyribonucleic acid (ctDNA) or liquid biopsy, which is a low-risk and non-invasive process, is used not only to analyze the genetic profile associated with cancer, but also for keeping a record of the therapeutic responses exhibited by patients over a period of time and help detect cancer tumors. As cancer cells proliferate and die, some of the DNA is released in the circulatory system, thereby making it easier for doctors to detect the disease, which is why liquid biopsy is a growing breast biopsy devices market trend. Various medical centers are adopting this technique to diagnose breast cancer, due to the fact that it assists in detecting the disease in the early stages. In December 2017, Oncocyte Corporation presented data from its study, conducted using its breast cancer diagnostic test, at the 2017 San Antonio Breast Cancer Symposium (SABCS). The data revealed that this test allows for the non-invasive and sensitive detection of breast cancer in BI-RADS category 4 patients.

Breast imaging equipment has witnessed considerable technological advancements over the years. With the development of modern technology, the emergence of novel breast biopsy devices has been witnessed. These novel technologies include excisional breast biopsy, mammography- and ultrasound-guided biopsy, fine-needle aspiration biopsy, and core-needle biopsy. The development of the 3D mammography-guided biopsy technology has brought innovation to diagnosis of breast cancer, as 3D mammography produces more-accurate images, which is important for the early detection of cancer, and it also decreases the rate of false-positive results. Hence, these novel devices and technology have sparked the growth of the breast biopsy devices market. 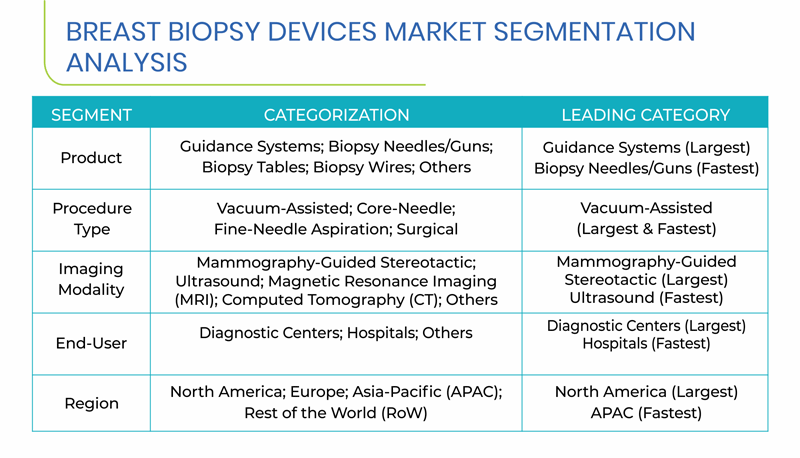 North America and Europe together accounted for 78.7% of the global breast biopsy devices market, in 2017. The use of these devices in the U.S. is quite high, largely due to the growing aging population, increasing prevalence of breast cancer, rapid economic growth, high healthcare expenditure, and expanding private healthcare sector. In addition, pharmaceutical and biotechnology firms, federal agencies, research institutions, public health associations, professional societies, and state and local governments are increasingly investing in the country’s medical and health-related research and development programs, which is expected to further lead the North American market to a bright future.

Similarly, growth of the European breast biopsy devices market is mainly driven by the growing geriatric population and increasing prevalence of breast cancer. According to Eurostat, the share of the population aged 65 years and above is increasing in every European Union (EU) member state, European Free Trade Association (EFTA) countries, and candidate countries. The share of people, aged 80 years and above, in EU-28’s population is projected to more than double between 2016 and 2080, from 5.4% to 12.7%.

The APAC region is projected to witness the fastest growth during the forecast period, primarily led by the increasing incidence of breast cancer, rising geriatric population, increasing healthcare expenditure and per capita income, rising awareness about breast cancer, and increasing research in breast biopsy devices.

In recent years, the aforementioned breast biopsy devices market players have taken several strategic measures, including obtaining the CE Mark approval, to gain a competitive edge in the market. For instance, in January 2018, Hologic Inc. obtained the CE Mark, in Europe, for the Brevera breast biopsy system with the CorLumina imaging technology, a real-time breast biopsy and verification system that improves the patient experience and streamlines the biopsy process from start to finish.

Similarly, in April 2016, Planmed Oy received the CE approval for the Planmed Clarity 3D digital breast tomosynthesis system and Planmed Clarity 2D full-field digital mammography system, both of which were made available for sale in the EU and other countries, where the CE Mark is legal. The Planmed Clarity systems provide improved image quality and enable a fast and reliable workflow in all situations, from screening to diagnostic imaging and biopsy procedures.