The market in the Asia-Pacific (APAC) region is predicted to witness the fastest growth, at a CAGR of 12.6% during the forecast period. This is mainly attributable to the expanding patient base and increasing research on breast biopsy devices in the region. 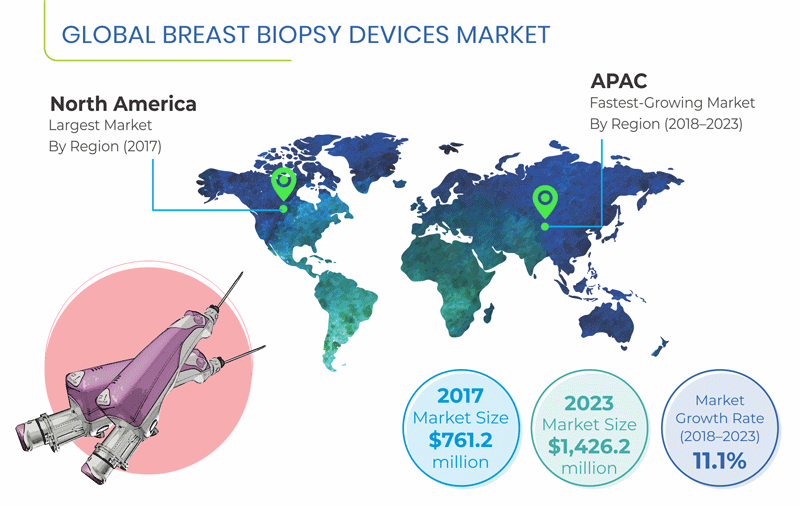 The advent of the liquid biopsy technique for investigating breast cancer is trending in the breast biopsy devices market. Liquid biopsy or the analysis of circulating tumor deoxyribonucleic acid (ctDNA) is a non-invasive and low-risk process, used to study the genetic profile associated with cancer and track the therapeutic response of patients, over time, as well as detect cancer tumors. The DNA is released, as the cancer cells proliferate and die, and some of it make their way into the circulatory system, making cancer easy to diagnose. As this technique is useful in detecting the presence of early-stage cancer, various medical facilities are adopting it in diagnosis.

Breast cancer, which is the most common cancer among women, worldwide, is caused by uncontrolled cell growth, which usually leads to a tumor that is felt as a lump. According to the statistics of the National Cancer Institute (NCI), more than 3 million women were living with breast cancer in the U.S., in 2014. Furthermore, in 2012, Belgium reported the highest rate of breast cancer, as per the World Cancer Research Fund International (WCRF). Additionally, a greater number of cases were diagnosed in developing and under-developed countries, making up approximately 53% of the cases, globally. These statistics indicate the high incidence of breast cancer worldwide, which is the most crucial factor boosting the growth of the breast biopsy devices market. 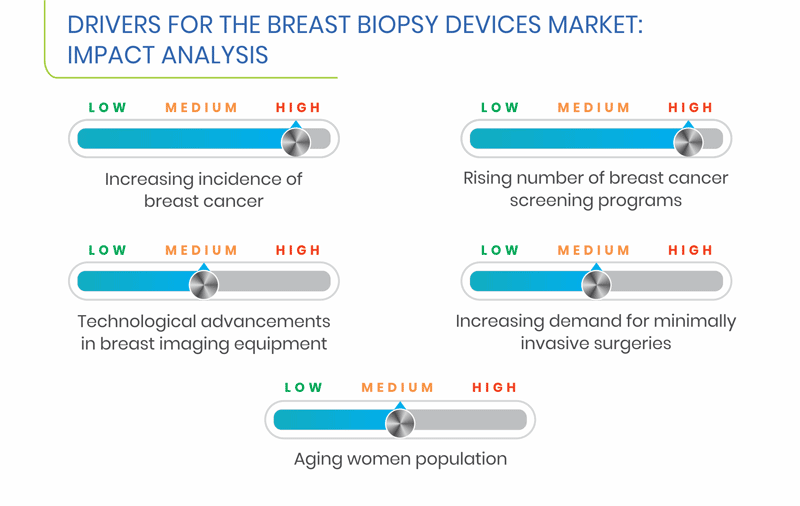 Developing countries face significant problems due to an increase in the cancer incidence and geriatric population. Currently, traditional biopsy technologies, such as core-needle biopsies and surgical biopsies, dominate the disease diagnosis market in Asian countries. According to statistics by GLOBOCAN, over the past few years, breast cancer has been the most commonly occurring cancer in women, across the globe, with slightly more cases in developing nations. Moreover, breast cancer has been ranked as the fifth leading cause of death globally. Medical firms have now shifted their focus on combining the imaging technology with breast biopsy procedures to improve efficiency and reduce surgical costs. Moreover, the growing awareness regarding breast biopsy procedures is helping tap the diagnostics space in emerging economies, thereby providing opportunities to the players to invest in these regional breast biopsy devices markets.

Biopsy needles or guns would observe the fastest growth, witnessing a CAGR of 12.1%, during the forecast period, and is further anticipated to outgrow the largest category of historical period, i.e. guidance systems, and hence becoming the largest segment in breast biopsy devices market, by the end of forecast period.

The vacuum-assisted biopsy category held the largest share in the breast biopsy devices market, in 2017, based on procedure type. The major factor driving the adoption of these devices is that they can precisely locate the area of abnormality, so that only samples from the region of interest are taken.

Ultrasound-guided biopsy is expected to witness the fastest growth, based on imaging modality, during the forecast period, owing to the fact that it is a faster technique, which also reduces the need for ionizing radiation exposure, contrary to the standard mammography-guided stereotactic biopsy procedure.

In 2017, diagnostic centers were the leading end user in the breast biopsy devices market, attributed to the growing healthcare industry and increasing R&D expenditure.

Globally, North America held the largest share in the breast biopsy devices market in 2017. The usage of breast biopsy devices is significantly high in the U.S. because of the rising incidence of breast cancer, growing aging population, high healthcare expenditure, economic prosperity, and expanding private healthcare sector. Furthermore, federal-, state-, and local-government agencies, voluntary healthcare associations, pharmaceutical and biotechnology companies, professional societies, and research institutions in the U.S. are investing heavily in various medical and health-related research and development activities, which further aids the growth of the market in the country. 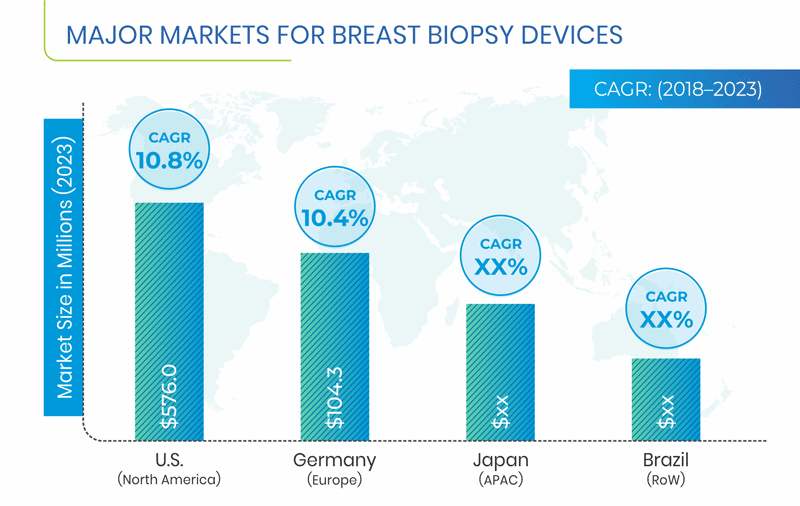 In recent years, the major players operating in the global breast biopsy devices market have taken several strategic measures, including acquisitions and product launches. For instance, in December 2017, Becton, Dickinson and Company (BD), acquired C. R. Bard Inc. for $16.0 billion. The combined company is expected to work toward improving the treatment of the disease and offering healthcare providers more convenience. In addition, C.R. Bard’s strong product portfolio and innovation pipeline will increase BD's opportunities in fast-growing clinical areas and enhance the growth opportunities for the combined company in non-U.S. markets.

Based on Procedure Type

Based on Imaging Modality