Automotive Refinish Coatings Market to Generate Revenue Worth $11,099.7 Million by 2023

Recreational vehicles (RV) generally refer to motor vehicles and trailers which can be equipped with basic home amenities and converted to a living space. The increase in the demand for RVs has been witnessed mainly from different locales of North America and Europe, owing to the high disposable income and demand for customization. For instance, in October 2016, the shipment of RVs across the globe was estimated to be 33,398 units, as compared to the 28,346 units in 2015. With the increasing demand for RVs, manufacturers are focusing on modifications, to provide customized and economically viable RVs to the customers. Thus, the increasing trend of customization and modification of RVs is expected to drive the automotive refinish coatings market during the forecast period. 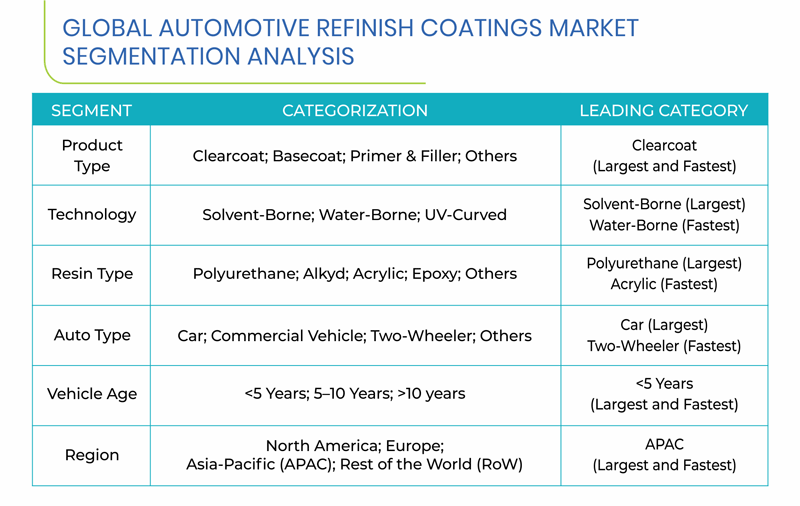 Clearcoats are projected to witness the fastest revenue growth in the automotive refinish coatings market, among all product types, during the forecast period. This can be attributed to the fact that they protect basecoats and give vehicles a shiny look. This final coat provides durability, protection against environmental factors, and scratch resistance to the overall coating.

Solvent-borne was the largest revenue-generating category, by technology, in 2016. This can be attributed to benefits such as durability, flexibility to be used with other solvents , high gloss, and distinctness of image (DOI) that are essential in the vehicle refinishing process.

The two-wheeler category is projected to witness the fastest revenue growth in the forecast period, on the basis of auto type. This can be ascribed to the increasing demand for both new and used two-wheeler vehicles.

Vehicles aged less than 5 years generated the highest revenue in the automotive refinish coatings market in 2016. This can be attributed to customers tendency to refinish any damage to a new automobile, to keep its aesthetic appearance intact.

APAC and Europe are expected to account for over 60.0% share in the automotive refinish coatings market by 2023. This can be mainly attributed to the growing gross domestic product (GDP) and per capita income, with which the sales of vehicles, including RVs and used vehicles, have witnessed a huge growth.

North America and RoW also hold considerable shares in the market, on account of the rise in the number of collisions and growth in the sales of RVs.

The U.S. is expected to lead the North American automotive refinish coatings market during the forecast period, generating revenue of over $2,040.7 million in 2023. The major factors driving the market for refinish coatings in the U.S. are the increasing average age of vehicles, rising number of RVs, and surging instance of collisions.

In May 2017, Axalta Coating Systems entered into a new two-year alliance, as a Gold Partner, with WorldSkills Australia, a non-profit organization. The company will support both the regional and national competitions, through the supply of Axalta’s Standoblue refinish products and the new generation of Sagola spray guns. In return, WordSkills will offer Axalta support and resources, such as exposure to the latest work practices and sustainable techniques, product training, teamwork development, problem solving strategies, and leadership skills.