Due to the rising demand for autonomous vehicles, the incorporation of advanced driver-assistance systems (ADAS) is increasing. Additionally, several policies are being implemented and financial incentives are being offered by governments for the integration of radars. Both these factors are expected to together drive the global automotive radar market at an 8.4% CAGR during 2020–2030 (forecast period); the market generated $5,839.0 million revenue in 2019. 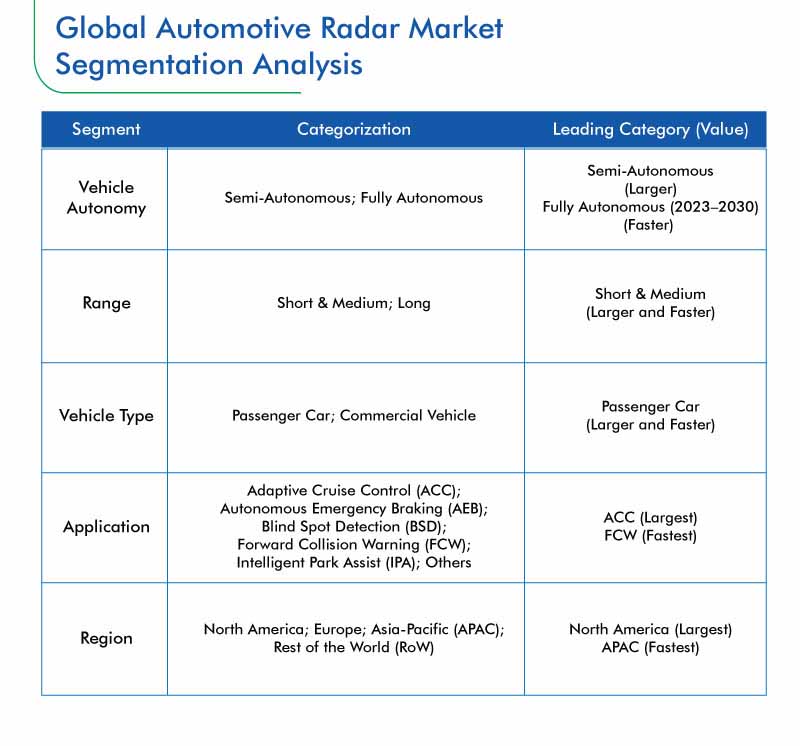 During the 2023–2030 period, the fully autonomous bifurcation is predicted to grow faster in the automotive radar market, on account of the wide deployment of such automobiles in shared mobility services, especially those offered via robotaxis. This is why, during this period, the procurement rate of fully autonomous vehicles would be higher than semi-autonomous variants; therefore, the integration rate of radars will also be higher in the former type of automobiles.

Till 2030, the highest CAGR in the automotive radar market would be seen in Asia-Pacific (APAC). This is attributed to the high production of vehicles and continuous advancements in their technology, especially in China. Further, with the increasing investments for the development of enhanced vehicle safety features and rising disposable income in developing countries, such as India and China, the sale of premium automobiles is surging, thereby driving the demand for radars in the region.

Players in the automotive radar market are launching an array of improved products, to target a wider customer pool and augment their profit.

For instance, in February 2020, a new 77 gigahertz (GHz) radar technology was launched by HELLA Automotive Sales Inc., to enable autonomous driving. While, initially, these radars will be produced in Hamm, Germany, later, the production will also start at the firm’s manufacturing plants in the U.S. and China.