During the forecast period, the automotive LiDAR market is expected to witness faster growth in the fully-autonomous category, owing to the greater estimated deployment of such automobiles in the public shared mobility services.

Inflow of Investments is a Major Trend in the Market

The automotive LiDAR market is witnessing the inflow of substantial investments from major firms. Over the last three years, the market has successfully gathered over $1 billion investments, distributed across over 70 startups, worldwide. For instance, in December 2019, Volkswagen AG’s subsidiary, Porsche Automobil Holding SE, invested a hefty undisclosed amount in a LiDAR startup company, Aeva Inc. Further, in March 2019, an Israel-based startup, Innoviz Technologies Ltd., received an investment of $132 million from several major Chinese financial institutions, as part of its Series C funding round.

The superior detection capacity of LiDAR sensors, compared to other sensors, is a major driver contributing to the growth of the automotive LiDAR market. The LiDAR sensor technology is an airborne technology that allows for faster and more accurate data collection than other available advanced driver-assistance system (ADAS) sensors. Moreover, other additional features of LiDAR, including higher sample density, day and night usage ability, the capacity to be integrated with other data sources, and minimum human dependency, make it a superior sensor technology for vehicles, thereby making it the preferred choice for adoption. 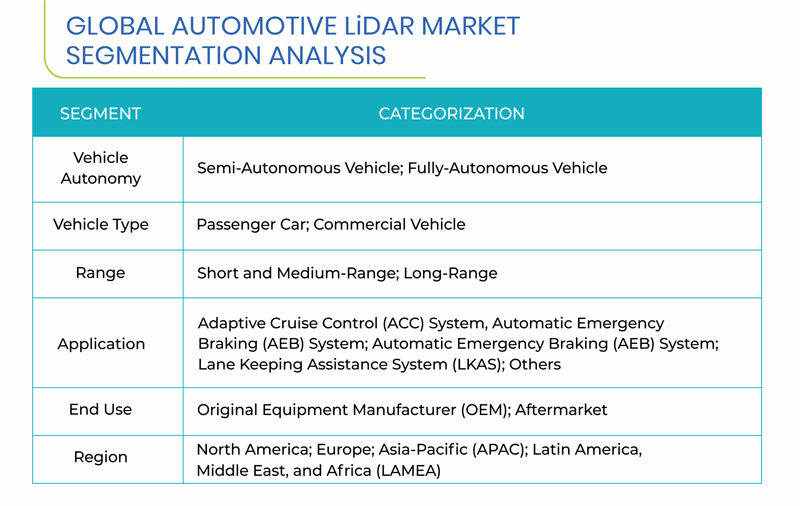 APAC is expected to be the fastest growing region in the automotive LiDAR market during the forecast period, driven by the increasing development of autonomous technologies in this region. The autonomous technology is a trend in the transportation sector, and self-driving vehicles are already on APAC’s streets today, with tests and pilot projects being rolled out in China. For instance, in August 2019, Beijing Xiaoju Technology Co. Ltd. (DiDi Chuxing) launched a pilot project for testing robo-taxis, in Shanghai. As a part of the project the company will deploy 30 different models of level 4 autonomous cars.

Some of the key strategic measures taken by the major players in the automotive LiDAR market are Sony Corp.’s January 2020 announcement that it is looking forward to developing LiDAR sensors, in the coming years, for autonomous vehicles. Similarly, in December 2019, Yandex N.V. announced that it has begun to test its own LiDAR laser technology and cameras. The sensors used in these devices, which would be used in the company’s delivery robot, the Yandex.Rover, would be able to detect whether an object is a pedestrian, bicycle, or something else, at a distance of up to 200 meters.