The rod lift category is expected to witness the fastest growth in the market during the forecast period. This can be mainly attributed to the ability of such lifts to pump high-temperature and viscous oils in slim holes and in complex location.

One of the key factors driving the artificial lift market is the increasing number of mature oil and gas fields. Mature fields, over time, lose their natural reservoir pressure, which plays a vital role in oil extraction. On account of this, companies use artificial lifting techniques for an enhanced recovery of oil from mature wells. 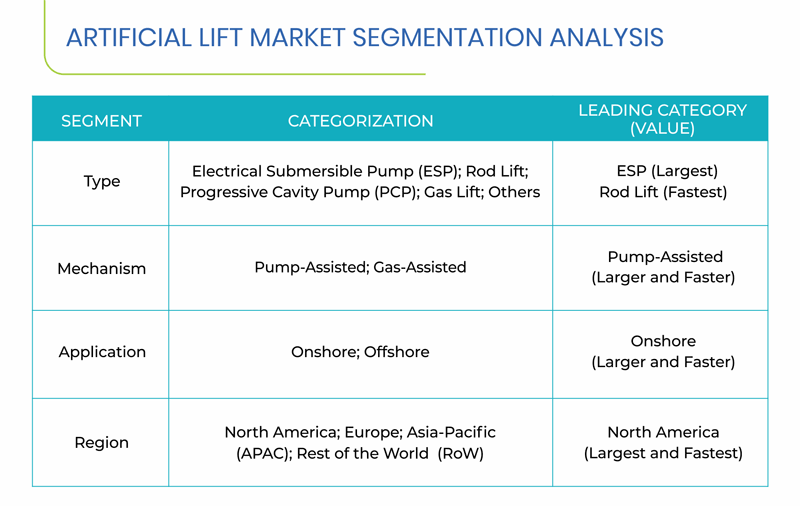 In 2017, ESP category held the largest revenue share in the artificial lift market, based on type, owing to the sustained performance and high oil extraction volume of such devices, over the other types.

During the forecast period, the pump-assisted category is projected to witness the faster revenue growth in the market, on the basis of mechanism. This can be ascribed to the ability of such pumps to increase the bottom-hole pressure of the tube string, in order to lift large amounts of fluids to the surface.

The onshore category accounted for the larger revenue share in the artificial lift market in 2017, based on application. This can be ascribed to the presence of the majority of the mature wells in onshore oil fields. Additionally, onshore oil drilling is cost-effective compared to offshore drilling, which is why the preference for the former is higher.

Together, North America and Europe are expected to account for over 70.0% revenue in the global artificial lift market by 2023. This can be mainly attributed to the presence of established market players and shift of focus toward unconventional sources of crude oil and natural gas, which require artificial lifts.

APAC and Rest of the World (RoW) are also expected to hold considerable shares in the artificial lift market, on account of the technological advancements in artificial lift systems, growing interest of E&P companies in these regions, and rising shale gas production.

China is expected to lead the APAC artificial lift market during the forecast period, generating revenue of over $729.4 million. which can be mainly attributed to the increasing deep and ultra-deep offshore oil production activities in the country.