Among all regions, North America is expected to witness the fastest revenue growth during the forecast period. This can be mainly attributed to the increasing preference toward unconventional ways of producing oil and gas, over conventional ways, owing to the decline in the natural pressure of mature fields. In U.S. more than 90% of oil wells require artificial lifts at some point of time, and 90% of the existing wells currently use an artificial lift system. 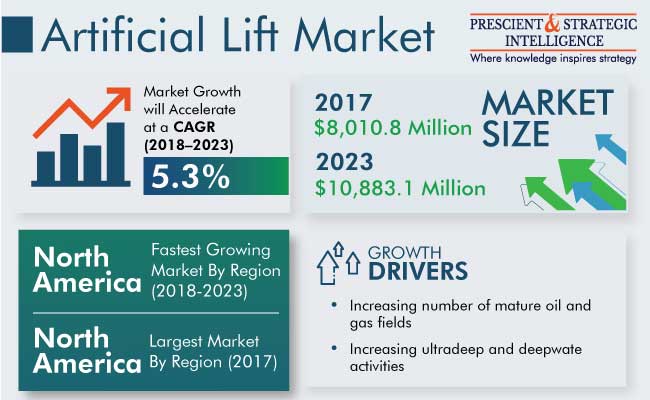 The increasing number of mature oil and gas fields is one of the most prominent factors driving the artificial lift market. Over 70% of the produced oil comes from mature fields that are more than 30 years old, and over time, the reservoir pressure of these mature fields declines. As a result, E&P companies prefer to use artificial lifting techniques in mature wells, for enhanced recovery of oil, to maximize their revenue.

The availability of recoverable shale gas in various parts of the world is expected to create ample opportunities for the players operating in the artificial lift market. Artificial lifting methods are used in horizontal shale gas-producing wells, to lift the accumulated fluids in the well and help in sustaining good performance of the well.

The electrical submersible pumps (ESP) category accounted for the largest revenue share in the artificial lift market, on the basis of type, in 2017. This can be ascribed to the tightly contained unit of such devices that keeps the liquid out of the housing and internal components and ensures that the pumps don’t leak or short circuit when submerged; such systems use direct pressure through the pipe, to get the fluid out. This method is more effective than the suction method, because it is able to extract the oil from deeper in the ground.

The pump-assisted category is expected to witness faster growth in the artificial lift market, in terms of value, during the forecast period, with a 5.5% CAGR, on the basis of mechanism. The pump-assisted mechanism is more commonly used over the gas-assisted mechanism, as it increases the bottom-hole pressure of the tube string, in order to lift a sufficient amount of fluid to the surface.

Globally, North America accounted for the largest revenue share in the artificial lift market, during the historical period(2013–2017), and it is expected to maintain the trend during the forecast period, mainly as a result of the presence of established players. Further, more than 90% of oil wells require artificial lifts, in the U.S., owing to the decline in their natural pressure, over time. Considering the future industry scenario, the U.S. is expected to lead the North American market, generating revenue worth $3,771.0 million in 2023. 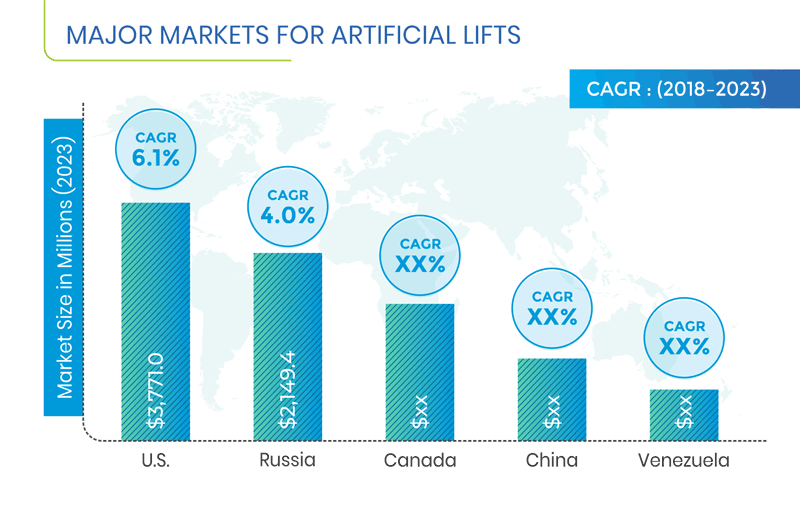 In recent years, the players in the global artificial lift market have taken several strategic measures, such as product launches and geographical expansions by acquisition, in order to gain a competitive edge in the industry. For instance, in February 2018, Weatherford International PLC launched a new software for its ForeSite production optimization platform. This platform optimizes the support for reciprocating rod-lift systems, by adding support for gas-lift and ESP systems.

Moreover, in July 2017, Halliburton Company acquired Summit ESP, a supplier of ESP technology and services. With this acquisition, the former company aims to expand globally with its artificial lift portfolio.