Artificial Disc Market to Generate Revenue Worth $3.4 Billion by 2024

The cervical category held the larger share in 2017 in the artificial disc market. Further, this category is expected to witness faster growth during the forecast period, owing to the increasing cases of cervical related diseases, globally.

Rising number of mergers & acquisitions among the players as a strategic activity to expand their product portfolios and global presence is the key trend observed in artificial disc market. For instance, in September 2017, NuVasive Inc. acquired Vertera Spine. The acquisition by NuVasive Inc. is a strategic decision aimed at furthering company’s commitment to pursue strategic opportunities as it builds out its advanced materials science portfolio.

Surge in Geriatric Population to Drive the Artificial Disc Market

Globally, the elderly population is increasing. According to a report published by the United Nations Department of Economic and Social Affairs (UNDESA) entitled, World Population Ageing 2015, the population of the people aged 60 years or above is growing at a high rate. Moreover, the number of people aged 60 years or over is projected to grow by 56.0% globally, that is, from 901 million in 2015 to 1.4 billion by 2030. As the elderly population is more prone to developing degenerative disc disease, the demand for artificial disc is expected to increase in the coming years. 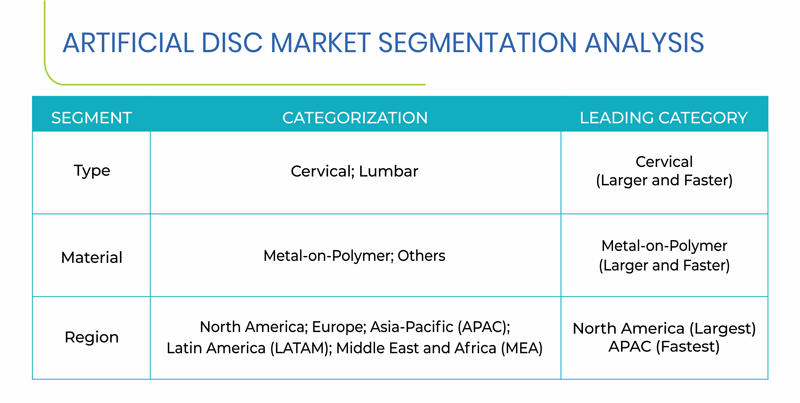 North America accounted for the largest share in the artificial disc market in 2017, followed by Europe. Together, North America and Europe are expected to hold over 80% share in the market in 2024. This can be mainly attributed to the presence of established players, growing geriatric population, and rise in number of surgical procedures in both regions.

The players are taking several strategic activities to expand their product portfolio and expand their consumer base. For instance, in April 2017, NuVasive Inc. launched a new Reline Trauma portfolio as the company’s foundation to capture the growing potential in the U.S. spine trauma fixation market.