Among all regions, Asia-Pacific (APAC) is expected to witness the fastest growth in the market, during the forecast period. This can be mainly ascribed to the growing geriatric population, rising healthcare expenditure, and increasing investments by public and private organizations in the healthcare sector to cater to unmet medical needs of the people in the region. According to the United Nations Department of Economic and Social Affairs (UNDESA) report entitled World Population Ageing 2015, in Japan, 23.3% of the population was aged 60 years and above in 2000, and it is estimated to reach 37.3% by 2030. As the elderly population is more susceptible to develop lumbar- and cervical-related diseases, the artificial disc market is projected to increase in the region. 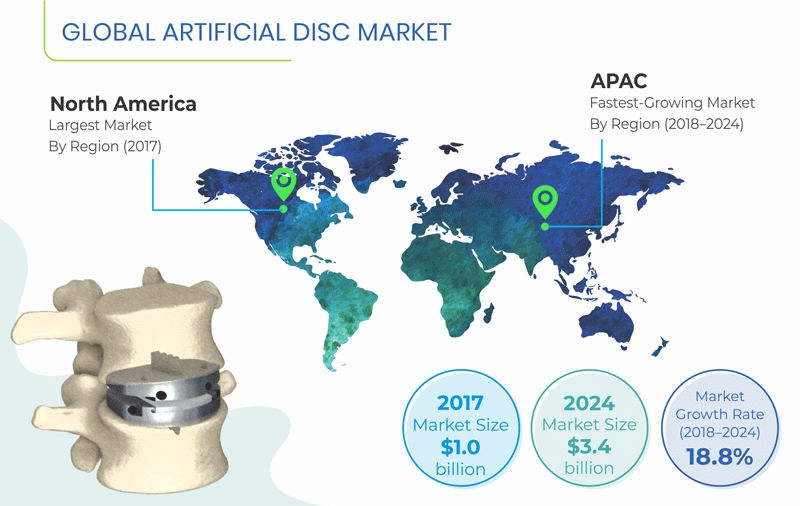 The key trend observed in the artificial disc market is the increasing number of mergers and acquisitions among the key players to expand their geographical footprint and consumer base. For instance, in July 2016, Zimmer Biomet Holdings Inc. acquired LDR Holding Corporation (LDR), a medical device company dedicated to designing and commercializing surgical technologies for the treatment of patients suffering from spine disorders. The acquisition aimed at strengthening the position of Zimmer Biomet Holdings Inc. in musculoskeletal healthcare with the addition of a premier spine platform to its product portfolio.

Long-term cost benefits of disc replacement over spinal fusion procedures is a key factor driving the growth of the artificial disc market, globally. Spinal fusion requires various surgeries over a span of time, whereas artificial disc replacement is a one-time surgical procedure. According to a study published in the North American Spine Society (NASS) meeting in 2013 by researchers of the Rothman Institute and the Texas Back Institute, the total costs for average of 48 months were lower in the patients receiving cervical arthroplasty (artificial disc replacement), around $34,000, as against $39,000 in the patients receiving anterior cervical discectomy and fusion (ACDF). 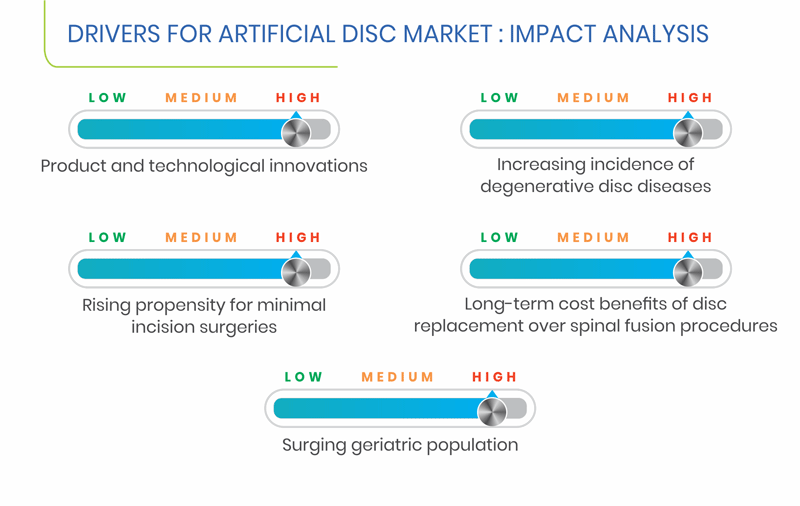 An increasing number of clinical studies on artificial discs over ACDF surgeries have been observed, globally. For instance, in November 2016, Spineart SA in its clinical data for Baguera C cervical disc prosthesis concluded that cervical disc replacement with Baguera C is a safe and effective procedure for the treatment of radiculopathy due to soft disc herniation or moderate uncarthrosis on one or two levels. Since the studies have shown promising results with the use of these discs, the opportunities for the key players have significantly increased in the artificial disc market to receive regulatory approvals for the commercialization of these products.

The artificial disc market when segmented on the basis of type was dominated by the cervical category, in 2017. The market growth in this category is attributed to the rising prevalence of cervical-related health issues, globally.

The metal-on-polymer material category is expected to be the faster growing category during the forecast period. The popularity of this material can be ascribed to its shock absorption feature.

North America is expected to hold the largest share in the global artificial disc market in 2024. This can be mainly attributed to surging geriatric population, rising healthcare expenditure, improving economy, expanding private healthcare sector, and growing awareness among the patients about the availability of various treatment options. Further, considering the market dynamics, the U.S. is expected to dominate the North American market.

The APAC region is expected to be fastest growing region for artificial disc market, mainly on account of rising healthcare expenditure, increasing per capita income, coupled with surge in geriatric population. Moreover, Japan is projected to account for the largest market share in the APAC region. 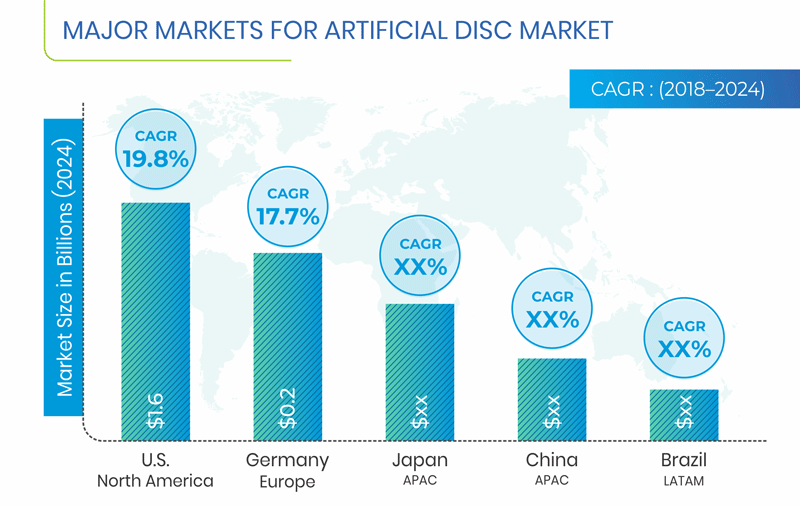 In the recent years, major players in the artificial disc market have taken strategic measure of product approvals and launches, partnerships, and acquisitions to gain a significant share. For instance, in January 2018, NuVasive Inc. acquired SafePassage, an intraoperative neurophysiological monitoring (IONM) service provider, with the aim to strengthen company’s IONM business line.