Agricultural Micronutrients Market to Generate Revenue Worth $9,009.2 Million by 2023

The industry is expected to exhibit the fastest growth in the category of molybdenum in the forecast period. This can be ascribed to its ability to convert nitrate into nitrite and then into ammonia, before being used to synthesize amino acids, which is crucial for plant growth.

In recent times, the production of high-value crops, such as fruits, nuts, and vegetables, has increased. Such crops require greater quantities of micronutrients, in every hectare, than others. The introduction of micronutrients in the conventional methods of farming, practiced for horticulture, has been identified as a major trend in the agricultural micronutrients market. For instance, Food and Agriculture Organization, a United Nations agency, estimates that the global production of fruits and vegetables was 1,941.1 million tons in 2016, a 15.9% increase from 1,674.1 million tons in 2010.

According to the Population Division of the United Nations Department of Economic and Social Affairs (UNDESA), the global population is expected to reach nearly 9.8 billion by 2050, growing by 30.9% between 2017 and 2050. This will lead to a rising demand for food in the coming years, and to meet it, optimum utilization of the existing farmlands, to maximize the yield, is necessary, which can be achieved by the increase in the use of agricultural micronutrients. Thus, the population boom, which would result in the rising demand for food, is an important agricultural micronutrients market growth driver. 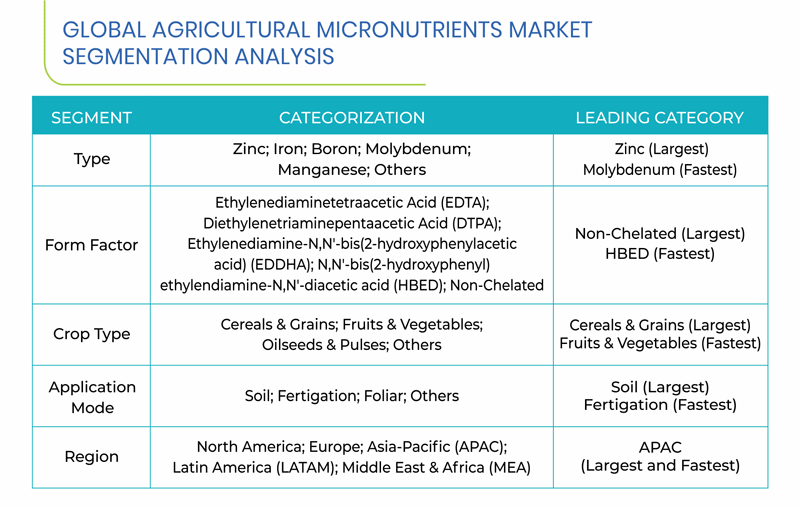 Zinc was the largest category, by type, during the historical period, in terms of value, mainly on account of the high demand for zinc, as it promotes plant growth, improves disease control, and increases the yield of agronomic crops.

The fruits and vegetables category is expected to exhibit the fastest growth over the forecast period, in terms of value. The consumption of fruits and vegetables is increasing, owing to the growing global population, thereby driving the market, as micronutrients are widely used for their optimum growth.

The fertigation category would exhibit the fastest revenue growth in the agricultural micronutrients market, during the forecast period. The fertigation process reduces the risk of soil-borne diseases to the roots, decreases the erosion rate of the soil, lowers the requirement for water, helps plants absorb the nutrients better, and checks the release rate of fertilizers.

APAC and North America are expected to account for over 70.0% share in the agricultural micronutrients market by 2023. This can be mainly attributed to the presence of established players, high degree of product differentiation, product knowledge among local consumers, and high adoption rate.

During the forecast period, Germany is expected to lead the European market, generating revenue of over $390.5 million in 2023.

Argentina would be the fastest-growing market for agricultural micronutrients in the LATAM region. The growing population and adoption of modern farming techniques involving micronutrients, to improve the crop yield, are the major factors contributing to the growth of the market in the country.

The agricultural micronutrients market is highly fragmented in nature, and FMC Corporation, Akzo Nobel N.V., BASF SE, and SAPEC SA are some of the major players engaged in the production and sale of such products.

In November 2017, Akzo Nobel N.V. initiated the expansion work at its Kvarntorp plant, in Sweden, for chelated micronutrients. The expansion works, which require investments of $11.2 million, would be completed by the end of 2018. The expanded facility will produce high-quality iron chelates, which, in turn, will strengthen the company’s capability to meet the growing demand for agricultural micronutrients in Europe.

Some other important players operating in the agricultural micronutrients market are The Mosaic Company, Yara International ASA, Coromandel International Limited, and Chambal Fertilisers and Chemicals Limited.