Aerospace Composites Market to Generate Revenue Worth $4,234.4 Million by 2023

The global aerospace composites market was valued at $2,376.7 million in 2017 and is projected to reach $4,234.4 million by 2023, progressing at a CAGR of 10.1% during the forecast period (2018–2023). Among various types of aerospace composites, carbon fiber held the largest revenue share in the market during the historical period.

Besides, the carbon fiber category is expected to witness the fastest growth in the market during the forecast period. This can be mainly attributed to the increasing demand for carbon fiber composites in the military and commercial aerospace sectors.

The major trend observed in the aerospace composites market is the increasing adoption of the OOA technology over the autoclave process for the manufacturing of aircraft composite materials. In the OOA process, composites are manufactured without autoclaves in a closed mold via pressurizing and heating techniques. The process reduces the processing time and energy, thereby decreasing the overall production cost.

Growing demand for carbon fiber composites in aircraft manufacturing is a major factor driving the aerospace composites market, globally. Carbon fiber composites are lightweight in nature and offer high stiffness and, therefore, are considered ideal for reducing the weight of aircraft. With the reduction in weight, the fuel efficiency of the aircraft improves, which, in turn, serves as a major cost-reducing factor in terms of operations. Moreover, with the increasing passenger footfall in terms of air travel for both leisure and business purposes, countries across the world are focusing on expanding their aircraft fleet. This, in turn, is creating a huge demand for passenger aircraft, thereby driving the market for carbon fiber composites. 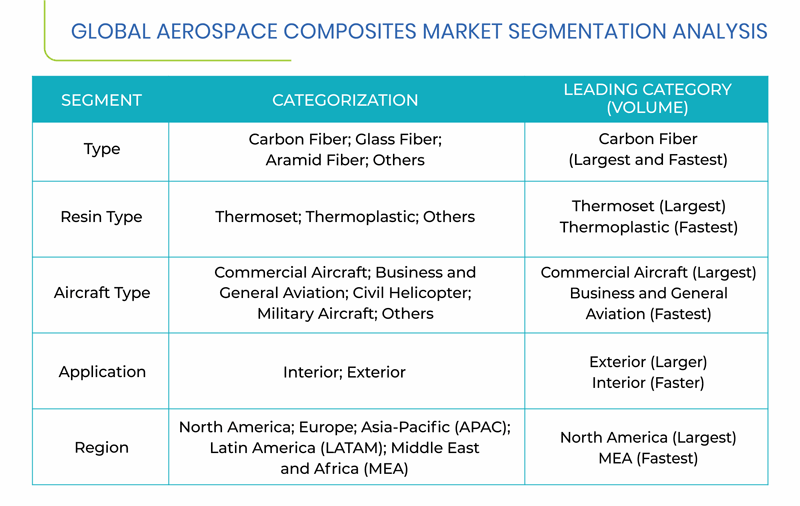 In 2017, the carbon fiber category held the largest volumetric share in the market and is also expected to witness the fastest growth during the forecast period. This can be mainly attributed to the high demand for these composites globally, owing to their properties such as high chemical resistance and low thermal expansion, which encourage their adoption in the industry.

During 2018–2023, the thermoplastic category is projected to witness the fastest volumetric growth in the market. This can be ascribed to the ability of thermoplastic composites to withstand high mechanical loads. As a result, these are preferred for the production of large structural components of aircraft.

The interior application category is projected to witness faster market growth in terms of volume during the forecast period. This can be attributed to the high-volume consumption of composite materials for the manufacturing of interior parts of aircraft, including galleys, seat frames, cabin components, lavatories, floor boards, wall and ceiling panels, and stowage bins.

Together, North America and Europe are expected to account for over 70% revenue in the global market in 2023. This can be mainly attributed to the presence of established market players and original equipment manufacturers (OEMs) in the region and their increasing focus on reducing the overall weight of aircraft.

APAC and LATAM are also expected to hold considerable shares in the market, on account of the increasing demand for commercial aircraft in view of the growing air passenger traffic in countries such as China, India, and Brazil.

China is expected to lead the APAC aerospace composites market, with the revenue generation of $268.3 million in 2023. This can be mainly attributed to the increase in demand for aircraft in the country’s defense sector. Brazil held the largest share in the market in the LATAM region, owing to the presence of companies such as Embraer S.A. and Aerotron Indústria e Comércio LTDA, which have a strong manufacturing base for aircraft and allied components.

The U.A.E. is expected to hold the largest revenue share in the MEA market during the forecast period. This can be mainly attributed to the country’s increasing focus on and investments in non-oil industries as part of its efforts toward economic diversification.

In March 2018, Toray Industries Inc. announced that it reached an agreement with Koninklijke Ten Cate BV on the acquisition of TenCate Advanced Composites. With this acquisition, the company aimed at strengthening its portfolio of high-performance aerospace composites.