The market, during this period, is expected to witness the fastest growth in the MEA region. This can be mainly ascribed to the increasing focus of countries in the region, including Saudi Arabia and the U.A.E., on non-oil industries, such as aircraft manufacturing, as part of their efforts toward economic diversification. In view of this, Solvay SA and Mubadala Investment Company, in 2016, formed a joint venture to manufacture lightweight prepreg composite materials for aircraft components. Thus, the growing focus of regional countries on the manufacturing sector is expected to propel the demand for aerospace composites in the region in the near future. 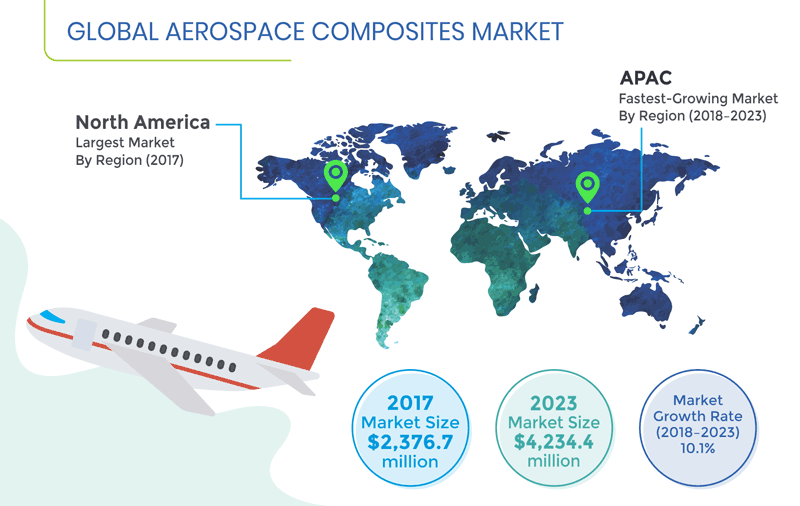 The key trend observed in the aerospace composites market is the growing preference for the out-of-autoclave (OOA) process over the autoclave process for the manufacturing of composite materials. The autoclave process involves the use of pressure vessels to carry out the production of composite materials; the process is not only time-consuming but also expensive. This increases the overall cost of the product so produced. On the other hand, in the OOA process, composites are manufactured in a closed mold without the use of autoclaves, which lowers the production cost and improves the material strength.

One of the major factors driving the aerospace composites market is the large-scale demand and adoption of carbon fiber composites for aircraft manufacturing. Aircraft manufacturers are increasingly focusing on the use of lightweight, high-performance structural materials to improve the fuel economy of their aircraft and lower their operational cost. Carbon fiber composites demonstrate properties such as low weight, high stiffness, and high tensile strength, owing to which they are witnessing a high demand in the industry.

Developing nations such as China, India, and Indonesia hold immense potential for the growth of the players operating in the aerospace composites market, as the countries are witnessing growth in their manufacturing sector on account of the rapid urbanization, increasing middle-class population, and rising disposable income. Moreover, with people increasingly opting for air travel, there has been a rise in air traffic and demand for commercial aircraft. This, in turn, is offering impetus to the demand for composites used in aircraft manufacturing. 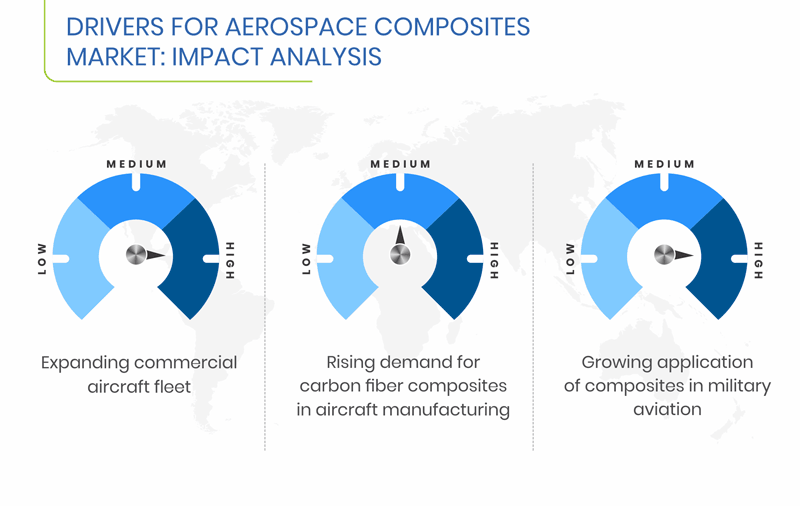 Carbon fiber composites, among all composite types, accounted for the largest volumetric share in the market in 2017. This can be mainly attributed to the high demand for carbon fiber composites owing to their high tensile strength, high chemical resistance, high temperature tolerance, low thermal expansion, and exceptional load-carrying capacity, as compared to other materials.

The thermoset category held the largest market share in terms of both volume and value in 2017, on the basis of resin type. The superior properties of thermoset resins, such as high mechanical strength, high corrosion resistance, and low weight, have supported their adoption for various aerospace applications. In addition, thermoset resins impart high stiffness and tensile strength to aircraft components, owing to which they are preferred in the aerospace sector.

The aerospace composites market, during the forecast period, is expected to witness the fastest growth in the civil helicopter category, registering 11.1% CAGR in terms of revenue. Civil helicopters are primarily used for short-distance travel and in emergencies for evacuation purposes and delivery of medical services. In order to be prepared for emergency conditions, the demand for such vehicles is projected to increase, particularly in developed nations, such as the U.S., Russia, Germany, and France.

Between the two application categories, the interior category is expected to witness faster growth in terms of value during the forecast period, with 10.7% CAGR. This can be attributed to the growing demand for composite materials for the manufacturing of interior parts of aircraft, such as seat frames, cabin components, lavatories, floor boards, wall and ceiling panels, and stowage bins.

Geographically, North America accounted for the largest volumetric share in the aerospace composites market in 2017. This can be mainly attributed to the presence of a large base in the region for the manufacturing of all types of aircraft. Besides, the region is a major exporter of commercial aircraft to the APAC, MEA, and European regions. Considering the future industry scenario, the U.S. is expected to lead the North American market, generating revenue worth $1,380.3 million by 2023.

During the forecast period, the market is expected to witness the fastest growth in MEA, primarily on account of the increasing investments for the manufacturing of aircraft and aerospace components. The U.A.E. is expected to account for the largest volumetric share in the regional market in 2023. 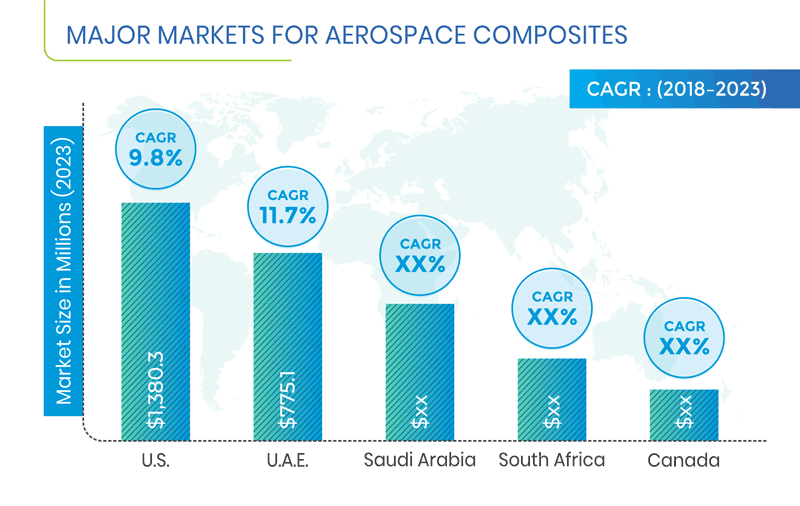 In recent years, major players in the market have taken several strategic measures to increase their market share. For instance, in December 2017, Hexcel Corporation acquired the aerospace and defense (A&D) business of Oxford Performance Materials, a developer of biomedical polymers, biomedical devices, and industrial parts. The acquisition of asset included intellectual property, equipment, and manufacturing process technology related to the company’s A&D operations in Connecticut, U.S.

Based on Resin Type