ADAS Sensor Market to Generate Revenue Worth $40.8 Billion by 2030

The global advanced driver-assistance systems (ADAS) sensor market generated revenue of $11.5 billion in 2019. The market is predicted to exhibit a CAGR of 11.7% during the forecast period (2020–2030), to register an expected revenue of $40.8 billion in 2030. Radar sensor was the largest category during the historical period (2014–2019), in terms of value, based on sensor type.

During the forecast period, the LiDAR sensor category is expected to witness the fastest growth in the ADAS sensor market, owing to the introduction of fully autonomous vehicles in the near future.

In the last few years, the automotive industry in different countries around the world has significantly increased its spending on R&D activities, thereby facilitating the development of advanced autonomous cars; this is a major trend being witnessed in the ADAS sensor market. For instance, in 2018, the U.S. government invested $100 million in R&D for the development of autonomous vehicles. In 2019, another funding of $60 million was granted by the U.S. government for a demonstration project that would test the safety and feasibility of autonomous vehicles.

As the autonomous vehicle technology continues to develop, the governments of different countries are implementing legislations to support the adoption of these vehicles, thereby driving the ADAS sensor market. Every year, the number of regulations being passed, with regard to autonomous vehicles, is gradually increasing. For instance, in 2017, 33 U.S. states introduced legislations regarding autonomous vehicles, while in 2018, 15 states enacted 18 autonomous vehicle-related bills. Also, in 2017, the Directorate General of Traffic (DGT), in Spain, collaborated with Mobileye NV, for the purpose of preparing Spain’s regulatory policy and infrastructure for autonomous cars. 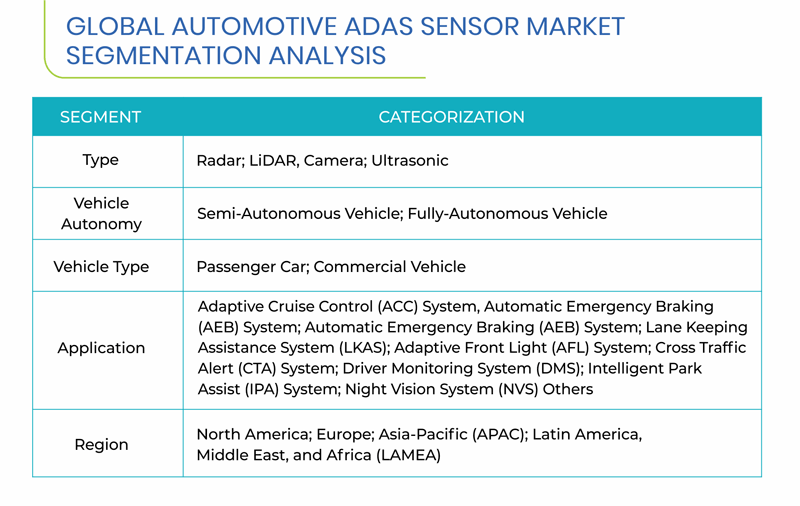 Europe was the largest market for ADAS sensors during the historical period. The fastest growth in the ADAS sensor market is expected to be witnessed in APAC, led by China, during the forecast period. The dominance of the country is buoyed by its high production capacity as well as its continuous implementation of automotive innovations in terms of autonomous vehicles.

Some of the key strategic measures being taken by the major players in the ADAS sensor market include, OmniVision Technologies Inc.’s September 2019 announcement about its partnership with Arm Ltd. to develop advance image sensors for vehicles. Under the partnership, OmniVision Technologies Inc. would combine its OX03A1Y image sensor with the Arm Ltd.’s Mal-C71 image signal processor (ISP) for offering a dual-mode automotive camera module. Further, in December 2019, Yandex NV announced that it has begun to test its own LiDAR laser technology and cameras. The sensors used in these devices would be able to detect whether an object is a pedestrian, bicycle, or something else, at a distance of up to 200 meters.