In 2015. the global wind tower market was estimated at $26,140.5 million, and is expected to witness a CAGR of 7.4% during the forecast period (2017–2022). The major factors driving the market include the increase in wind power capacity installations globally and government support for wind projects. Geographically, Asia-Pacific accounted to have the largest share in the wind tower market with an estimated value of $10,014.2 million in 2015. 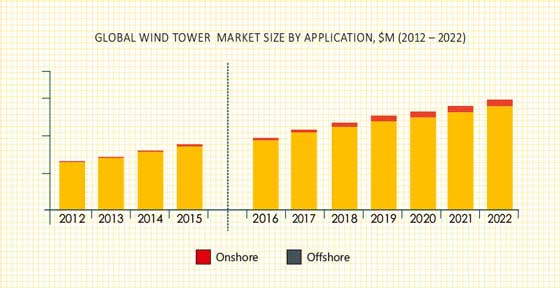 Wind towers are tall structure that supports wind turbines and its components. The tower holds the rotor and nacelle of the turbine, as well as it supports the blades to safely clear the ground. The wind turbine is positioned at an optimum height in order to produce electric energy from wind. Higher capacity turbines require high wind speed. Hence, for efficient power generation, the height of wind tower is a vital factor since speed of wind increases with the height of the turbine. Also, tall towers have lesser turbulence, thereby maximizing performance of heighted wind power plants. Structure and nacelle are the main factors for the selection of a wind turbine. Moreover, the material used, weight and gauge of the turbine are the major factors on which the strength of the turbine is dependent.

Wind towers are chosen on the basis of structure and weight of nacelle. The strength of the wind tower largely depends upon the material used, along with its weight and gauge.

The offshore segment is likely to experience the fastest growth (17.0% CAGR) by application during 2016–2022 in the wind tower market. Tubular steel towers demonstrated the largest market share, by wind tower type with an estimated value of $23,035.1 million in 2015, which is expected to reach $39,108.7 million by 2022.

In order to reduce the dependency on conventional energy sources, several governments across all regions are looking out for alternative source of energy. Since wind is one of the most efficient alternatives for conventional fossil fuel-based energy, a high growth is expected to be witnessed by the industry during the forecast period. Thus, this is expected to drive the growth of the wind tower market.