The global wind tower market was valued at $24,974.3 million in 2021, which is further expected to increase to $51,972.4 million by 2030, advancing at a CAGR of 8.5% during the forecast period. This can be ascribed to the rising need for power generation, growing population, surging adoption of green energy, increasing demand for the reduction of greenhouse gas emissions, favorable government initiatives and regulations, depletion of fossil fuels, and rapid urbanization and industrialization. 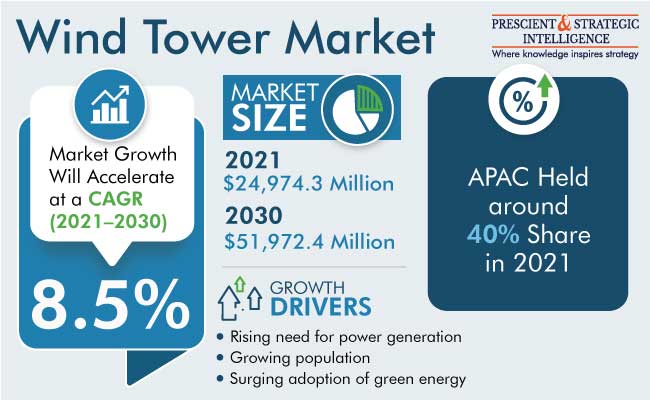 Concrete towers held around 55% revenue share in 2021. This is because they have low transportation costs and high strength and are frequently used for huge turbines, which are, additionally, taller and require larger rotors. Moreover, the raw material for them is readily available, which drives the industry growth.

Furthermore, hybrid towers will gain traction in the coming years due to their low weight and sturdier material (a combination of tubular steel and concrete) and the increasing usage of taller wind turbines, as they reduce the cost of the tower and also provide the required strength.

Guyed-pole towers also held a significant revenue share in 2021. This can be attributed to the increasing installation of small wind turbines supported by guy wires, as they are easy to install and less expensive and can be used where the required land area for a wind farm is less. 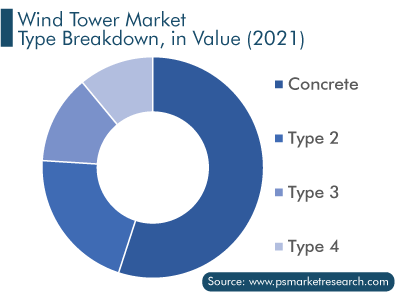 The key trend being witnessed in the industry is the technological advancements in wind energy equipment. The aim is to improve the efficiency of wind power generation and lower the cost of tower manufacturing. The increasing research and development have led to the advent of hybrid towers, which are a combination of tubular steel and lattice towers or tubular steel and concrete towers. This significantly reduces the cost of the overall wind tower, as the material used in manufacturing is reduced.

The onshore category contributed the higher revenue in 2021, and it is further expected to lead the market in the coming years. This is due to the high demand for wind power and the comparatively low setup and maintenance costs, quick installation, and low impact of such wind farms on the surroundings. Hence, according to the IEA, in 2021, a total of 830GW wind capacity was installed, of which over 90% was accounted for by onshore systems.

Additionally, onshore wind is a developed technology, present in over 115 countries across the globe. The development of turbines with longer blades and taller towers is one innovation that industry leaders are concentrating on to increase the productivity of the technology, particularly in regions with low wind velocities.

Offshore applications will witness the faster growth during the forecast period. This growth can be ascribed to the increasing installation of such turbines, need for higher energy generation, growing number of offshore wind projects, and less visual pollution created by them. In addition, the increasing technological advancements in offshore towers, such as floating platforms, which can be used at great sea depths, are driving the overall market size.

The increasing government support for wind projects is the key driver propelling the industry growth. The rapid depletion of fossil fuels and the global warming caused by their usage have shifted the worldwide interest from conventional energy to green energy. Governments across the globe have initiated several projects and schemes to promote and encourage the generation of wind energy.

Moreover, stringent environmental regulations are being implemented around the world by international organizations in order to decrease the emission of greenhouse gases. This further compels local utilities to adopt clean and safe energy, which is propelling the wind tower demand.

APAC was the highest revenue contributor, with around 40% share, in 2021, and it is further expected to maintain its dominance during the forecast period. This can be attributed to the increasing government support for eco-friendly technologies and the growing need for dependable, clean, and cheap power owing to the rising population. Additionally,

Moreover, LATAM and the MEA offer a lucrative opportunity for wind towers, as there are fewer large-scale wind farms here as compared to other regions across the globe. However, several countries across LATAM and Africa are framing regulations to reduce their dependence on petroleum fuels and increase the production of renewable energy, which creates abundant opportunities for the manufacturers of such towers for capacity and geographical expansion.

In addition, there also lies an opportunity for new players to establish their presence in the region. As a result, the vast untapped potential for wind towers across such regions would draw investors and new competitors to tap its potential. 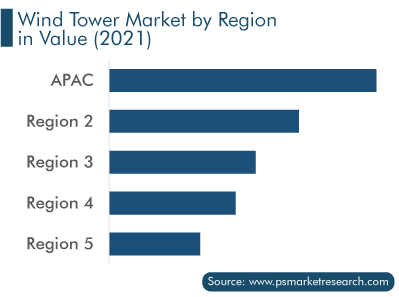 One of the most-rapidly expanding renewable energy sources is wind energy, in part, because the prices of raw materials and the finished masts are decreasing. Over the previous two decades, the installed wind capacity, both onshore and offshore, has expanded globally by a factor of over 75. The production of wind power grew year-on-year by a record 273 TWh in 2021 (17%). This growth rate was the greatest among all renewable power technologies and was 55% greater than that achieved in 2020.

Additionally, the world's two largest wind power economies, China and the U.S., installed an unprecedented number of masts in 2020, accounting for more than half the world's total wind power capacity. Together, they accounted for about 75% of the new installations worldwide. However, in order to maintain the net-zero energy trajectory and prevent climate change, the world needs to deploy wind power three times more quickly during this decade.

Based on Tower Type

Frequently Asked Questions About This Report
How much is the wind tower market worth?+

At what CAGR is the wind tower industry projected to grow?+

How can I get a report sample of the wind tower market?+

A sample report of the market for wind towers can be booked on our website.

What are the wind tower industry drivers?+

The wind tower industry is driven by the growing energy demand, rising focus on clean sources of electricity, and burgeoning population.

What are the key benefits of the wind tower market report?+

The report on the market for wind towers gives a detailed overview of the wind power industry, including the demand for wind towers till 2030, government regulations and planned projects, and company profiling.