The global vapor recovery units market revenue was $758.5 million in 2021, and it is expected to reach $1,177.8 million by 2030, advancing with a CAGR of 5.0% during 2021–2030. This can be primarily ascribed to the increasing production of oil & gas and, in turn, of petrochemicals. Furthermore, the rising concern about the toxic emissions from petrochemicals and strict regulations for volatile organic compound (VOC) emission reduction are responsible for the market growth. 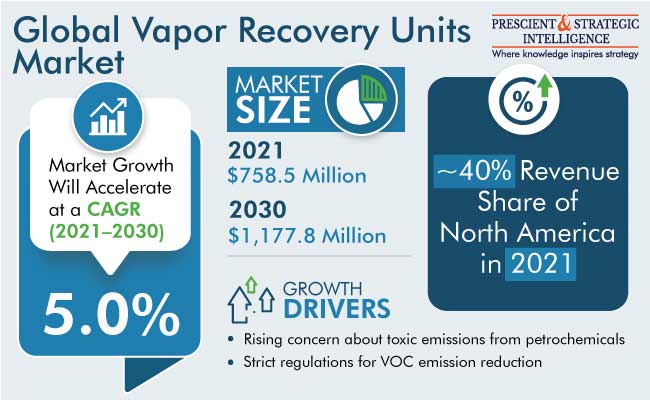 The transportation category is expected to observe the highest CAGR during the forecast period, over 5%. This will be due to the growing demand for petroleum, petrochemical products, and other commodities, as well as the widespread use of recovery units in automobiles to reduce VOC emissions. In this regard, the rigorous government rules limiting VOC emissions will boost the industry growth.

The storage category held the largest vapor recovery units market revenue share in 2021. This is because vapor recovery systems for storage tanks can be used to recollect vent gases from crude petroleum and distillation tanks at storage sites. In this regard, the growing number of crude oil storage tanks around the world has increased the demand for VRUs. For instance, according to the U.S. Environmental Protection Agency (EPA), there are over 500,000 crude oil storage tanks in the U.S.

The oil & gas industry accounted for the largest revenue share, of approximately 40%, in 2021, and it is expected to maintain the trend over the forecast period. This can be ascribed to the expanding oil and gas utilization, increasing number of refineries, and rapidly changing environmental laws. Additionally, the rising demand for downstream processes and emission control systems across the industry fuels the market expansion. 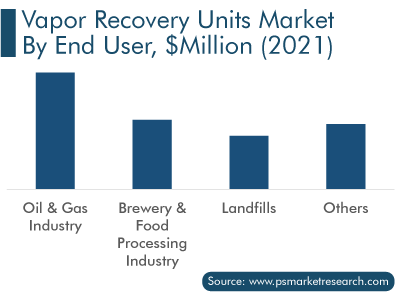 The upstream process generated the majority of the revenue in the market in 2021, and it is expected to maintain the same trend during 2021–2030. This huge revenue is mainly generated from upstream oil & gas processes, including exploration and production activities. Thus, the increase in the number of upstream projects in North America and the Middle East drives the demand for VRUs. As a result, the high usage of these vapor recovery units in the upstream category will boost the vapor recovery units market advance.

The North American vapor recovery units market accounted for the largest revenue share, of approximately 40%, in 2021, and it is expected to continue its dominance during the forecast period. This will be owing to the growth of end-use industries, including pharmaceutical and petrochemicals, which are also taking initiatives for improving their vapor recovery process in the region. Furthermore, the discovery of new shale oil and gas reserves accelerates the region's market expansion. The U.S. is majorly contributing to the region’s industry growth and the huge number of VRUs being installed in oil production sites.

APAC will register the fastest growth in the market during the forecast period owing to the increasing investments in oil & gas capacity addition, itself due to the rising demand for these commodities and petrochemical derivatives; and growth of the manufacturing industry. Emerging economies, such as China and India, are contributing considerably to the market with their rising population and rampant urbanization and industrialization. 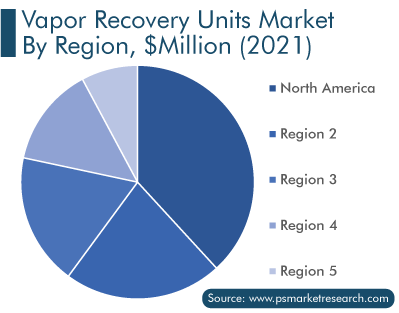 VOC emissions into the atmosphere emanate from a number of industries, and they, upon their release, mix with the air. VOCs are dangerous airborne contaminants that can harm the environment. In order to prevent the detrimental consequences of VOC emissions, government agencies in several nations have enacted severe environmental protection laws. These legislative changes require the installation vapor recovery units in each of the operations of the petroleum industry. For example, the U.S. EPA issued a set of guidelines in May 2016 to minimize VOC, methane, and other harmful emissions from the oil & gas sector. Methane emissions from the country's oil & gas industry must be cut by 40–45% by 2025, according to the new rules.

The membrane separation technology will account for the fastest growth in the vapor recovery units market, with a CAGR of over 5%, during the forecast period. This can be ascribed to the cost-effectiveness of installing and using membrane separators in VRUs. Moreover, membrane-separation-based VRUs have a better recovery rate and offer a massive reduction in the cost of maintenance.

The adsorption technology contributed the highest revenue to the market in 2021, and it is expected to maintain its position in the forecast period. This is because adsorption-based VRUs are widely used for the recovery or removal of sulfur from crude oil, along with preventing the dangerous VOCs from being discharged into the environment during evaporative hydrocarbon transfer activities.

Major players in the vapor recovery units market are engaged in launching new products, partnerships, and acquisitions to achieve a better position. For instance,

Frequently Asked Questions About This Report
What was the vapor recovery units market value in 2021?+

What is the growth rate predicted for the global vapor recovery units industry?+

What are the major driving factors for vapor recovery units market?+

The market for vapor recovery units is driven by the growing scale of E&P activities and stringent VOC emission reduction regulations.

What is the current competitive landscape in the vapor recovery units industry?+

The competitive landscape of the vapor recovery units industry is characterized by acquisitions, facility expansions, and product launches.

What is the biggest end user in the vapor recovery units market?+

The oil & gas sector generates the highest revenue in the market for vapor recovery units.