The urban air mobility (UAM) market value will be $895.0 million in 2023, and it is predicted to reach $6,889.4 million by 2030. Furthermore, the market is predicted to progress at a CAGR of 33.9% between 2023 and 2030. The surging road traffic in major cities and increasing number of product launches will be the strongest market growth drivers. 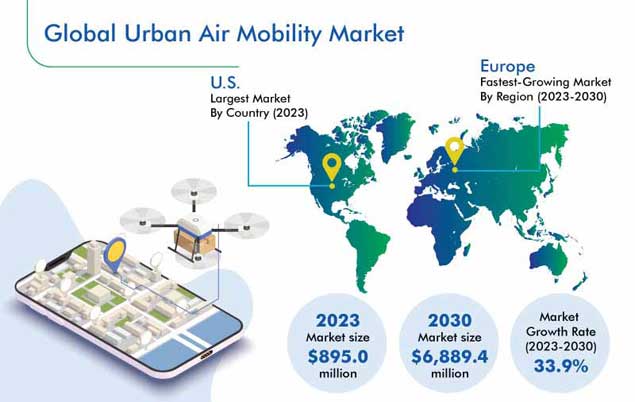 The intercity category is predicted to demonstrate the faster growth in the market for urban air mobility services during 2023–2030, under the range segment. This will be because of the longer flight range of electrical vertical take-off and landing (eVTOL) aircraft due to the rapid technological advancements in the motor, battery, and fuselage.

The autonomous operation type category is expected to dominate the market in the coming years. The key factor driving the expansion of this category in the urban air mobility market is the fact that autonomous aircraft are better suited for passenger and cargo services than the piloted ones. Furthermore, aircraft manufacturing companies, airspace integration researchers, and infrastructure providers are making huge investments in autonomous UAM services.

North America is expected to hold the largest share in the market for urban air mobility services from 2023 to 2030. This is attributed to the fact that people residing in major North American cities will increasingly opt for air taxi and airport shuttle services on account of the escalating traffic congestion. Furthermore, in the U.S., last-mile and cargo services are expected to be extensively provided with eVTOL aircraft, which will positively impact the market advance in the region. 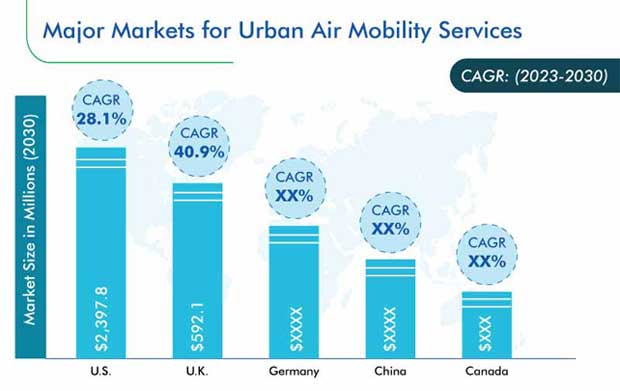 One of the major trends currently being witnessed in the industry is the soaring investments in the startups operating in this niche. Leading companies operating in the ground transportation domain and those that offer cargo aircraft and conventional passenger services or manufacture automobiles are some of the major investors. For example, in January 2020, $394 million were invested by Toyota Motor Corp. in Joby Aviation LLC, a manufacturer of eVTOL aircraft, so that the former could penetrate the urban air mobility market. Similarly, an investment worth $25 million was made by Hanwha Systems Co. Ltd. in Overair Inc., a developer of fully electric air taxis, called Butterfly, in December 2019.

The worsening road traffic conditions in the highly populated cities are a major factor that will fuel the expansion of the urban air mobility industry. The surging road traffic in urban areas is causing long traffic jams, which is, in turn, leading to the wastage of valuable time. This is subsequently slowing down the economic progress of many countries. For example, Americans, on an average, spend 90 hours in traffic jams every year. Moreover, traffic jams augment the annual transportation expenditure of Americans by more than $1,000.

Additionally, the increasing road traffic congestion is causing a sharp surge in the incidence of road accidents, especially in emerging economies such, as India, China, and Indonesia. Because of these reasons, the popularity of autonomous aerial mobility solutions is growing rapidly across the world, which will fuel the progress of the market 2023 onward.

Since the urban air mobility market is a future opportunity, major companies hoping to make a fortune are entering into partnerships and joint ventures, to give them the maximum chance of success.

For instance, in January 2020, Uber Technologies Inc. began a partnership with Hyundai Motor Co. to offer ridesharing services via its air taxis. With this partnership, Hyundai became the first automaker to join the Elevate initiative of Uber. Under the terms, Hyundai will manufacture and deploy the aerial vehicles, while Uber will offer customer interface, support service, and connections to ground transportation through an aerial network.

Similarly, in December 2019, Kitty Hawk launched the Wisk joint-venture with The Boeing Company, to develop and manufacture Cora, which would be an all-electric, self-flying eVTOL air taxi with a two-person capacity. Kitty Hawk plans to initially launch the services in New Zealand.

The report offers comprehensive market segmentation analysis along with market estimation for the period 2023–2030.

Based on Operation Type

Frequently Asked Questions About This Report
What is the revenue forecast for the urban air mobility market?+

Will COVID-19 have any effect on the urban air mobility industry?+

COVID-19 will not have any effect on the urban air mobility industry, which is likely to come into existence only in 2023.

Which type of aircraft will witness the higher usage in the urban air mobility market?+

Passenger aircraft will witness the higher usage in the urban air mobility market.

What is the urban air mobility industry growth dependent on?+

Presently, the urban air mobility industry growth depends on investments and the success of pilot projects.

Which will be the key region for the urban air mobility market players?+

North America will be the key region for the urban air mobility market players.