The global unmanned underwater vehicles (UUVs) market generated ~$4 billion revenue in 2020. The major factors behind the growth of the market are the rising defense spending of countries worldwide and growing demand for seafloor mapping data.

During the COVID-19 pandemic, lockdowns and partial factory closures negatively impacted manufacturing facilities across the globe. As COVID-19 continues to spread around the world, companies have taken drastic steps, such as plant closures, to contain it and ensure employees’ safety. Thus, with the sudden imposition of lockdowns, the market for UUVs witnessed a corresponding reduction in the revenue for product and technology providers and raw material suppliers owing to the delays in manufacturing and delivery. Nonetheless, since the last quarter of 2020, the market has started recovering and initiated a growth trend. 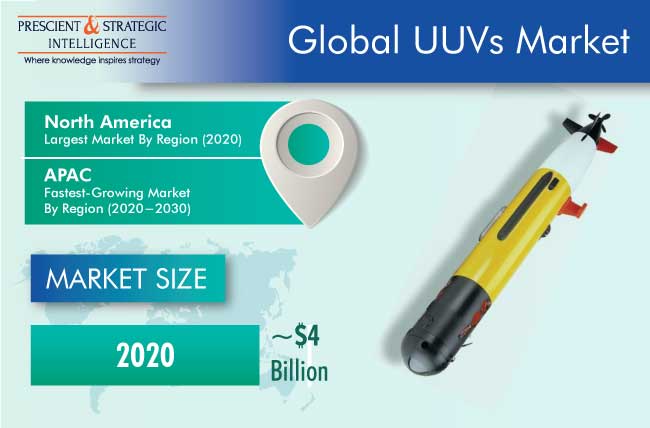 Due to Growing Demand, Seafloor Mapping Data and AUVs Category Is Expected To Be Fastest Growing

Autonomous underwater vehicle (AUVs) are expected to be the fastest-growing category in the unmanned underwater vehicles market during the forecast period, based on type. Furthermore, the category is expected to retain its dominant position in the upcoming years. This can be ascribed to the wide usage of these platforms in the oil and gas industry to make detailed maps of the seafloor before building the subsea infrastructure. This makes the installation of pipelines and systems easy and cost-effective, with minimal destruction of the environment.

The commercial category held the largest share in 2020 in the UUVs market, based on application. This can be mainly attributed to the several commercial applications of UUVs, such as survey and seabed mapping, offshore drilling, pipelining, and cabling.

Geographically, North America was the largest contributor to the unmanned underwater vehicles market, in 2020. This is mainly attributed to the rising use of advanced underwater inspection techniques and increasing need for maritime protection. In addition, the increasing defense spending on advanced unmanned military and navy equipment has further resulted in the growth of the regional market. Moreover, major stakeholders continue to focus on improving the autonomous functions and increasing the battery life of UUVs. 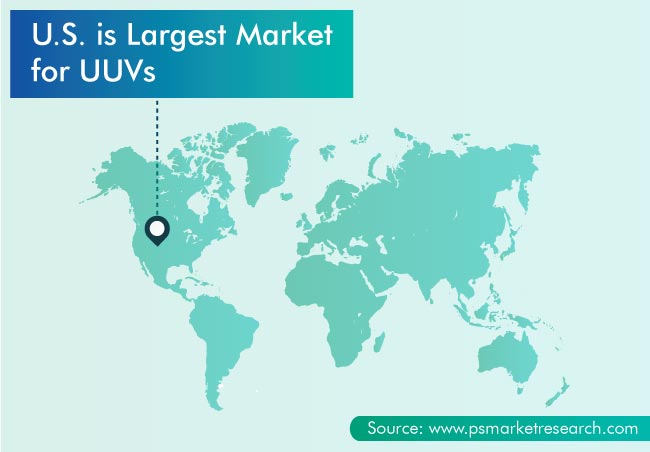 A wide range of vehicle types and applications, as well as a number of creative approaches to boost the effectiveness of UUVs, have been developed. Battery technology, underwater communication, propulsion systems, and sensor fusion are all examples of components that have undergone technological advancements. UUVs equipped with advanced technologies can conduct underwater surveys for up to two days, since the operators remain on the ground. For instance, underwater vehicle Hugin by Kongsberg Gruppen ASA can operate for up to 100 hours due to its advanced battery technology. Such advancements in the UUV technology can be viewed as a major trend in the unmanned underwater vehicles market. 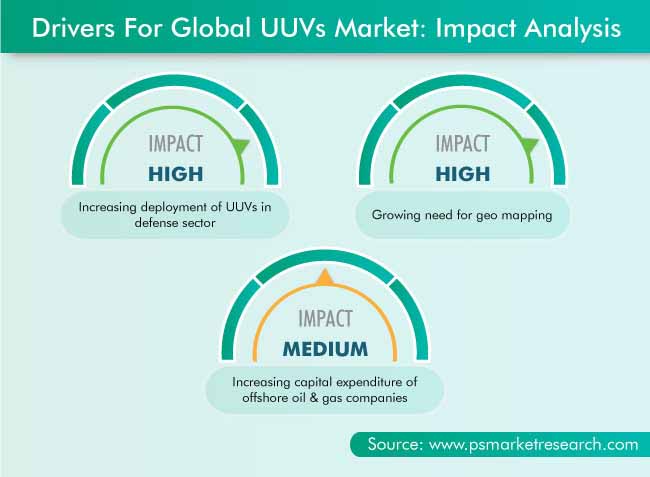 UUVs play a significant role in naval warfare as they offer significant standoff and clandestine capabilities and have the ability to adapt intelligently to the changes in tactical situations. Their onboard systems are capable of adapting to the mission plan and recognizing changes without the need for intervention by operators. Thus, navy and other departments of defense in several countries are partnering with private players to conduct research and development (R&D) for next-generation UUVs. For instance, in February 2021, the U.S. Defense Advanced Research Projects Agency (DARPA) selected three contractors for a UUV development program, named the Manta Ray Project.

In recent years, players in the UUVs market have been involved in partnerships in order to attain a significant position. For instance:

Some Key Players in UUVs Market Are:

Frequently Asked Questions About This Report
What are the different segments of the UUVs market report?+

The market for UUVs is segmented by type, propulsion, application, and region.

Which is the largest application category in the UUVs industry?+

The commercial category held the largest share in the application segment of the UUVs industry.

What is the regional scenario of the UUVs market?+

North America is the largest market for UUVs.

What is the key trend in the UUVs industry?+

Technological advancements are trending in the UUVs industry.

What is the nature of the UUVs market?+

The market for UUVs is consolidated.