The global unmanned ground vehicles (UGVs) market was valued at ~$3 billion in 2020. The major factors responsible for the growth of the market are the increasing use of robotics in areas affected by chemical, biological, radiological, and nuclear attacks, as well as the rising demand for autonomous systems in the defense and commercial sectors. Furthermore, the rising government investments in the development and acquisition of UGVs will accelerate the market growth.

During the COVID-19 pandemic, lockdowns and partial factory closures negatively impacted manufacturing facilities across the globe. As COVID-19 continues to spread around the world, companies have taken drastic steps, such as plant closures, to contain it and ensure employees’ safety. Thus, with the sudden imposition of lockdowns, the market witnessed a corresponding reduction in the revenue for product and technology providers and raw material suppliers owing to the delays in manufacturing and delivery. Nonetheless, since the last quarter of 2020, the market has started recovering and initiated a growth trend. 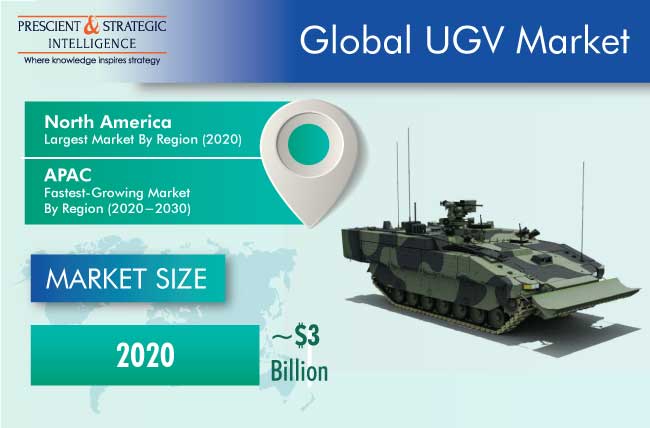 Due to Integration of Advanced Features, Autonomous Category Is Expected To Witness Fastest Growth

The autonomous category of the UGVs market is expected to grow at the fastest pace during the forecast period, on the basis of mode of operation. The autonomous mode allows UGVs to carry out tasks and operations without the need for human interference. Safe communications and control, autonomous path following and obstacle avoidance, automated target detection, and data compression capabilities in UGVs are expected to assist militaries in reconnaissance, surveillance, and target acquisition (RSTA) missions.

The federal law enforcement category is expected to have the highest CAGR during the forecast period, based on application. Various federal law enforcement agencies around the world, including the Federal Bureau of Investigation (FBI) in the U.S., the Russian Police (politsiya) in Russia, and the Ministry of Defence Police in the U.K., use UGVs for intelligence, surveillance, target acquisition, and reconnaissance (ISTAR) and explosive ordnance disposal (EOD).

The unmanned ground vehicles market is categorized into wheeled, legged, tracked, and hybrid, on the basis of mobility. Among these, the wheeled category is projected to have the highest revenue. The demand for wheeled robots for applications where the terrain is reasonably even with few obstacles is increasing.

During the forecast period, North America is expected to have the largest share in the unmanned ground vehicles market. The U.S. is one of the world's largest manufacturers, users, and exporters of unmanned military systems, which is why it accounts for much of the revenue of the North American UGVs market.

The two North American countries are awarding numerous contracts to major global unmanned ground vehicles market players for the delivery of combat-capable UGVs. For instance, the U.S. has deployed a number of unmanned systems along the Mexican border to ensure that gang-related violence and disputes are handled carefully, without any harm to humans. 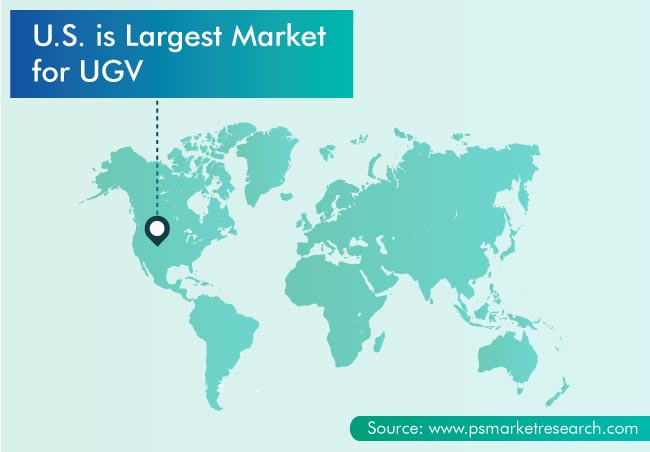 Autonomous UGVs are often used in rugged terrain, areas with harsh weather conditions, and places that are inaccessible to humans. In such situations, the use of these robots reduces the possibility of harm to security personnel. Furthermore, UGVs are being integrated with artificial intelligence (AI) and machine learning (ML) so they can adjust the strategies based on the surroundings and adapt to the surroundings without outside assistance. For instance, in April 2021, Indian start-up Torus Robotics Pvt. Ltd. signed a memorandum of understanding (MOU) with the Government of India for the joint development of AI-based UGVs for the armed forces with BEML Limited. Both the companies are now developing a high-altitude UGV with a 750-kilogram payload. It will be an all-terrain autonomous vehicle, which is expected to be used for logistics and surveillance, even in bad weather conditions. Therefore, technological advancements is a major trend witnessed in the UGVs market.

Governments around the world are increasing their military spending and investing heavily in upgrading their defense fleets, which would benefit the UGVs market outlook. UGVs are used in a variety of defense applications, including search and rescue, transportation, and combat support. For instance, in March 2020, HORIBA MIRA announced that it has secured a major $3.25 million (GBP 2.3 million) contract to supply VIKING autonomous UGVs to the U.K. Defence Science and Technology Laboratory (Dstl).

In recent years, players in the market have been actively involved in collaborations and partnerships to offer better UGVs. For instance,

Some Key Players in Unmanned Ground Vehicles (UGVs) Market Are:

The UGVs market report offers comprehensive market segmentation analysis along with market estimation for the period 2015-2030.

Based on Mode of Operation

Frequently Asked Questions About This Report
What was the value of the global unmanned ground vehicles market in 2020?+

How has the COVID-19 pandemic impacted the unmanned ground vehicles market?+

The COVID-19 pandemic has negatively impacted the progress of the unmanned ground vehicles industry.

Which was the largest regional market for unmanned ground vehicles in 2020?+

North America was the largest regional market for unmanned ground vehicles in 2020.

Which will be the fastest growing region in the unmanned ground vehicles industry during 2021–2030?+

Asia-Pacific will be the fastest growing region in the unmanned ground vehicles industry during 2021–2030.

Why will the North American unmanned ground vehicles industry boom in future?+

The market for unmanned ground vehicles will surge in North America in future because of the increasing procurement of unmanned military systems by the U.S. and Canada.