The consumption of regular milk is reducing in developed countries as well as the urban areas of developing nations due to its perishable nature. As an alternative to conventional milk, the ultra-heat-treated variant is consumed all over the world. The global market is being primarily driven by two factors: an increase in the number of people with busy schedules and a lack of refrigeration facilities in emerging economies. 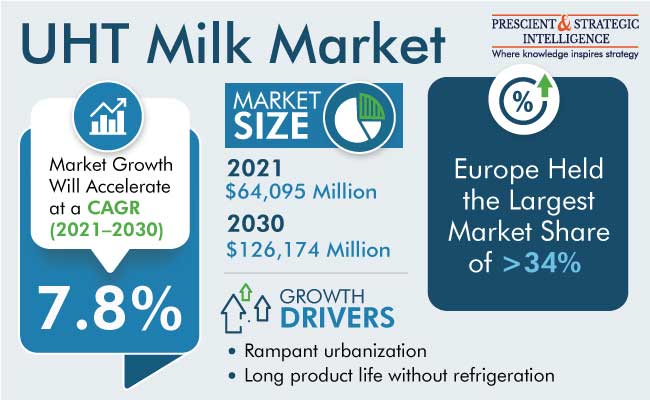 Whole milk, also referred to as full-cream milk, is the most common variety of milk, and it is typically offered with a fat level of 3.5% or more. This category accounted for around 60% market share in 2021. Due to the significant amounts of calcium, phosphorus, and vitamins A, B1, and D, whole milk is advantageous during the developing years.

It is majorly consumed by children, teenagers, breastfeeding mothers, and bodybuilders due to its high nutrient value. When it comes to restaurants and cafés, where a significant demand for milk with a high whipping quality exists, whole milk is widely popular.

Toddlers less than 2 years of age are ideal consumers of whole milk, as it supplies them the essential nutrients during the crucial stages of development. Many market players are constantly investing in newer technologies, since ordinary milk is more prone to bacterial colonization and the UHT variant has garnered a growing interest for its non-requirement for refrigeration. Hence, the major characteristics driving the market are the longer shelf life and stability at room temperature of this product.

For Instance, Amcor PET Packaging Europe has launched the first range of monolayer plastic bottles for long shelf life of the milk.

Semi-skimmed UHT milk will be the fastest-growing category during the forecast period. Health-conscious consumers prefer a lower fat content in the diet; thus, with the use of semi-skimmed milk, the fat intake can be reduced from teas, coffees, and hot chocolate, without compromising on the flavor. This variant is preferred by consumers who like a creamy texture and a rich flavor of coffees, custards, and milk puddings. 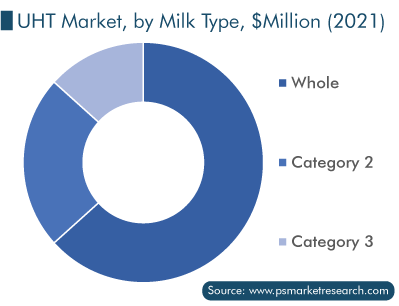 With the adoption of several trends related to lifestyle and the Western culture, many developing countries in Asia-Pacific and the Middle East and Africa are going for apartments. Thus, in countries such as China and India, people are being influenced to use products with a longer shelf life.

Europe is the largest market, with a share of more than 34% in 2021, attributed to the stringent regulations in regional countries regarding the shelf life and safety of milk. Moreover, there are certain regulations that allow the import of dairy products from only certain countries and, that too, after extensive treatment and quality testing. Therefore, in order to meet the growing demand for UHT milk, most countries in the region produce it themselves in sufficient quantities. Furthermore, Germany, France, and Belgium have a prominent dairy culture, which results in a considerable growth in sales for the European market players.

North America is the second-largest shareholder in the market due to the rising income here, which is allowing families and individuals to purchase this commodity. Moreover, it offers a good nutritional value and is lower-priced and easily available at supermarkets and hypermarkets, which have expansive networks across the continent. 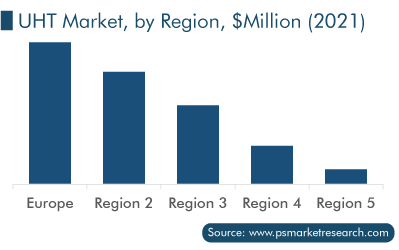 Direct/Institutional Sales Will Have Highest CAGR during Forecast Period

The direct/institutional category will garner the highest CAGR, of around 8%, during the forecast period. This is attributed to the growing sales by government institutions and food service chains. To meet the milk market demand, particularly for variants with a higher whipping capacity, restaurant chains are emerging as key customers. These establishments can reduce the cost of milk per unit item bought for mass consumers, as direct/institutional channels majorly sell it in bulk. Defense and security personnel are also driving forces for the demand for this milk, as they consume it regularly.

UHT treatment helps in the destruction of microorganisms in dairy products and dairy alternatives. This is a flexible and cost-efficient technology used by service outlets, such as Starbucks and McDonald’s, which require good-quality milk for meeting the high customer expectations, along with their own requirement for a longer shelf life.

Top Producers of UHT Milk Are:

Based on Milk Type

Frequently Asked Questions About This Report
What are the major trends in the global UHT milk market?+

Direct/institutional sales are trending in the market for UHT milk.

What are the major regions in the global UHT milk industry?+

Europe, North America, and Europe are the major regions in the UHT milk industry.

Which are the product insights of the UHT milk market?+

The market for UHT milk is led by whole milk, while semi-skimmed milk sales will rise the most rapidly.

What is the current valuation of the UHT milk industry?+

What are the key driving factors for the UHT milk market?+

The market for UHT milk is driven by the rampant urbanization and long product life without refrigeration.