The U.A.E. packaged drinking water market size is estimated to have stood at $625.4 million in 2021, and it will grow at a CAGR of 4.7% during 2021–2030. The market is driven by the increasing urban population, the growing tourism sector, and the surging demand for functional and flavored water in the country. The bottled water consumed by an adult at almost 34 gallons a year. Hence, it is expected that the packaged water industry outlook will grow during the forecast period.

The effects of COVID-19 were wide and varied, but the most important of them were the issues related to the demand–supply imbalance caused due to various lockdowns and restrictions, and disruption in foodservice channels as there was a sharp decline in tourism and out-of-home consumption. 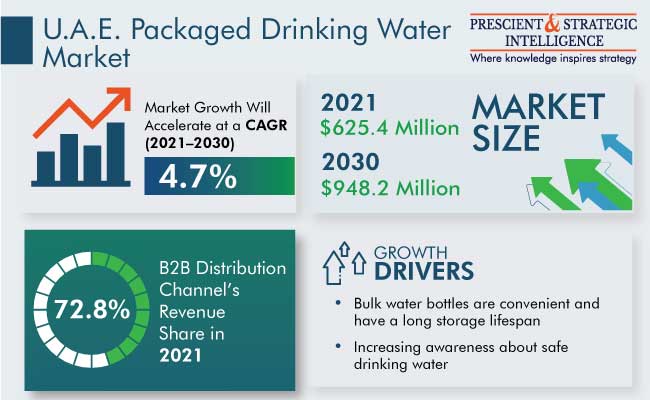 Growth Areas of the Market

B2B Is Higher Revenue Generator in the Market

In the U.A.E. market, the B2B distribution channel held an estimated revenue share of 72.8% in 2021. This is primarily due to the increasing number of corporate offices in the country. For instance, Dubai Chamber revealed that a total of 16,000 new companies joined in the first eight months of 2021, bringing its total membership to over 275,000, posting year-on-year growth of 68.5%. 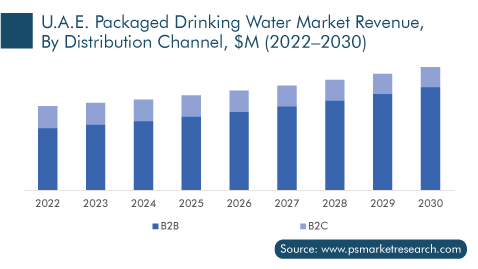 The online mode is projected to record a higher CAGR, over 10%, during the forecast period in the market. U.A.E. retailers are investing in digital sale channels at a rapid pace by developing a catalog of online products. As per the International Trade Administration, the U.A.E. is the largest e-commerce market among all GCC states, and the country’s online sales increased by 53% in 2020, to a record value of $3.9 billion. Additionally, that year, e-commerce constituted 10% of the total retail sales in the country, which clearly shows the growing popularity of online shopping among residents.

Packaged bulk drinking water consumed in workplaces held 33.1% revenue shares in 2021 as most of the offices use bottled water for drinking purposes. It is said that a healthy workforce is a productive workforce. In the country, there are stringent regulations about employee health. For instance, the Ministry of Human Resources & Emiratisation has cautioned companies that workers must be supplied with water at all times, as well as minerals that are approved for use by health authorities. Moreover, employees generally spend 9–10 hours in offices, hence to provide them safe and drinking water is most important. Thus, companies order a sufficient amount of packaged drinking water. 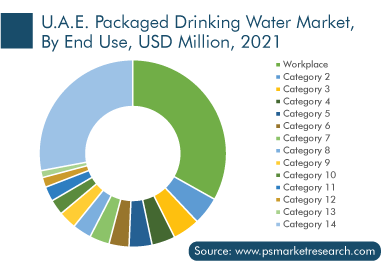 Increase Awareness about Safe Drinking Water Will Drive the Demand

Sufficient amount of safe water for human consumption is not available everywhere in the nation. This is because harmful chemical substances found in the earth’s surface either seep into the water or pathogenic microorganisms contaminate this precious resource. Drinking such water can cause a number of water-borne diseases, majorly parasitic infections. Owing to such reasons, people are switching to packaged drinking water to prevent the spread of such diseases.

Improved water supply and sanitation, as well as better water resource management, can boost a country's economic growth and contribute significantly to public health. For instance, Emirates Standardization and Metrology Authority (ESMA) stated that federal testing and monitoring of all plastic bottles in the country meet the domestic and international safety standards. Hence, the rising demand for clean water is driving the growth of the market.

Functional beverages are non-alcoholic drinks containing non-traditional ingredients like minerals, amino acids, dietary fibers (DFs), vitamins, probiotics, added raw fruits, and others. Energy drinks, sports drinks, and functional bottled water are examples of functional and fortified beverage categories that have seen an expansion in recent years. This expansion can be linked to the increase in interest in health and wellness activities, rise in urbanization, and more health care awareness. Functional beverages are important in our modern lifestyles since they contribute to nutritional well-being. Functional/fortified water has various advantages over plain water, for instance, to promote exercises, weight training and weight management, and overall health, and the protein water can be used as a low calorie, protein source with more flavor possibilities.

Major players in the market have been involved in product launches strategy to remain competitive. For instance:

Key Players in the U.A.E. Packaged Drinking Water Market Are:

Frequently Asked Questions About This Report
How much will the U.A.E. packaged drinking water market value in 2030?+

How much CAGR is the U.A.E. packaged drinking water market expected to register during 2021–2030?+

Which is the most-significant distribution channel in the U.A.E. packaged drinking water industry?+

B2B is a larger category under the distribution channel segment of the U.A.E. packaged drinking water industry.

What are the key drivers for the U.A.E. packaged drinking water market?+

The U.A.E. packaged drinking water market drivers are the increasing urban population, the growing tourism sector, and the surging demand for functional and flavored water.

Which is the strongest strategic measure among players in the U.A.E. packaged drinking water market?+