The increasing number of TV viewers and growing interest of Turkish people in documentaries are the key growth drivers for the documentary television market in the country. The number of TV viewers in Turkey has increased considerably in the recent past. The regular TV watching population in the country has increased from 39% in 2009 to 58% in 2014. The occasional TV watching population has also increased in the recent past. This includes the viewers of documentaries. Among the various media formats, the investment in television by the media companies has increased from 52% of the total media investment in 2009 to 60% in 2014. This also shows a favorable environment for the TV programming and related markets. 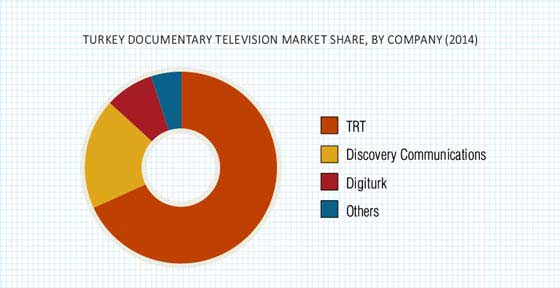 Earlier, documentaries in country were considered an offbeat genre that was liked by very less number of people. RTUK (The Supreme Council on Radio and Television) oversees the content of TV broadcasts in Turkey. RTUK had been using documentaries as a punishment, as when a program broadcast on a particular TV channel was found to be against the regulation; the TV channel was required to show a documentary during that broadcast slot. The documentaries were programmed during festivals at venues with less than adequate screening facilities, owing to low interest of people in them. But the scenario has been changing and the documentaries are now liked by large number of people, including the teenagers. The Turkish Radio and Television Corporation (TRT), the major TV broadcaster in Turkey has established a channel TRT-Belgesel, which is completely dedicated to documentaries. The critical discussions and appreciations on several documentary topics have been observed in the recent past among viewers, which has been driving the growth of the documentary television market in the country.

With the increasing interest of people in documentaries, the production and broadcasting of documentaries are now attracting investment in Turkey. The documentaries are garnering more exposure than before. The independent documentary filmmakers are also receiving partial government support in terms of monetary funding. This has not only been changing the production landscape, owing to increase in funding, but also the filmmakers have more independence in the choice of subject of their documentaries. This is expected to provide ample growth opportunity for the documentary television market in the country.

Wildlife has been the most popular documentary genre among the Turkish TV viewers. The changing tastes and preferences of people have been increasing the viewership in other genres including sports. The key reason for this is large youth population in the country. The median age of people in Turkey in 2014 was 29.6 years.