The global tunnel automation market generated $3.5 billion revenue in 2020, and it is expected to grow at a significant rate during the forecast period (2021–2030). The factors responsible for the growth of the market include strict government regulations; surge in demand for enhanced road safety and security solutions due to the rise in number of road accidents; increase in integration of tunnel automation systems with advanced technologies like cloud storage and internet of things (IoT); combination of analytics in tunnel management; and rise in number of tunnel construction projects around the globe.

With the imposition of multiple lockdowns due to COVID-19 has a negative impact on the tunnel automation market worldwide. The business lockdowns, halted construction and transportation activities, along with migrations of workers to their home states, and supply chain disruption in several countries have affected the market growth. 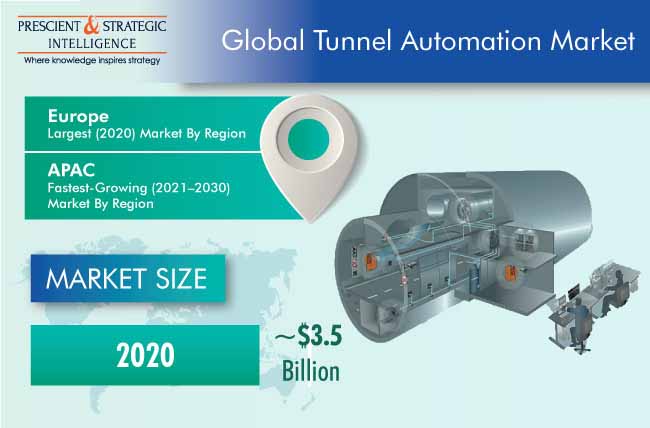 On the basis of component, the HVAC category held the largest share in 2020 and it is expected to showcase the highest growth rate during the forecast period, in the tunnel automation market. Since ventilation inside tunnels is extremely important and its manual operation can be costly, HVAC automated systems can provide much easier solutions, and hence are gaining popularity around the globe. Further, compulsory government regulations to install air conditioning and ventilation systems in tunnels, as these tunnels have limited access to natural ventilation. Therefore, HVAC components are widely used for ventilation and heat exchanging processes in the tunnels.

Europe held the largest share in the tunnel automation market in 2020, and it is expected to lead the market during forecast period as well. This is attributed to the well-established transportation industry, increase in demand for public transportation systems, existence of several mountain ranges, and rise in awareness for the improvement of rail and road safety among consumers, in the region. 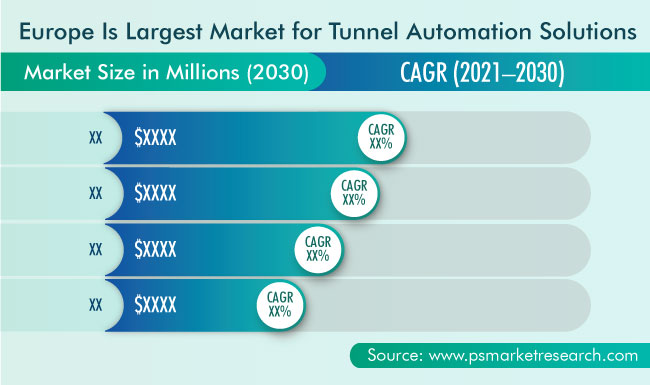 Road safety is a major issue across the globe. Therefore, consumers all around the world are becoming more concerned about road safety, prompting governments to invest in innovative technologies such as tunnel automation to improve security, surveillance, lighting, ventilation, air conditioning, and other facilities. This is expected to drive the market for tunnel automation solutions.

Tunnel automation systems are being integrated with advanced technologies, such as internet of things (IoT), cloud computing, and data analytics, offering customers a huge edge over manual management methods. Data may be shared and transferred between communication systems and other devices, such as thermostats, sensors, and lighting systems, with the help of these technologies. The information collected from these units is used to improve the tunnels’ efficiency by the analysis of the data to control the automation systems.

In April 2018, Johnson Controls International Plc opened its R&D complex in Central Pennsylvania, the U.S., spread over an area of 357,000 square feet. This facility would aid in the development of HVAC products.

Some of Key Players in Tunnel Automation Market Include:

Based on Tunnel Type

Frequently Asked Questions About This Report
How much the tunnel automation market valued in 2020?+

Which is the largest component category in the tunnel automation industry?+

HVAC is the largest component category in the tunnel automation industry.

What is the regional scenario in the tunnel automation market?+

Europe is the largest market for tunnel automation solutions.

What are the key drivers for the tunnel automation market?+

The major tunnel automation market drivers are increasing number of road accidents and integration of IoT- and cloud-based automation solutions in tunnels.

Who are the key players operating in the tunnel automation market?+