The global triazine market stood at $518.68 million in 2019, and it is expected to demonstrate a compound annual growth rate of 5.6% during 2020–2030. The triazine industry is being driven by the rapid growth in the oil & gas and healthcare sectors.

In 2019, significant capacity additions and slowing demand growth caused the industry size to contract, with this decline becoming larger in 2020 due to the COVID-19 pandemic. The COVID-19 impact on petrochemical demand was variable across value chains, with massive reductions in consumption in agrochemical and construction applications, while the demand for this chemical in the sanitary product, food, and pharmaceutical packaging applications remained robust. This is why uneven demand for triazine has been observed across different industries since the outbreak. Despite a few plants shutting down in select geographies, triazine industry players have coped well with the short-term impact of the pandemic. 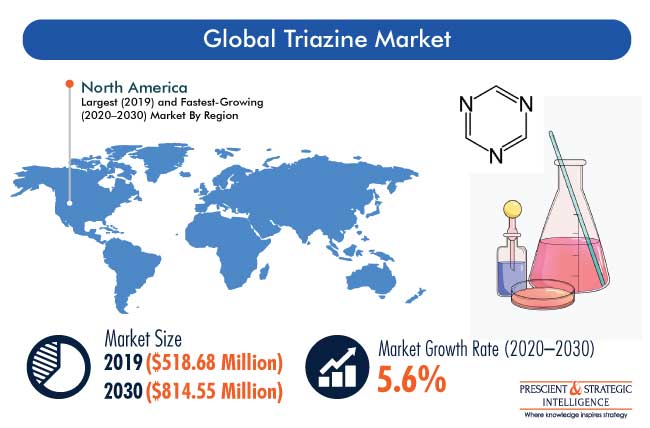 1,3,5 Triazine Accounts for Highest Consumption due to Increasing Usage in Industries

In 2019, 1,3,5-triazine category witnessed the highest volume of consumption in the triazine industry, under the type segment. This is attributed to the fact that 1,3,5 triazine is the most stable isomeric form of triazine and it is widely used in several industries, including chemical and oil & gas. It is extensively used to manufacture triazine derivatives, such as MEA, MMA, and melamine, which are themselves used during the production of various end products. The increasing demand for 1,3,5-triazine-based derivatives for scavenging operations in the oil & gas industry, coupled with their rising consumption for manufacturing pesticides, is further propelling the market growth.

The MEA category, based on product, recorded the highest consumption in 2019, and the trend is likely to continue throughout the forecast period. MEA is widely used in the oil & gas industry as a hydrogen sulphide (H2S) mercaptan and scavenger in hydrogen streams. With the growth of the oil & gas sector globally, reflected in the rise in exploration & production activities, the market category is projected to further grow.

During the forecast period, the oil & gas category will dominate the end use segment. This is primarily because the compound is considered the most cost-effective sour management chemical. Additionally, the rising demand for effective corrosion protection in the pipelines and storage tanks, apart from reducing the emission of harmful odors, is expected to propel the global triazine market during the forecast period.

North America held the largest triazine market share in 2019 due to the rising demand for triazine in the chemical and oil & gas industries. As per the Energy Information Administration (EIA), shale production in the U.S. has increased twelvefold over the last decade. Shale gas is a cheaper alternative to crude oil, and it acts as a feedstock for manufacturing various chemicals. Thus, chemical manufacturers in the country are increasingly preferring shale gas over crude oil for manufacturing commodity chemicals, intermediate chemicals, and triazine, for high profit margins.

Additionally, the increasing investments in the oil & gas sector in the U.S. are expected to propel the compound consumption growth in the region, in turn, providing numerous opportunities to the North American triazine market during the forecast period. Even though oil and petrochemical production declined significantly in 2020 due to COVID-19, it will pick up as soon as the industry reopens, as governments focus on bringing their economic activity back to normalcy. This will fuel the demand for triazine in the U.S. since it is the largest producer and one of the largest exporters of oil in the world. 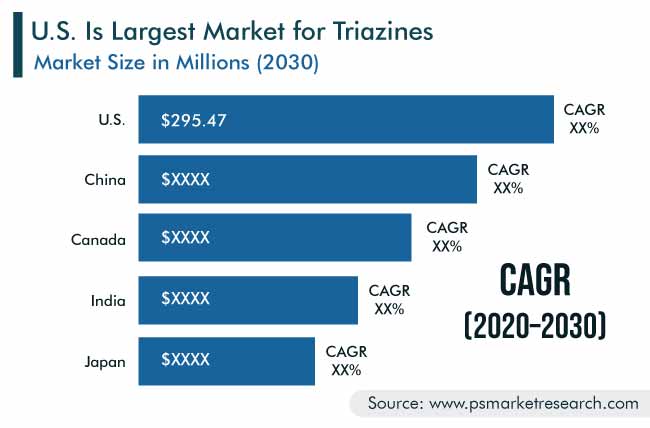 The rise in the number of mergers and acquisitions, which have allowed players to increase their revenue, is the most-prominent trend being observed in the triazine market. Moreover, with mergers and acquisitions, key players in the market can focus on organic growth, access a wider customer base, and bring diversification in their products and services, which further helps in boosting the long-term growth prospects for their business.

For instance, in March 2020, Stepan Company acquired Logos Technologies LLC’s NatSurFact business, a rhamnolipid-based line of biosurfactants. With this acquisition, Stepan Company expanded its product offerings with the addition. Rhamnolipids, a class of biosurfactants, are gaining traction due to their biodegradability, low toxicity, and unique antimicrobial properties.

Market Driven by Increasing Consumption of Triazine at Petrochemical Plants

The compound is widely used as a scavenger chemical to remove H2S from crude oil, in a process known as stripping, along with which it is used to reduce corrosion. E&P companies are strongly mandated to track the concentration of H₂S in petroleum reservoirs, to ensure the safety of workers, as it is a corrosive, life-threatening, and flammable gas. Moreover, sulphate-reducing bacteria can cause petroleum reservoir souring and increase the concentration of H₂S in the produced fluids to the point of making it necessary to inject expensive chemical scavengers in production pipelines, so that the corrosion and operational risks can be minimized. Therefore, with the increasing application of triazine in the petrochemical industry, the market is expected to witness significant growth during the forecast period.

The compound has a wide array of useful pharmacological properties, including antimicrobial and anti-inflammatory action. The molecule also possesses a high significance in pharmaceutical chemistry considering its usage in novel drugs. Furthermore, the triazine ring structure is found in naturally occurring antibiotics, such as reumycin, fervenulin, and toxoflavin. 1,3,5-triazine isomer, one of the oldest-known organic compounds, is used as a lead structure in aceto-guanide, ammeline, cyanuric acid, and acetoguanamine. Hence, such factors are projected to drive the global triazine market during the forecast period.

Usage of Compound Increasing in Agrochemicals for Weed Control

The compound is extensively used in agriculture as a selective pre- and post-emergence weed control agent for wheat, corn, sorghum, sugarcane, and barley. Moreover, due to the increasing area under cultivation, the production of barley, wheat, and sugarcane is expected to escalate, especially in developing nations. In addition, the compound has the ability to mix with herbicides and widen the weed control spectrum, which makes triazines essential for high-yield, sustainable agriculture. With the growing population driving food demand and farmers witnessing a decrease in the farming land they own, despite the overall increase in the area under cultivation, they are depending on agrochemicals. Therefore, the increasing use of the compound in agrochemicals is expected to boost the growth of the global triazine market.

In the recent years, players in the industry have engaged in facility expansions in order to stay ahead of their competitors. For instance: 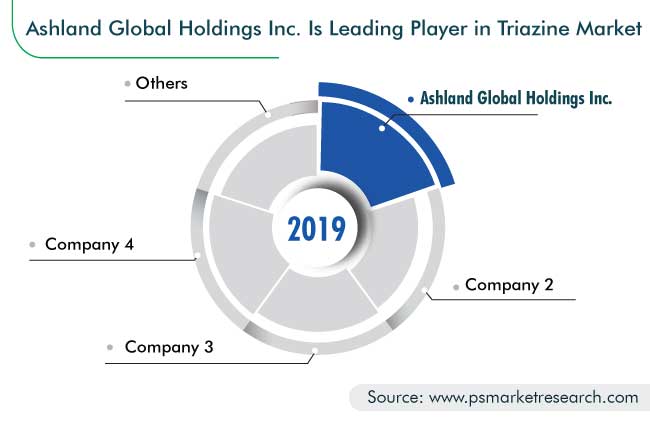 Some Key Players in Triazine Market Are:

The triazine market report offers comprehensive market segmentation analysis along with market estimation for the period 2014-2030.

Frequently Asked Questions About This Report
What is the growth forecast for the triazine market?+

How has the COVID-19 pandemic affected the triazine industry?+

The COVID-19 pandemic had a mixed effect on the triazine industry, as the demand for the chemical declined in a few sectors, but remained strong or rose in many others.

Which is the largest-selling product in the triazine market?+

MEA is the largest-selling product in the triazine market.

What is the strongest growth driver for the triazine industry?+

The key triazine industry growth driver is the rising demand for the chemical in the agrochemical, petrochemical, and medical sectors.

Which is the most-lucrative region for triazine market stakeholders?+

North America is the most-lucrative region for the investors, players, and other stakeholders in the triazine market.