In recent years, THz technology has been perceiving significant applications and advancements on the high-tech front. The technology outlook has the potential to enhance applications ranging from security checks to cancer diagnosis and is capable of easily penetrating several materials, such as biological tissue. The progress is augmented by the increasing potential payoffs of the THz regime for military, non-destructive testing, and security applications.

The usefulness of the THz technology is boosting the market and is also being driven by the growth in the aerospace and defense and homeland security sectors across all regions. Moreover, the surging penetration of the THz technology in medical and satellite communications devices, and the increasing applications of high-end THz devices in research laboratories are trending in the market. 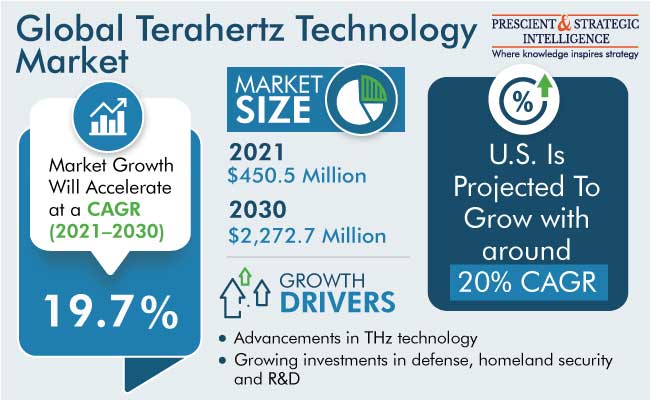 Similarly, the military application of THz radiation is increasing. Most 4th- and 5th-generation strike aircraft utilize a combination of EO/IR pod video feeds and SAR images for targeting objects on the ground. Thus, the defense and security sector has played a key part in the terahertz technology market growth.

Furthermore, countries are raising funds in the sector of homeland security to combat acts of terrorism and other threats. For instance:

Therefore, the increase in application areas and advancements in the THz technology drive the market size.

Expanding Opportunities in the Market

The backbone of the communication networking infrastructural development is a high-speed network, which can transfer a huge amount of data from one end to another at a high speed. The development of the 5G infrastructure requires high-bandwidth-oriented networking. Therefore, in the expansion of communication infrastructure, terahertz is being considered as a future technology for fast networking. Moreover, THz will also act as a key technology in future 6G wireless communications. The 6G network could satisfy the military’s growing requirements to gather, analyze, and share information rapidly to control an increasing number of automated devices.

Furthermore, researchers are working on several projects utilizing the benefits of the technology such as building and evaluating 5G-and-beyond systems with the THz technology, which opens and boosts the communication sector in newer ways. Therefore, new research will offer several opportunities to market players over the coming years. 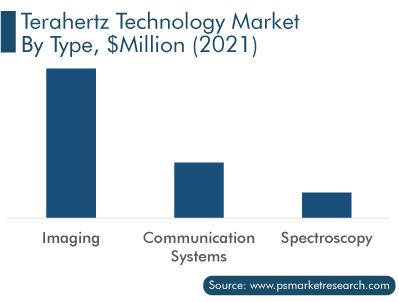 U.S. Is Principal Contributor to Market

The U.S. market is expected to grow at a compound annual growth rate of around 20% during 2021–2030. The country is a key market for terahertz technologies, majorly due to the growing investments in defense, homeland security, and R&D, and the presence of major market players. Moreover, the government’s strict regulations regarding safety and the increasing security checks, along with the growing automotive and aerospace industries, are driving the market in the country.

The evident actions by the government for the purpose of security and non-destructive testing show the increasing usage of investigating and security devices. Similarly, the surging trends for the adoption of advanced security technologies are expected to further boost the demand for terahertz technologies for security purposes in the country. Moreover, the rising developments and government initiatives in the IT and healthcare sectors for advancing THz applications augment the terahertz technology market growth. 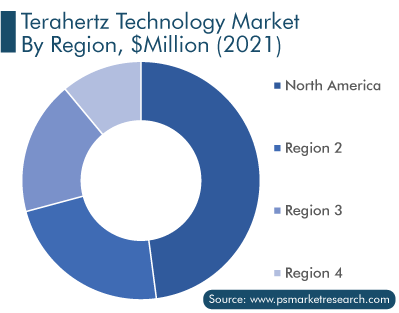 The COVID-19 pandemic created a positive impact on the use of THz imaging in healthcare systems. For example, the U.S. Customs and Border Protection agency is one of the prominent users of the technology, among more than 200 users of the technology, deploying it to secure the U.S. border. Moreover, professionals have developed a technology that detects COVID-19 variants using THz waves by the use of label-free terahertz metamaterials to discriminate the variants accurately and rapidly.

The terahertz radiations are capable of visualizing the contents of sealed packages and can provide a clear and detailed analysis of the internal structure of objects (quality control of products) and becoming an integral part of the non-destructive testing industry. Terahertz technologies' potential applications lie in protecting government buildings and other public facilities. Several kinds of research are being conducted to utilize the THz technology. For instance, nine cooperation partners of Fab Microelectronics Germany (FMD) are working together with Fraunhofer ITWM to synergistically develop terahertz technology for wireless radio transmission, non-destructive testing, spectroscopy, and non-contact inline measurement technology.

Frequently Asked Questions About This Report
What was the size of the terahertz technology market in 2021?+

What will be the growth rate of the terahertz technology market during the forecast period?+

Which is the largest application area of terahertz technology in the market?+

Defense & security is the largest application area of terahertz technology in the market.

What are the major drivers for the terahertz technology market?+

The major drivers of the terahertz technology market include the increasing applications of THz technology in communications systems, medical therapies, and defense and security solutions, and the surging R&D investments in this field.