The telecom power system market size was valued at $3,974.1 million in 2021, and it is expected to reach $7,360.2 million in 2030, propelling at a growth rate of 7.1% during 2021–2030. The growth is supported by the surging penetration of telecom towers in different regions, such as APAC and Africa, and the proliferating adoption of telecom services. Further, multiple numbers of towers have been installed incessantly to meet the requirement of the increasing number of subscribers, which, in turn, strengthens the use of power systems for these towers.

Moreover, the surging telecom networks particularly in rural areas coupled with the escalating use of hybrid power systems and awareness with respect to curbing carbon footprint from telecom power systems are the other significant factors that contribute to the growth of the market. 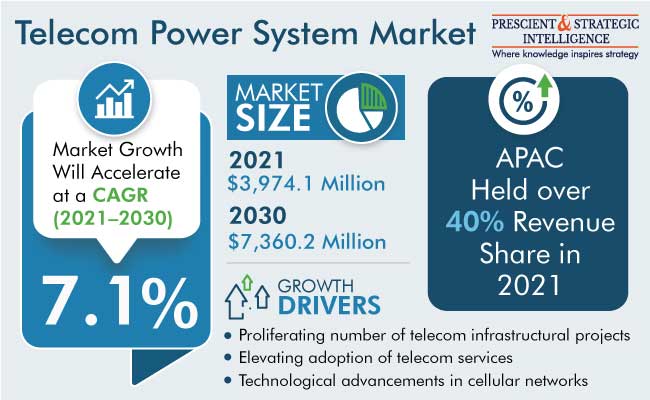 The hybrid power plant combines wind and solar power generation, exploits the full potential of renewable energy by determining the intermittency of the power generation, and offers a more dependable solution to cater to the increasing power needs. Thus, several companies are strongly focusing on the development of hybrid power plants, which, in turn, would further heighten the demand for power systems. For instance:

Generators Are Most Popular

Among components, the largest telecom power system market share, of around 30%, was held by the generators category, as they are substantially used as a standby power source to offer secure operations against power outages and inadequate power supply. Moreover, diesel is less flammable than natural gas, making it a safer fuel for generators for telecom tower backups. Further, diesel-fueled generators have longer lifespans as compared to others, since they run at lower temperatures.

As of 2021, the bad-grid category accounted for the largest market share, of more than 40%, followed by the on-grid and off-grid categories. This is primarily ascribed to its wide application in rural areas in mainly developing countries, such as India, Pakistan, Brazil, and African economies. In addition, the surging development of telecom infrastructure due to the increased investments by tower companies bolsters the use of the bad-grid category.

Among power source types, the diesel-solar category is expected to witness the fastest growth during the forecast period, advancing at a CAGR of over 8%. This can be attributed to the increasing use of hybrid energy sources in telecom towers and they tamp down the maintenance and operational costs by curtailing fuel consumption and diesel runtime. Moreover, the proliferation of hybrid project development fortifies the use of diesel-solar power sources across the globe.

Of the two technologies, the DC power systems category accounted for more than 60% market share in 2021 and is expected to maintain its lead in the coming years as well, owing to the wide applications of DC power systems in the telecom sector. DC power is not limited to frequency variation or leading power factor. Moreover, DC power can be stored, and hence, backup for telecommunication buses can be simply provided by batteries directly without any power conversion loss. There are various companies, which are specialized in manufacturing and distributing DC power solutions across the globe, such as Eaton Corporation plc, La Marche Manufacturing Company, Alpine Power Systems, and Power Solutions LLC.

In 2021, the APAC telecom power system market share was more than 40% of the global revenue, and the region is also projected to continue its industry dominance in the long run. The number of mobile subscribers has been witnessing an upward trend during the past years, which encourages telecom service providers to lay emphasis on making investments and expanding the telecommunications network. This augments the production of power systems in the region.

For instance, India has around 1.2 billion mobile connections, about 600 million smartphones, and around 700 million internet users. The country is adding around 25 million new mobile users per quarter, making it a flourishing ground to introduce digital initiatives. Further, the country has the highest mobile data consumption of around 12 GB per person per month, worldwide.

On the other hand, North America is projected to be the fastest-growing market for telecom power equipment in the coming years, owing to the strong network connectivity, 4G-LTE networks, and mobile penetration. The growing information communication technology (ICT) industry, which comprises telecommunications as well as high-tech sectors, is predictably at the core of the regional market growth. Furthermore, the U.S. is expected to register a more pronounced 5G cycle with peak smartphone growth in the coming years, which would further entice service providers to establish and ameliorate telecom infrastructure. Therefore, this factor is projected to create a positive influence on the market in the long run.

In addition, Europe also held a significant share in the market, of around 15%, in 2021. This is due to the rising adoption of cloud platforms and the increasing volume of enterprise data. Germany is one of the largest telecom markets in the region. Both the fixed network and broadband sectors are dominated by Deutsche Telekom AG, with other notable players including Vodafone GmbH, and Telefónica Germany GmbH & Co. OHG. Thus, due to the presence of these giants, the demand for telecom power systems is increasing in the country. 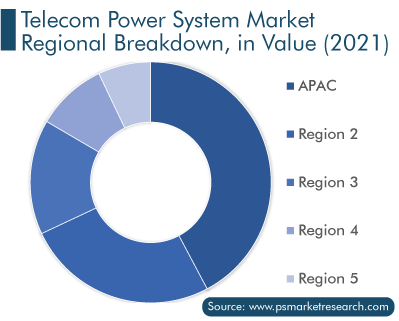 In this new era of digitization, companies are focusing on adopting new technologies, such as AI, IoT, and ML, for the enhancement of their businesses, which has resulted in the development of cloud transformation telecom consulting. In 2020, leading telecom companies adopted the new-generation technologies to quicken up network expansion and reduce operational costs. Further, the open radio access network (OpenRAN) allows network operators to deploy 4G and 5G networks by combining vendor-neutral hardware and software.

Moreover, the telecom sector continued to make progress in augmenting its network capacity with additional fiber and wireless deployments to meet the constant demand for higher-speed networks. The potential for a more competitive broadband market, along with the booming interest in multi-access edge computing and private cellular networks, and the rising need to reanalyze cybersecurity and risk management in the 5G era are the significant factors that boost the telecom power system market growth in this sector.

The market is highly competitive, with the presence of various key players. The players have been strongly focusing on product launches to diversify their product portfolios and earn a competitive edge. For instance:

In March 2022, Huawei Technologies Co. Ltd. unveiled an all-new microwave solution for 50 Gbps E-band, with the aim of meeting ultra-high-bandwidth requirements in dense urban areas. Moreover, the company introduced a simplified SuperLink solution for suburban areas, accomplishing 10 Gbps capacity across over 40 km, as well as an ECOwave solution that is designed to save network energy on all bands, leading to scale up 5G deployment.

Based on Power Source

Frequently Asked Questions About This Report
What was the size of the telecom power system market in 2021?+

What will be the growth rate of the telecom power system market during the forecast period?+

Which is the largest power source in the telecom power system market?+

Diesel-Battery is the largest power source in the telecom power system market.

What are the major drivers for the telecom power system market?+

The major drivers of the telecom power system market include the proliferating telecom infrastructural projects, elevating adoption of telecom services, and technological advancements in cellular networks.