The global sterilization technology market was valued at $9,313.7 million in 2021, and the market size is predicted to reach $17,313.7 million by 2030, advancing at a CAGR of 7.1% during 2021–2030. The market is driven by the rising incidence of HAIs, increasing number of surgeries, and growing demand for sterile pharmaceutical products.

In China, the market has been experiencing growth due to its booming pharmaceutical industry, increasing prevalence of chronic diseases, aging population, increasing levels of air pollution, and favorable government regulations. According to the ITA, China is the second-largest pharmaceutical market in the world, and it is forecast to grow further. The production of drugs and medical devices requires a completely sterile environment. The strict regulations imposed by the China Food and Drug Administration (CFDA) make it difficult for the manufacturers to launch any drug in the market without proper caution being observed, thus increasing the demand for sterilization technology. 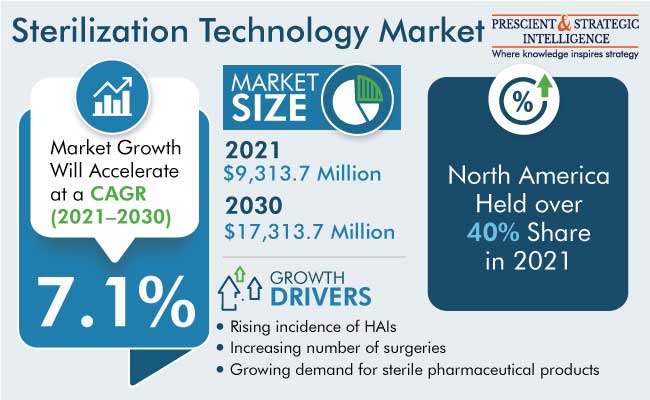 Complex medical devices are difficult to clean and sterilize, requiring skilled professionals to perform the procedure without hampering their quality and the chemical and physical properties of the raw materials, such as plastics and rubber. With limited budgets and the high complexity of these medical devices, hospitals prefer to outsource these operations to third parties, who carry out the sterilization either on-site and or at their own facilities.

Sterilization equipment held the largest share, of around 55%, in 2021. This was mainly due to the increasing incidence of HAIs, growing number of hospitals, and booming pharmaceutical, biotechnology, and medical device industries. A variety of equipment are available to provide various types of sterilization for a range of medical equipment, based on heat, steam, low temperature, radiation, and other forms of energy. Additionally, the leading position of the category is attributable to the rising number of surgeries, presence of a large number of semiconductor companies, and growing aging population. Further, many companies are showing higher regulatory compliance to medical safety standards, to offer safe and efficient healthcare. 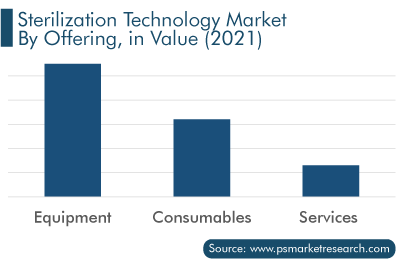 Pharmaceutical and biotechnology companies held the largest revenue share, approximately 30%, in 2021. The growing number of pharmaceutical and biotechnology companies and their increasing production are driving the growth of the sterilization technology market. Due to the advances in technology, the pharmaceutical industry has entered an exciting new era in medicine development. With groundbreaking cell and gene therapies becoming more widely accessible, research methodologies are changing, and there are many intriguing prospects in the near future. Medical advancement both inspires and propels the inventive pharmaceutical sector. It seeks to translate fundamental research into cutting-edge therapies that are widely accessible to patients.

HAIs, or infections acquired in healthcare settings, such as hospitals, ambulatory service centers, and clinics, are the most-frequent adverse events in healthcare delivery, globally. The increasing incidence of such infections has been leading to significant mortality and financial losses for the overall healthcare system. Out of every 100 hospitalized patients at a given time, around 10 in developing countries and 7 in developed countries are likely to acquire at least one such infection. Additionally, the burden of these infections is much higher in low-to-middle-income countries than high-income countries.

This rising incidence of nosocomial infections is expected to increase the need for equipment sterilization & processing in hospitals since a high incidence of infection is associated with the use of invasive equipment, such as intravenous lines and urinary catheters.

North America held the largest share, over 40%, in 2021. The growth in the North American sterilization technology market is led by the expanding R&D activities of pharmaceutical companies, increasing healthcare expenditure, proliferating geriatric population, booming number of hospitals, and escalating number of nosocomial infections cases. In addition, due to the increasing prevalence of chronic diseases, healthcare providers in the region are striving to provide sterile environments to patients, to avoid any further risk of infection.

The CDC states that 7 of the top 10 causes of death are chronic diseases. Two of these—heart diseases and cancer—together account for over 45% of all the deaths in the U.S. In addition, more than one in three adults suffers from at least one cardiovascular disease, and it is predicted that around 45% of the U.S. adult population will have some form of cardiovascular disease by 2030.

Moreover, the geriatric population is more prone to infections, and healthcare providers are trying to make sure these patients do not contract any infection during their stay in the hospital, which is further increasing the demand for sterile products. Furthermore, the healthcare expenditure in North America is expanding at a significant pace, thus propelling research and development investment. Much of this investment is accounted for by pharmaceutical and biotechnology companies, federal agencies, research institutions, voluntary health associations, professional societies, and state and local governments. 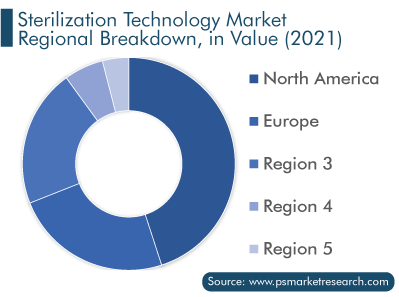 The APAC region will experience the highest growth rate, over 9%, during the forecast period, due to the increasing aging population, rising healthcare expenditure, growing pharmaceutical industry, and high pollution levels. People aged 65 years and above are estimated to account for approximately 20% of the region’s population by 2050. The elderly population is more prone to infections owing to its weak immune system, and its wounds heal slowly, due to its reduced regenerative capabilities. This has provoked healthcare providers to take more precautions to provide a sterile environment to the elderly, which is eventually driving the growth of the market in the region.

In addition, the growing medical tourism sector in emerging economies has been continuously improving the healthcare infrastructure, thereby increasing the use of advanced treatments and devices. Countries such as Malaysia, Singapore, India, and Thailand have emerged as lucrative destinations for medical tourism. The growing healthcare infrastructure in APAC is, in turn, creating huge revenue generation opportunities for medical device manufacturers and, ultimately, for entities that reprocess, repair, and sterilize such equipment in the region.

The report offers a comprehensive market segmentation analysis along with market estimation for the period 2017-2030.

Frequently Asked Questions About This Report
What is the value of the global sterilization technology market?+

What are the key factors driving the sterilization technology industry?+

The sterilization technology industry is driven the growing count of HAI-related deaths, especially of neonates.

Which region has the largest sterilization technology market share?+

The market for sterilization technology is dominated by North America.

Who is the largest end user in the sterilization technology industry?+

Which offering is the most demanded in the sterilization technology market?+

The market for sterilization technology witnesses the highest sale of equipment.