The South Korean micromobility market generated $120.3 million revenue in 2020, and it is predicted to show a substantial growth rate during the forecast period (2021–2030). The key factors behind the growth of the market are the proliferating focus on reducing traffic congestion in urban areas, need for decreasing air pollution and transportation cost, and increasing demand for efficient first- and last-mile connectivity.

South Korea has suffered from several waves of the COVID-19 pandemic; however, its public health system has been able to combat them effectively by limiting their spread and duration. This was managed through the targeted suspension of public gatherings, closure of public entertainment venues and schools, restrictions on international and domestic travel, and limited use of public transport. However, the pandemic has positively affected the South Korean micromobility market as with fewer people choosing crowded public transit, the demand for alternate means of transport is growing. Micromobility has emerged as one of the most-efficient forms of transportation, with an increasing number of people in the country using it. 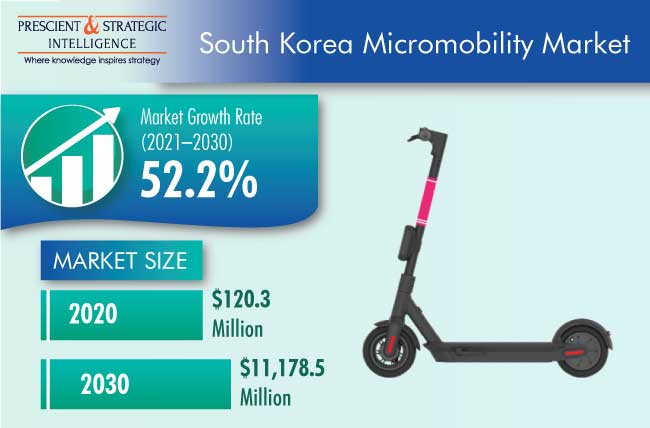 The largest share in the South Korean micromobility market was held by the e-scooters category in 2020, on the basis of vehicle type. This can be ascribed to the fact that e-scooter sharing services have the potential to make a significant contribution to tackling the problem of last- and first-mile commuting, where the existing public transit choices are not as cost-effective. In addition, e-scooters are affordable and accessible, and they are environmentally beneficial since they do not use gasoline or other petroleum-based fuels. These scooters are intended to fit in a tiny space, and they can be used to access public transportation, such as buses and trains.

The dockless system dominated the South Korean micromobility market in 2020, based on sharing system, and it is expected to witness the faster growth in the forecast period. It will mostly be due to an increase in the number of companies opting for the dockless concept over the docked system since the former needs less capital and has lower operational costs. Furthermore, users prefer dockless sharing to docked sharing because of its cost-effectiveness and convenient features, such as greater parking flexibility.

Due to the growing need for last-mile connectivity, particularly in metropolitan areas, the number of micromobility companies has increased in recent years. Many well-known venture investors and automakers have backed startups in the micromobility space, which, in turn, has helped service providers expand their operations. Some of the leading startups that have raised heavy funding are Lime, Wind Mobility, and Beam Mobility, while some of the leading venture capitalists that have invested in micromobility startups are Sequoia Capital, SoftBank Vision Fund, and DST Global. 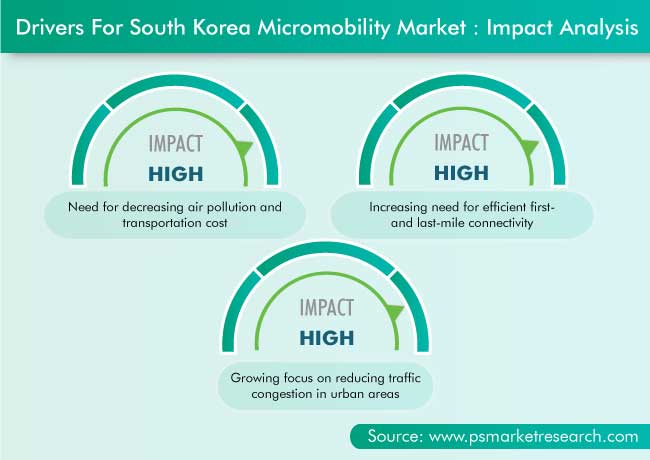 The micromobility ecosystem has grown at an exponential rate owing to the wide availability, low cost, and ease of use of the services. Environmental pollution is presently a major worldwide concern, and South Korea remains one of the most-polluted countries in the world. A study conducted in February 2017 claimed that South Korea had the second-worst air quality of all the advanced economies that are members of the Organisation for Economic Co-operation and Development (OECD). Sustainable energy and the rising use of shared mobility services can contribute to a substantial reduction in the daily fuel consumption, which is driving the usage of micromobility in the country.

Market Players Involved in Expanding Their Services across Cities

In recent years, players in the micromobility market of South Korea have involved themselves in service expansion in order to attain a significant position. For instance:

Frequently Asked Questions About This Report
What is the South Korean micromobility market forecast till 2030?+

How did the COVID-19 pandemic affect the South Korean micromobility industry?+

Why are dockless systems favored in the South Korean micromobility market?+

Dockless sharing systems are more popular in the micromobility market of South Korea because they are cost-effective for service providers and convenient for users.

What is the major South Korean micromobility industry driver?+

The major drivers for the South Korean micromobility industry are the worsening air pollution and traffic congestion and inefficient first- and last-mile transport options.

The competitive landscape of the micromobility market of South Korea is characterized by partnerships and service expansions.