The South African DG set market size generated an estimated revenue of $113,289.3 thousand in 2021, and the market size will advance at a CAGR of 3.9% during 2021–2030. The high need for medium- and high-power DG sets from the commercial sector and the growth in the manufacturing and construction industries are driving the market growth. The growth in these industries is due to the macroeconomic development, increase in capital expenditure (CAPEX) by public and private players, and government reforms and incentives to encourage foreign and domestic investments in various industries.

Major areas supporting South Africa's economy include well-developed legal, financial, communications, and transport sectors, as well as an open trade policy and a relatively strong domestic market. Moreover, efforts of the government toward the construction of healthcare infrastructure and health & wellness centers, power industry rebound, and establishment of business hubs and industries are driving the demand for an uninterrupted power supply. 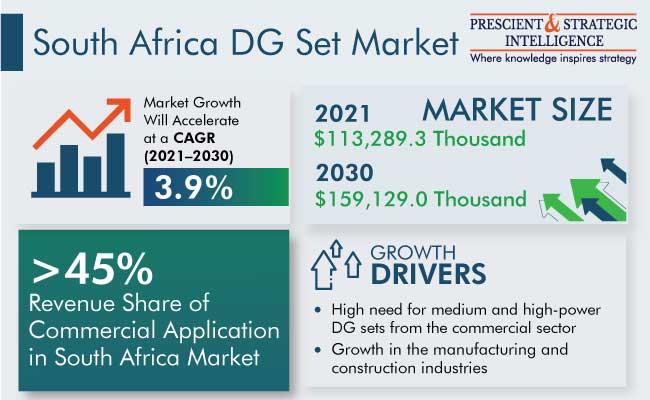 Moreover, hybrid generators are becoming increasingly popular in the country because they have lower operating costs and are less reliant on a single fuel. Furthermore, the frequent power outages in the country have resulted in crippling traffic delays, as well as reduced mining activities and lower factory outputs. DG sets play an important role in these industries by ensuring continuous power supply for smooth operations, especially in remote locations with no or unreliable grid connectivity. The vigorous growth of the abovementioned sectors is, therefore, likely to provide lucrative opportunities for the development of the DG set market in South Africa.

In 2021, the 15–75 kVA category accounted for the largest share, of around 40%, in the DG set market. This is primarily due to the surging use of 15–75 kVA DG sets in residential societies and commercial areas, including telecom towers, small commercial offices, and retail outlets. Moreover, significant loss of energy and improper distribution channel often cause power failure in the country. In order to counter the power cuts, households, retail shops, and commercial offices are using diesel gensets with a power rating of 15–75 kVA. 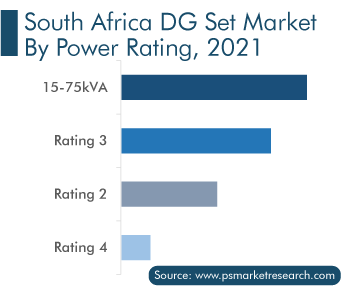 The DG set industry will advance in South Africa in the coming years, owing to the rising demand for electricity, due to government initiatives such as the National Transport Master Plan 2050, Vision 2025, and National Development Plan (NDP) 2030. The NDP is aimed at reducing poverty and minimizing inequality by 2030. Moreover, the country performs well in terms of trade facilitation and logistics, and transportation infrastructure.

In 2021, in terms of sales, the largest share in the South African DG set market was held by the commercial category, of more than 46%. This is mainly attributed to the high-volume demand for DG sets in this sector, due to the rapid development of retail outlets, transportation (rail and road) infrastructures, hospitals, malls, restaurants, and telecom towers, in the country. 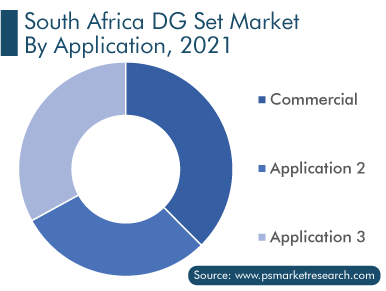 The major trend observed in the market is that key companies have been involved in partnerships and collaborations, in order to stay ahead of their competitors. For instance:

Frequently Asked Questions About This Report
What will be the growth rate of the South African DG set market?+

Which is the largest application category in the market?+

Commercial is the largest application category in the South African DG set market.

What are the key drivers for the market?+

The major South African DG set market drivers include the high need for medium- and high-power DG sets from the commercial sector and the growth in the manufacturing and construction industries.

Who are the top players in the South African DG set market?+