The global sorbic acid market value will increase from $347,661.0 thousand in 2019 at a CAGR of 4.7% during the forecast period (2020–2030). This is majorly attributed due to the presence of well-established food & beverages and pharmaceutical industries in Western economies, along with the growing per capita food & beverages consumption in emerging economies, such as India, China, and Brazil. Sorbic acid acts as a preservative for preventing food from contamination or spoilage, which is why the government support for this industry is providing a lucrative growth opportunity to market players. 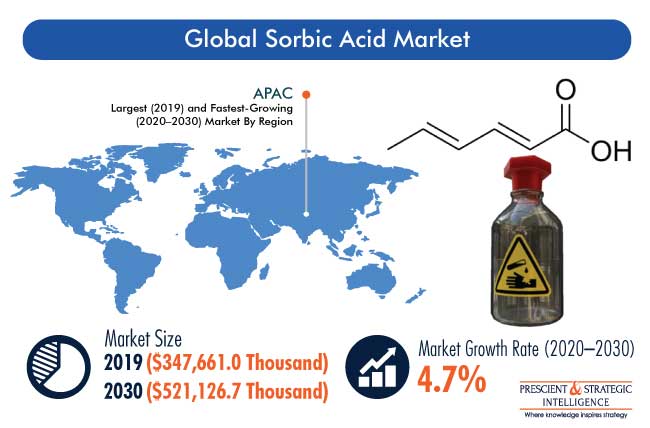 Due to the coronavirus outbreak, the global supply chain was disrupted, which has also impacted the food supply chain, which is one of the most integral aspects of the economy. The impact was observed from the field to the consumer, including in the movement restrictions on workers, changes in consumer demand, closure of food-producing facilities, and changes in food trade policies. The pharmaceutical and food & beverages industries have been impacted due to the pandemic, thus driving down the demand for sorbic acid to some extent.

In 2019, the powdered category accounted for the larger market size in the sorbic acid industry, on the basis of form. This is attributed to the simpler manufacturing process of the powdered compound when compared to the encapsulated form, which is why companies in the market prefer producing sorbic acid in the powdered form. Furthermore, powdered sorbic acid can be added to any type of processed food or beverages, which results in its extensive usage in the food & beverages industry.

The food & beverages category, based on application, is projected to witness the fastest growth in the sorbic acid market during the forecast period. Since sorbic acid has low toxicity and can inhibit the growth of yeast and bacteria, it is widely used in the food & beverages industry. Furthermore, conflicting opinions on the usage of other food preservatives such as sodium benzoate are driving the demand for substitutes such as sorbic acid. As a result, this chemical is widely used in the production of noodles, dairy, seafood, and meat products.

During the historical period (2014–2019), APAC held the largest share, and it is also expected to be the fastest-growing sorbic acid market during the forecast period. The vast food & beverages industry in Japan, South Korea, and Australia and robust growth in the pharmaceutical industry in emerging economies, such as China and India, are playing a vital role in propelling the demand for sorbic acid in the region. Essentially, the rising disposable income of regional inhabitants is leading to the increasing consumption of processed food products, thereby driving the usage of sorbic acid as a preservative.

The major trend being witnessed in the global sorbic acid market is the shifting of the production base of sorbic acid manufacturers from Western countries to China. Driven by the strong economic growth and market opportunities, the focus of chemical companies is shifting to China. Additionally, due to the stringent environmental norms in other regions, particularly Europe and North America, various companies are moving their manufacturing base to APAC. Moreover, Europe and North America are characterized by high labor costs, expensive raw material, and small profit margins, which is impelling market players to shift their production base to China.

Sorbic acid inhibits the growth of mold, which may contaminate and spoil the food, which is why this chemical is widely consumed in the food & beverages industry. Additionally, sorbic acid does not affect the final product's flavor, owing to which it is vastly used in food items, most commonly wines, cheeses, baked products, fresh produce, and refrigerated meats. With the increase in the consumption of such food products worldwide, the demand for sorbic acid, in order to prevent the growth of fungi, has witnessed a rise, and the trend is likely to continue in the coming years.

Sorbic acid is widely used as an antimicrobial preservative in the pharmaceutical industry. Owing to this property, it is extensively used for preserving liquid and solid pharmaceutical formulations. This allows them to be opened and closed multiple times until their expiry, as every interaction with the outer environment may otherwise increase the product contamination risk. Since APAC is a lucrative market for pharmaceutical products and its healthcare expenditure, which is projected to grow by 7% annually, to reach $2.4 trillion by 2022, already surpassing that of the U.S. and Europe in 2019, the demand for sorbic acid is expected to witness a sharp rise here. Moreover, as per the India Brand Equity Foundation, India meets almost 50% of the world’s demand for vaccines and is home to over 10,500 pharmaceutical factories. 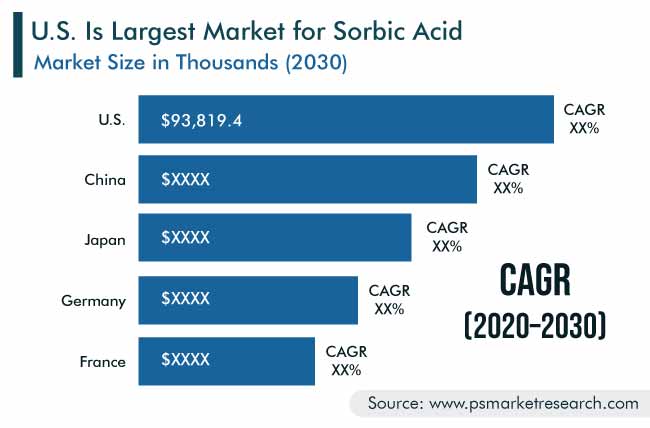 Frequently Asked Questions About This Report
How big is the sorbic acid market?+

Which is the largest application area in the sorbic acid industry?+

Food & beverages is the largest application area in the sorbic acid industry.

What is the regional scenario in the sorbic acid market?+

APAC is the largest and fastest-growing sorbic acid market.

Why are sorbic acid industry players shifting their production base to China?+

Players in the sorbic acid industry are producing in China due to the less-stringent environmental regulations, cheap labor and raw materials, economic growth, and lucrative market opportunities here.

How is the competitive landscape of the sorbic acid market?+

The highly consolidated sorbic acid market is dominated by companies from China.