In 2015, the global solar control glass market was estimated to have a value of $4,198.0 million, which is expected to grow at a CAGR of 9.2% during the forecast period (2016-2022). Some of the major factors driving the market are growing construction of residential and non-residential buildings, immense growth in the building-integrated photovoltaic (BIPV) market and increased government initiatives and tax benefits provided by governments across developing nations.

Solar control glass come with a coating that directly reflects a major portion of sunlight, reduces the heat entering into a building, hence, making interiors and indoor spaces brighter and cooler. With the increase in usage of glass in modern buildings have created a demand for solar control glass from residential and automotive markets. 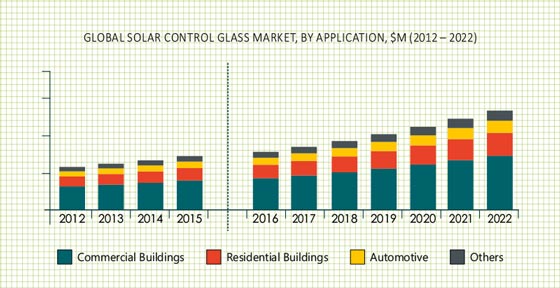 Subsidies by several governments, such as investment tax credit, FIT programs, and other tax benefit schemes are some of the key drivers of the market. Supportive government policies such as tax relief to construction manufacturers and introduction of 100% FDI for infrastructure development in India are likely to boost the market in developing nations like India. Moreover, in 2014, Development Bank for BRICS was established for promotion of infrastructure improvement which aims to provide funding for infrastructure to BRICS nations. Additionally, technological developments and increasing awareness of climatic changes, have led the manufacturers to develop technologically advanced solar control glass in order to tap untouched markets. Therefore, such factors are expected to serve as opportunities for the market in the coming years.

Untapped markets such as the developing nations in Asia Pacific serve as a major opportunity for the global solar control glass market. Although, the market has its base in Europe and United States, it is still in its early years. With the increase in construction activities in these countries, the demand for solar control glass is expected to increase, hence providing further growth opportunities.

Geographically, Europe dominated the solar control glass market in 2015. This can be attributed to the environmental policies regarding curbing of harmful emissions and increasing residential and commercial building construction.