The global solar control films market size was $728.4 million in 2021, which is projected to reach $1,283.8 million by 2030, growing at a CAGR of 6.5% during 2021–2030. This can be ascribed to the rising awareness of the advantages of solar control films over sun-reflective glass, increasing real estate development rate, and surging focus on the reduction of energy costs and the carbon footprint.

The solar control film is a thin laminate or film installed on window glass to reduce heat transfer, by reflecting back the visible light, as well as infrared and ultraviolet rays entering through the window. They work on the principles of radiation and convection, to reduce heat flow. These films are generally metalized or dyed and have the ability to reject back the inbound solar radiation through the window glass to the exterior environment. These materials can reduce energy transmission by as much as 80% when compared to regular window films, thereby offering effective solutions for controlling the temperature during the summer. 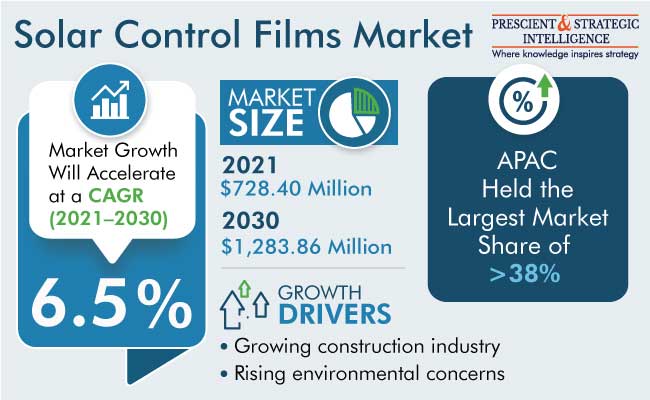 Based on type, vacuum variants accounted for the largest revenue share, of more than 40%, in 2021, and they are expected to grow at a significant CAGR in the next few years. This growth is attributed to rise in the construction activity and growth in the usage in automobiles, as these films reflect most of the solar radiation and keep the interior cooler than other films. The metal in these films also blocks the harmful UV rays and reflects the sun's heat. Various methods, such as evaporation, sputtering, and beam evaporation, are used to metalize these sheets. In the vacuum coating process, sub-atmospheric pressure and a molecular or atomic condensable source of vapor are created using a vacuum, to deposit thin films and castings.

Based on application, the construction industry held the largest revenue share, of more than 52%, in 2021, due to the growing usage of these materials in commercial and residential buildings. The rapid infrastructure growth in developing countries, such as China, India, Brazil, Malaysia, and South Africa, has positively affected the demand for solar control films. Conventionally, the real estate sector has relied on solar control window glass for reducing solar radiation. However, solar control films are replacing solar control window glass effortlessly, owing to the former’s comparatively lower cost, higher solar reduction rate, greater safety, and stronger security.

The construction industry offers growth opportunities to the solar control films market as it is using more glass than ever before. Thus, since past few years, there has been an increase in the demand for solar control films from the construction industry owing to the huge investments in residential and commercial buildings, such as malls, housing societies, corporate parks, and office buildings. 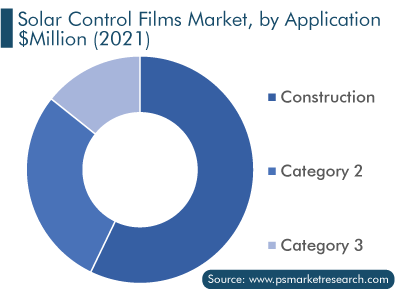 The need for the reduction of energy costs and carbon footprint is one of the major factors that drives the growth of the market, as the rising energy costs and electricity use are major concerns across the world. Solar control films provide options for controlling sunlight to some amount, thus minimizing heat transfer. This reduces the strain on cooling or heating systems, thus lowering energy costs and carbon emissions. The costs of cooling and heating a structure are significant; solar control films reduce power use, which reduces the carbon footprint of the building.

Solar radiation is the heat transferred through windows and stored inside houses, commercial buildings, automobiles, and ships. Due to the rising temperatures, AC and chiller sales continue to boom, which increases the power consumption and energy bills of buildings. To reduce heat transfer from outside, sun control films manufactured from plastic are used on the glass of the windows. Similarly, in winters, these materials help in reducing heat loss, by reflecting up to 35% of the heat back into the room.

Asia-Pacific accounted for the largest revenue share, of more than 38%, in 2021, and it is predicted to grow at a significant CAGR over the forecast period. This is primarily attributed to the rising construction investment and the existence of warm weather throughout the year in most parts of the region. Furthermore, the region is considered among the fastest-growing, economically, due to the presence of nations including China and India.

North America is the second-largest market owing to the growing automotive industry in the continent. Moreover, the regional construction industry is booming on account of the favorable policies for lenders and the recovery of economy, which have led to a resurgence in the demand for residential spaces. 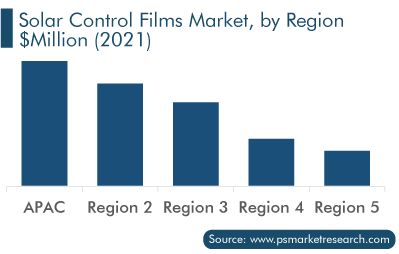 Frequently Asked Questions About This Report
How big is the solar control films market?+

What is the solar control films industry growth forecast?+

What segments are covered in the solar control films market report?+

The market for solar control films is segmented by type, application, and region.

What are the key driving factors for the solar control films industry?+

The solar control films industry is driven by the growing construction industry and rising environmental concerns.

What is the country-wise analysis of the solar control films market?+

China, India, and the U.S. are the biggest countries in the market for solar control films.