The global smart light fixture and control market size in 2021 was $52,047 million, and it is expected to advance at a CAGR of 12.6% during 2021–2030, to reach $152,029 million by 2030. This is credited to the lowering average selling price of LED bulbs owing to the reducing material costs and increasing production efficiency. Moreover, the looming issue of energy crisis is impelling governments and individuals to switch to smart lights, which can bring about substantial reductions in electricity consumption.

The industry has already advanced significantly in developed countries, and it is predicted to expand in developing countries throughout the forecasted period as a result of the regulatory actions of governments and rising customer interest in decreasing energy use. The integration of intelligent lighting technologies and voice control features in fixtures is creating sufficient prospects for the future growth.

The presence of multiple international corporations makes the sector competitive. The favorable business policies implemented by governments in developing countries and emergence of new venture capital firms are resulting in the availability of creative solutions. Furthermore, the tremendous breakthroughs in the semiconductor technology are supporting the industry in growing. Additionally, the increasing use of LEDs in place of traditional incandescent lights has expanded the opportunities for manufacturers. Thus, the players have been widening their product portfolios by inventing new fixtures and acquiring similar existing companies, to meet the rising demand. 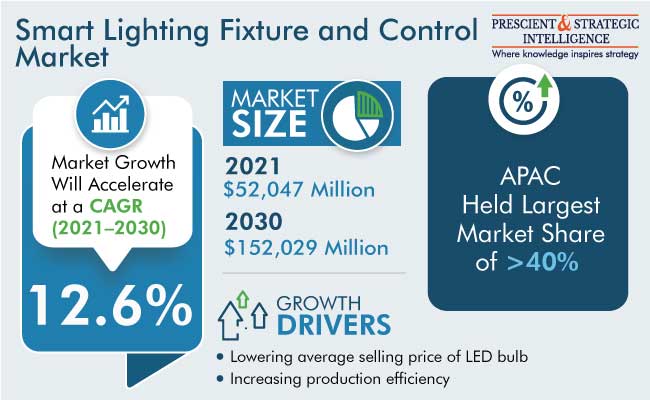 LED lights are predicted to lead the smart light fixture market throughout the forecast period owing to the numerous benefits of this technology, such as higher illumination efficiency than traditional ones, and its lowering costs. Additionally, LEDs are energy-efficient, which significantly cuts the carbon dioxide emissions from power plants. The costs of such products are falling as a result of decreasing LED production costs.

Moreover, the government rules mandating the phaseout of traditional bulbs and lamps are increasing the LED lighting market growth potential. The increasing LED fixture penetration, product development, and integration of intelligent technology via IoT are driving the growth.

A network of several lighting fixtures connected for the purpose of controlling smart systems is the basis for the smart light control market. The industry is expanding as a result of the escalating pace of technological development and constant evolution in smart controls. With the use of standardized protocols and distributed control systems, controllers offer sophisticated lighting functionality and enhance performance, customer value, and energy efficiency.

In addition, the rising energy management awareness has fueled the adoption of smart lighting controls globally. The cost of installation would reduce in the future with the development of inexpensive sensors and the falling cost of LEDs. The adoption of these products has increased significantly as a result of the falling LED unit costs and technological developments that improve their energy efficiency. Additionally, the wide range of LEDs available via both online and offline channels increases their sales, which opens up a number of potential opportunities for the players.

The offline channel category accounted for the larger share in 2021 because installation instructions for light fixtures are provided in detail by the sales professionals, which aids in selecting high-quality products.

The online channel is projected to expand at the higher CAGR during the forecast period due to the abundance of product offers and expansion of the e-commerce sector in nations including the U.S., Germany, the U.K., China, and Japan. The sales of lighting fixtures on e-commerce websites are also set to increase due to the accessibility of a wide range of items and the growing use of smartphones, tablets, PCs, and laptops.

The commercial application category accounted for the largest share, of more than 46%, in 2021. This is credited to the growing popularity of smart outdoor lighting at malls, workplaces, hospitals, and retail stores, owing to their numerous benefits. Furthermore, the demand for commercial lighting fixtures is expanding due to the ongoing and planned smart city development initiatives and government support for energy-efficient products.

Additionally, the usage of HIDs and LEDs in commercial applications is driven by the technologies' many benefits, including lower maintenance costs for lighting in difficult-to-reach areas, where replacement prices are higher than for lighting in locations closer to ground level.

Over the projection period, the residential application category is predicted to grow. Apartments, villas, houses, and other residential settings can all benefit from the personalized lighting provided by smart lighting fixtures. Due to the widespread use of LEDs instead of traditional bulbs for home décor, the residential sector will grow. The demand for these fixtures in smart home projects is also being fueled by a growing trend of advanced capabilities, such as comfort dimming and interoperability with smart devices. 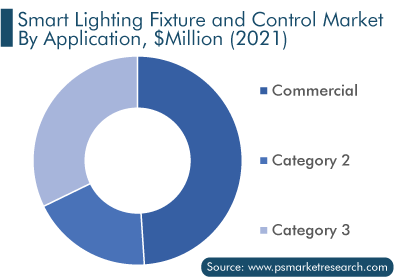 APAC accounted for the largest share, of more than 40%, in 2021 because governments in emerging economies are supporting the use of energy-efficient lights. Additionally, in order to draw customers, players are investing heavily in malls, hospitals, salons, schools, and other public spaces. The growing popularity of smart cities, likewise, drives the demand for energy-saving infrastructure, such as LED lights. Furthermore, people's lives are changing as their disposable incomes rise, which influences their move toward high-tech systems, thus propelling the industry in the APAC region.

North America also generated significant revenue in 2021, with the larger share in the region held by the U.S., driven by the increasing demand for wireless lighting fixtures. The benefits associated with these products include long-distance control, programming flexibility, energy efficiency, and extended lifespan, thus leading corporations in North America to create wireless lighting fixtures.

Additionally, the increasing use of digital workplaces for productive, economical, and adaptable working environments is set to fuel the European market. Further, owing to the rising energy saving awareness and the execution of numerous government initiatives, the revenue contribution of the European market has grown significantly in recent years. Other drivers for the smart light fixture and control market growth in Europe are the high disposable income and an increase in the deployment of intuitive solutions in the residential, commercial, and public sectors.

The MEA market is projected to develop steadily throughout the projection period too, owing to the government investment in energy-efficient products and the expanding building sector. Additionally, LATAM will expand at a moderate rate, aided by regional light manufacturing companies' competitive pricing, consistent quality, and embrace of advanced technology. 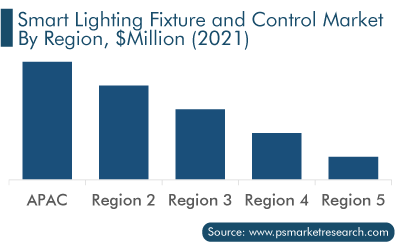 Based on Lighting Type

Frequently Asked Questions About This Report
How big is the smart lighting fixture and control market?+

In 2021, the market for smart lighting fixtures and controls valued $52,047 million.

What is the smart lighting fixture and control industry growth potential?+

What are the opportunities for the smart lighting fixture and control market?+

Players in the market for smart lighting fixtures and controls can leverage the opportunities generated by the coming together of the lighting and semiconductor industries.

Which is the largest lighting type in the smart lighting fixture and control industry?+

Which is the key region for smart lighting fixture and control market players?+

APAC is the key market for smart lighting fixtures and controls.