The global SLAM technology market generated an estimated revenue of $157.5 million in 2021, and it is expected to grow at a CAGR of 42.2% during 2021–2030. The key factors responsible for the growth of the market include the emergence of autonomous vehicles, increasing number of augmented reality (AR) applications, and booming adoption of unmanned aerial vehicles (UAVs).

The COVID-19 pandemic had a negative impact on the simultaneous localization and mapping technology market as the manufacturing of SLAM-based robots and UAVs halted for a few months as per the guidelines issued by several governments. However, the market is now witnessing growth with companies across industries reinvesting in UAVs and industrial robots to boost productivity and efficiency. 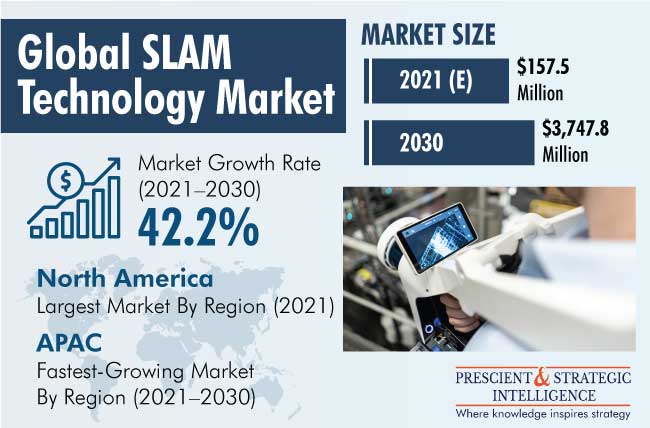 The 2D category accounted for the larger share in the market in 2021, based on offering. The usage of the 2D technology for location mapping in industrial and residential robots is increasing as it is based on red–green–blue-depth (RGB-D) mapping, which enables robots to use RGB and depth data from Kinect sensors for efficient location mapping.

The extended Kalman filter (EKF) category held the largest share in the market in 2021, based on type. This is majorly attributed to the extensive use of EKF over other algorithms as it exhibits consistent behavior in terms of state variables over an extended period. Moreover, EKF has a lower algorithm complexity than others, which is further driving its adoption.

The UAV category is projected to record the fastest growth during the forecast period (2022–2030), based on application. This can be ascribed to the increasing use of UAVs across all industries. SLAM technology is required in UAVs for various purposes, including location mapping, reconnaissance, surveillance, and intruder detection.

The military category is projected to witness the fastest growth during the forecast period, based on end user. This can be attributed to the strong need for reducing the human presence in hazardous locations and increasing the safety of soldiers.

Geographically, the APAC market is expected to register the fastest growth during the forecast period. Countries such as China and India are witnessing a substantial increase in the usage of robots owing to the rapid economic growth and expansion of manufacturing facilities. Additionally, the growing IT spending and rising adoption of drones by the automotive and manufacturing industries are fueling the market growth in the region. 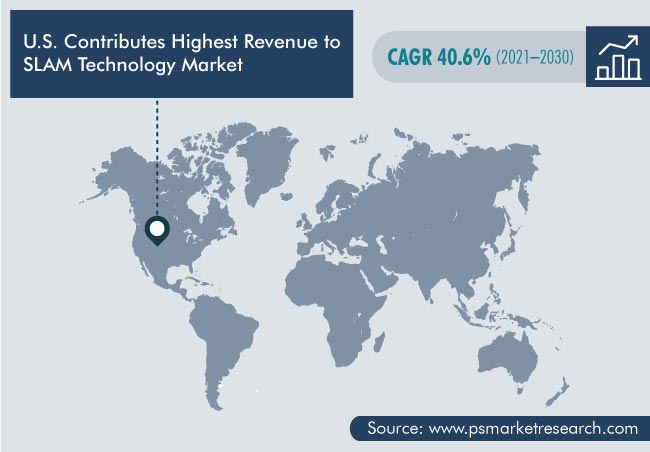 Advancement in visual SLAM is a key trend in the global SLAM technology market. Visual SLAM is quickly becoming an important development in embedded vision, with several applications. It is a specific type of SLAM system that leverages 3D vision to perform location and mapping functions. With the significant improvements in the computer processing speed and the availability of low-cost sensors, such as cameras and laser rangefinders, this technology is being used in a wide range of applications from AR to field robots.

The SLAM technology market is competitive due to the presence of several key players. In recent years, they have been involved in collaborations and acquisitions in order to attain a significant position. For instance:

Frequently Asked Questions About This Report
What is the forecast for the SLAM technology market 2030 revenue?+

Which type is preferred in the SLAM technology industry?+

Based on type, EKF dominates the SLAM technology industry.

Which is the most-lucrative region for SLAM technology market investors?+

From the point of investments, APAC is the most-lucrative region in the market for SLAM technology.

What is the strongest SLAM technology industry driver?+

The SLAM technology industry is being primarily driven by the proliferation of autonomous vehicles and UAVs.

What are SLAM technology market players doing for competitive edge?+

Players in the market for SLAM technology are engaging in mergers and acquisitions to gain a competitive advantage.