The global radiation hardened electronics market accounted for revenue of $1,539.1 million in 2021, and it is set to increase to $2,104.2 million by 2030, advancing at a CAGR of 3.5% during 2021–2030. The extensive demand for radiation‐hardened components for aircraft, medical devices, and nuclear power plants is driving the market.

APAC held the third-largest market share in 2021, and it is also expected to witness the fastest growth during the forecast period. This is due to the rising focus of India, South Korea, and many other developing countries on sufficing their rising power demand through nuclear power plants. As per a government source, India produced around 6,700 MW of nuclear energy, generated 755 billion units of electricity, and saved around 600 million tons of CO2 emissions in 2021. 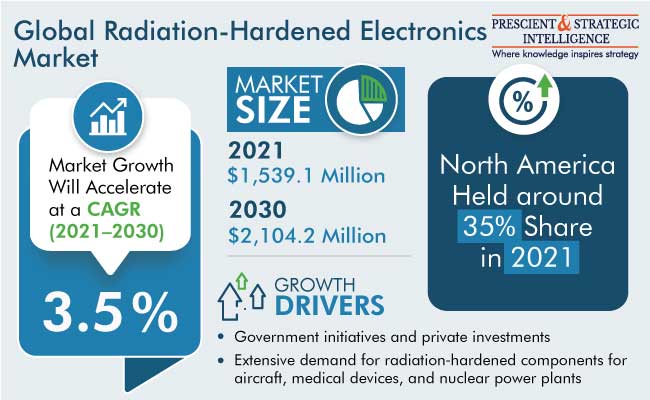 Moreover, the space sector is thriving owing to government initiatives and the investments by entrepreneurs operating in this industry, globally. For instance, as per the Satellite Industry Association (SIA), the global aerospace economy, which consists of the revenue generated from satellite launches, manufacturing, associated services, and ground equipment sales, stood at around $350 billion in 2020.

The power management category held the largest radiation‐hardened electronics market revenue share, of around 30%, in 2021, due to the rising demand for metal oxide silicon transistors and diodes for various high-end applications in the aerospace, military, and medical sectors. 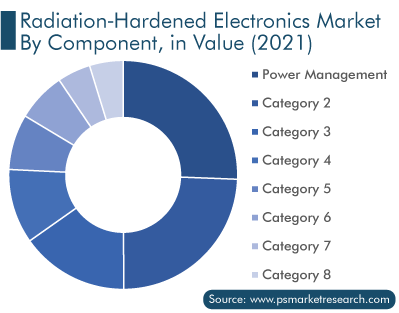 The increasing demand for reconfigurable radiation‐hardened devices creates a market opportunity for the players. These devices allow satellite users to modify their scope of operation while in orbit, thus majorly reducing the reconfiguration cost. Major companies operating in the vertical are participating in the development of new software-defined radiation-hardened electronic components.

The larger market share, of more than 60%, was held by the COTS category in 2021, attributed to the high bandwidth of COTS devices. Moreover, the emerging private spaceflight industry is primarily driven by commercial design approaches, open-system architectures, and COTS electronic technologies. Furthermore, in the healthcare industry, companies are acquiring COTS products instead of designing customized solutions, which is driving the market.

The importance of radiation-hardened electronics in space applications strongly drives the market, with this category projected to garner the fastest growth during the forecast period. This will mainly be because of the increasing global ISR operations, which is impelling market players to offer more-robust and -reliable electronic components for spacecraft.

Furthermore, the increasing number of satellites being launched drives the market. For instance, over 7,000 individual satellites were orbiting the earth as of April 2021, rising by around 30% compared to 2020. Additionally, 1,200 satellites were launched in 2020, effectively creating a record. Further, according to industry projections, around 1,000 satellites will be launched every year, which would lead to 16,000 satellites in orbit by 2028.

The RHBD category held the largest share in the market, as this method brings together several concepts, including component configuration and layout solution. This technique allows for the reconfiguration of circuit operations to prevent cell failure during missions and aids in improving reliability in harsh environments. Moreover, the majority of the radioactive material applications are witnessing the integration of electronic components made via the RHBD technique. For instance, in January 2022, BAE Systems was awarded a $60-million contract for the supply of next-generation RHBD microelectronics, by using the commercial foundry services of Intel, for the U.S. defense and aerospace community.

North America has the largest radiation‐hardened electronics market size, accounting for a revenue share of around 35%, due to the rise in the usage of advanced technologies and miniaturization of components. These trends are expected to expand the applications of radiation-hardened electronics to develop innovative and cost-effective solutions.

In the U.S., the rising demand for secure communication networks by industry players and government organizations has allowed private players, such as SpaceX and Amazon, to send communication satellites to the low earth orbit. The changing trends in space exploration, such as space tourism, with new applications and the miniaturization of components, will positively impact the market. Moreover, the country has the most satellites orbiting the earth (around 2,800).

Furthermore, Europe is expected to grow at a steady pace in the industry due to the heavy investment by regional governments in developing an enhanced space system, using advanced radiation-hardened components.

Moreover, in Europe, the major radiation‐hardened electronics market share is captured by the U.K., due to the surge in the number of spacecraft engineering organizations in the kingdom, which are increasing their efforts to ensure continuous technological advancements in nanosatellites, by using new technologies in the components, such as COTS.

Moreover, countries such as Bangladesh, Laos, and Myanmar have been buying and launching telecommunication satellites, which will drive the APAC market growth. Additionally, the APAC industry is becoming increasingly significant, with new players as well as governments concurrently developing new space systems and investing in advanced radiation-hardened components for various end users, including the medical sector and nuclear power plants, for a longer life and higher reliability. 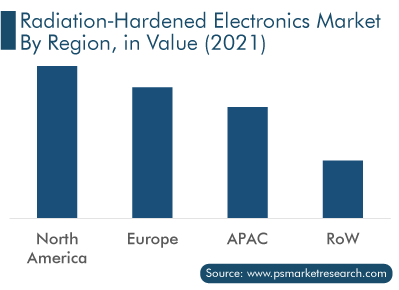 Key players in the radiation-hardened electronics industry are actively launching new products in order to strengthen their portfolios and achieve a larger market share. For instance:

Based on Manufacturing Technique

Frequently Asked Questions About This Report
What is the current size of the global radiation-hardened electronics market?+

The market for radiation-hardened electronics generated $1,539.1 million in 2021.

Which region is expected to adopt radiation-hardened electronics at a fast rate?+

The usage of radiation-hardened electronics will grow rapidly in North America, Europe, and APAC.

Which is the most-significant application in the radiation-hardened electronics industry?+

Space applications are the most significant in the radiation-hardened electronics industry.

What are the opportunities for the radiation-hardened electronics market?+

Apart from space, which applications drive the radiation-hardened electronics industry?+

Apart from space, the radiation-hardened electronics industry is driven by the rising product demand in the aerospace and defense sectors.