The global quantum dots market generated $961.4 million in 2014, owing to the growing demand for quantum dots in high-quality display devices in the electronics industry, across the globe. During the forecast period (2015–2020), the market is expected to grow at a CAGR of 30.4%. This can be attributed to the several favorable macro-economic factors, such as people’s growing fascination toward new technologies and their increasing disposable income. 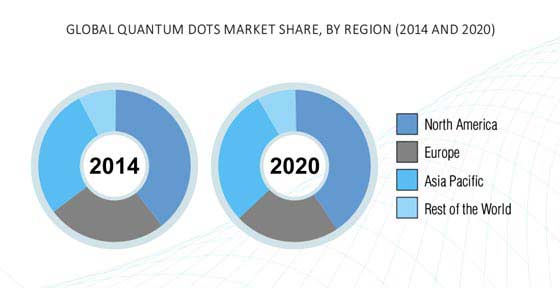 On the basis of material, the quantum dots market is categorized into cadmium selenide (CdSe), cadmium sulfide (CdS), cadmium telluride (CdTe), indium arsenide (InAs), and others. Among these, the CdSe category dominated the market in 2014, with 30.3% revenue share. This is attributed to the fact that photoluminescence and electroluminescence emission from CdSe quantum dots can be turned within a visible spectrum between wavelengths 450 nanometers (nm) and 650 nm. Owing to this characteristic, CdSe quantum dots are utilized in a wide array of applications, such as emitters for color display, color modifiers for light-emitting diodes (LEDs), optical fiber amplifiers, low-threshold lasers, and self-assembled photonic sphere arrays.

Geographically, the Asia-Pacific (APAC) quantum dots market is expected to grow at the highest CAGR during 2015–2020. This can majorly be attributed to the adoption of quantum dots technology by countries such as China, Japan, South Korea, and India. Further, quantum dots can be deployed for batteries, mobile displays, solar cells, energy storage systems, solid-state lighting solutions, and medical devices. Thus, the adoption of quantum dots products in several fields, such as optics, automotive, and consumer electronics, would drive the market growth in the coming years.

Growing display-based electronics market, across the globe, is one of the major drivers that is driving the growth of the quantum dots market. In recent years, the electronics industry has been favorable for the display market, due to which the demand for quantum dots grew at a considerable rate. Also, the high demand for smartphones and tablet personal computers (PC) has skyrocketed the demand for quantum dots in North America, Europe, and APAC. The smartphone market is growing at an average annual growth rate of over 20%. On the other hand, the tablet PC market grew at a CAGR of 52% during 2010–2013. Hence, the growing smartphone and tablet PC markets would drive the quantum dots market growth in the coming years.

Increasing disposable income and rising standard of living of people in developing countries, such as China, India, and Brazil, are generating significant opportunity for the quantum dots market. Also, most of the electronics-based products in APAC are manufactured in Japan, China, and South Korea, and their market in the entire region is expanding. Therefore, smartphone, tablet, and television markets in APAC have been rising at a higher pace. These markets generate high demand for quantum dots. Further, the growing demand for power in the region is escalating the photovoltaic industry and energy-efficient technology, which are consequently increasing the demand for quantum dots.