The major factors credited for the growth of the market include the rising prevalence of pressure ulcers, the increasing awareness about them, and the growing geriatric and obese populations. Moreover, extended bed rest due to medical illnesses, such as cancer and multiple bone fractures, can cause pressure ulcers, which increases the use of pressure relief devices.

The major end user of these devices is hospitals, which contribute more than 40% of the revenue. The hospital infrastructure has been improving over the years, and patients are willing to spend more in order to avail these facilities.

Moreover, the use of pain relief devices is set to increase at clinics and long-term care centers as well in the coming years, as the inpatient count at such facilities is increasing at a decent pace due to the rising overall patient volume across the globe. 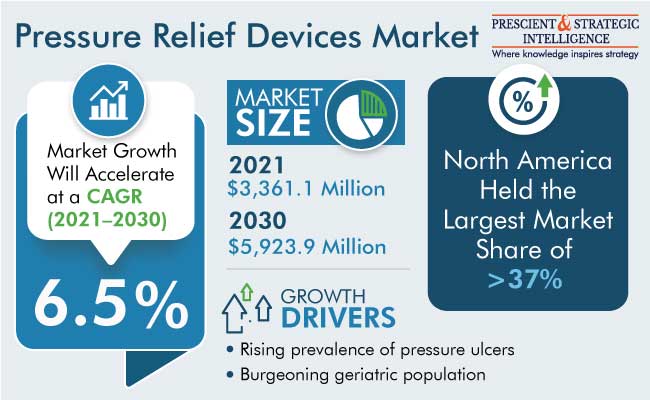 Low-tech devices accounted for the largest share, of around 65%, in 2021, and they are expected to maintain their position during the forecast period, owing to their easy operability, cost-effectiveness, and high efficiency in the prevention of ulcers. Among the low-tech devices, foam-based mattresses are the major shareholders, as they absorb the pressure of movement, which helps in uninterrupted sleep, while relieving the pain.

Gel-based mattresses are expected to witness the fastest growth during the forecast period due to their stronger therapeutic benefits in comparison to other types of low-tech mattresses.

Nevertheless, the high-tech devices category is projected to undergo substantial growth during the forecast period, owing to the technological innovations for the prevention and treatment of pressure ulcers. Among these devices, dynamic air therapy beds hold the largest share as they help in reducing the need for hospitalization in long-care facilities for pressure ulcers.

The kinetic beds category, within high-tech devices, is likely to have the fastest growth in the coming years, as they reduce the pulmonary complications for prolonged-bedrest patients. Moreover, these beds are popular in the developed economies of North America and Europe; however, developing economies, especially those in the Asia-Pacific region, are also recognizing the advantages of kinetic beds and adopting them in their healthcare infrastructure, thereby driving the market significantly. 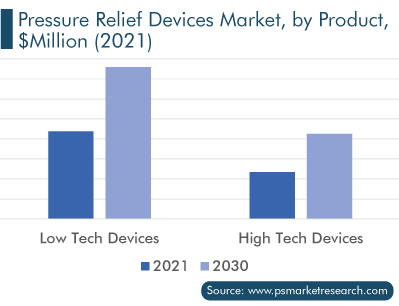 The North American market share was more than 37% in 2021, and the region is expected to maintain its dominance in the future due to the high prevalence of pressure ulcers in the region. Additionally, the existence of a mature reimbursement network, along with the government funding, is fueling the growth. Canada, with its strong focus on healthcare infrastructure, is, likewise, contributing to the market significantly, as hospitals largely utilize pain relief devices for treating pressure ulcers.

The U.S. is the major country in North America, and it is likely to undergo the faster growth during the forecast period. The growth is attributed to the surge in the research and development of new products, along with the presence of a large number of leading players in the country. For instance, a team of researchers at the Northwestern University has created a small, flexible, soft, implant that relieves pain without the need for drugs.

Europe is the second-highest revenue contributor to the market, driven by the high diagnosis and treatment rate of pressure ulcers in Western Europe, along with the strong healthcare infrastructure. Moreover, various organizations host awareness campaigns related to pressure ulcers; for instance, the European Pressure Ulcer Advisory Panel (EPUAD) holds the ‘Stop Pressure Ulcer Day’ on the third Thursday every November, to create awareness.

Germany contributes the highest revenue to the Europe’s market as it accounts for the largest elderly population in the continent, followed by the U.K. and France, thus resulting in the high adoption of pressure-relieving mattresses here. Moreover, the country has a large number of medical device companies, such as Stryker Corporation and Invacare Corporation, that offer such products.

The U.K. is the second-largest market in Europe, and it is likely to grow substantially in the coming years, owing to the reforms in the medical device regulations published by the Medicines and Healthcare Products Regulatory Agency (MHRA) in June 2022 to improve patient safety and encourage innovation.

APAC is the third-largest market, and it is set to witness the fastest growth, at a 7.2% CAGR, during the forecast period. The major factor contributing to this growth is the strategic alliances between the major players and local vendors. Various multinational companies are investing in developing countries, such as China, India, and South Korea, to reach a wider consumer base.

China is the major market in the region, and its revenue contribution is likely to surge at a significant rate during the forecast period, as it is one of the top medical device markets worldwide. The existence of diverse local manufacturers, as well as an increasing presence of overseas companies, combined with government initiatives, such as Healthy China 2020, are expected to drive the market expansion.

The technological advancements in pain relief devices, especially pain relief mattresses, are creating opportunities for the companies already operating in the space as well as for startups.

In recent years, major players in the market have been actively involved in mergers and acquisitions, along with product launches and geographical expansions. For instance,

The study offers a comprehensive market segmentation analysis along with revenue estimation for the period 2017-2030.

Frequently Asked Questions About This Report
How big is the pressure relief devices market?+

What are the key growth drivers for the pressure relief devices industry?+

The major drivers for the pressure relief devices industry are the rising prevalence of pressure ulcers and the burgeoning geriatric population.

What is the leading product type in the pressure relief devices market?+

Low-tech devices hold the largest share in the market for pressure relief devices.

What are the key opportunities in the pressure relief devices industry?+

Which region holds the largest share in the pressure relief devices market?+